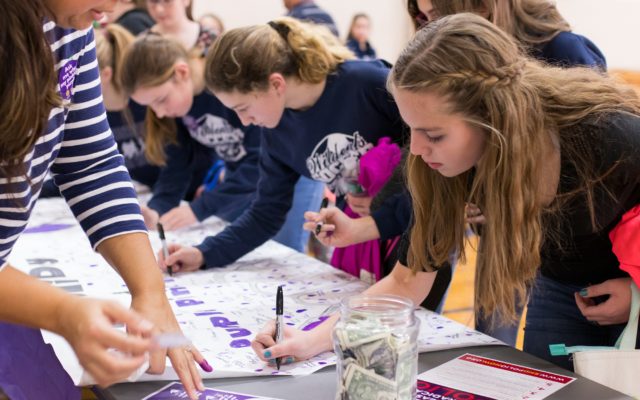 Contributed • October 22, 2019
The Presque Isle Rotary Club will host its eighth annual Purple Pinkie Project on Thursday, Oct. 24 and, with the help of the Rotary Clubs in Caribou, Fort Fairfield, Limestone, Mars Hill and Washburn, the celebration will spread throughout central Aroostook County.

PRESQUE ISLE, Maine — The Presque Isle Rotary Club will host its eighth annual Purple Pinkie Project on Thursday, Oct. 24 and, with the help of the Rotary Clubs in Caribou, Fort Fairfield, Limestone, Mars Hill and Washburn, the celebration will spread throughout central Aroostook County.

All activities raise awareness of Rotary International’s efforts to eradicate polio worldwide and raise money $1 at a time to go toward that global effort.

As they do each year, organizers and volunteers will “paint” the region purple during the Purple Pinkie Project. Similar to other projects that have been held by Rotary Clubs around the country, local organizers will host Purple Pinkie stations, encouraging people to donate $1 to have their pinkies marked with purple ink — the dollar goes to Rotary International’s “End Polio Now” campaign and the purple pinkie symbolizes one child’s life saved from the crippling disease. The estimated cost to immunize one child from polio is $1, and when each child gets immunized, Rotarians mark their pinkies with purple ink to prevent double dosages.

“We’re excited to be celebrating our eighth year of the Purple Pinkie Project in this region and to be joining with our excellent community partners, from fellow Rotarians to local schools to area businesses, in the worldwide effort to end polio,” Clint Deschene, Presque Isle Rotary Club President, said. “Our community members, especially local school children, really look forward to this event every year and the chance to help save lives from polio.”

In celebration of World Polio Day on Oct. 24, Rotarians across central Aroostook County are wearing purple polo “polio” shirts to spread awareness of Rotary’s End Polio Now efforts. Activities kick off on Oct. 24 with the Project coming to many sites in the area. Community members are encouraged to visit Purple Pinkie stations that will be set up for the public:

This year’s activities carry on a tradition of raising many local dollars for, and even more awareness about, Rotary International’s efforts to eradicate polio. The first annual World Polio Day and Purple Pinkie Project event, held in October 2012, saw an estimated 1,000 people in the community participate and initially raised $1,250. An anonymous donation of $1,000, however, pushed the fundraising total to well above $2,000. Last year’s event raised $3,000 and saw an even greater number of community members participate.

Polio has not been a problem in the U.S. for many years, but this is not the case in several developing countries. In 1985, Rotary International began raising funds in an effort to eliminate polio worldwide. By partnering with the World Health Organization and other government and private groups, Rotary International has achieved a 99 percent reduction of polio worldwide. However, there are still three countries that have not been declared polio-free—Afghanistan, Nigeria, and Pakistan. To completely wipe out polio, Rotary International is raising funds and mobilizing volunteers to bring immunization projects to these areas.

This year’s event is presented by the Rotary Clubs of Central Aroostook, and is sponsored by the University of Maine at Presque Isle and MMG Insurance. For more information, contact Rachel Rice at 768-9447 or email rachel.rice@maine.edu.

Only one member of Maine’s congressional delegation had come out in favor of impeaching President Donald Trump ahead of House Speaker Nancy Pelosi’s Tuesday announcement that the Democratic-led House of Representatives would begin an impeachment inquiry.
Apex Weather END_OF_DOCUMENT_TOKEN_TO_BE_REPLACED

High pressure will bring mostly clear to partly cloudy skies to northern Maine today and tonight as low-pressure slides east of the region in the southern part of the state.
Campaign Corner END_OF_DOCUMENT_TOKEN_TO_BE_REPLACED

Dale Crafts filed his nomination papers for Feb. 21 with the Secretary of State to officially be placed on the primary ballot on June 9, 2020, for the U.S. House of Representatives 2nd District race.
Our Sponsors END_OF_DOCUMENT_TOKEN_TO_BE_REPLACED