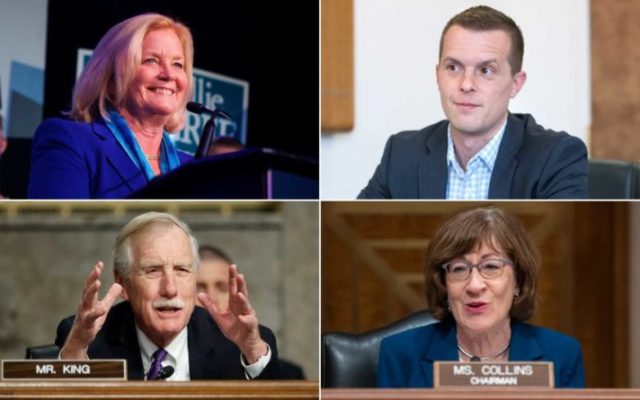 Michael Shepherd, BDN Staff • September 26, 2019
Only one member of Maine’s congressional delegation had come out in favor of impeaching President Donald Trump ahead of House Speaker Nancy Pelosi’s Tuesday announcement that the Democratic-led House of Representatives would begin an impeachment inquiry.

It centers on a whistleblower complaint that alleged Trump urged the Ukrainian president Volodymyr Zelensky to investigate if former Vice President Joe Biden misused his power by pressuring him into firing a prosecutor in 2014 while his son Hunter was on the board of a Ukranian gas company.

Two of Maine’s four members of Congress back the inquiry now, while one stopped short and another isn’t commenting. We’ll update this list as things change. If you notice that it needs changes, email politics@bangordailynews.com.

Stance on impeachment: It’s “inappropriate” to comment given the House’s role on deciding to impeach a president and the Senate’s role to vote on removal from office.

Key quote: “The ball is in the court of the House to decide whether or not impeachment proceedings are warranted,” Collins told Maine Public in May. “It is not the Senate’s job and, indeed, I think it’s inappropriate for the Senate to be commenting on that issue given our constitutional role.”

What she has said about Trump and Ukraine: Collins said in Tuesday statements that she wouldn’t be commenting on the inquiry, but that “the law is clear” that serious whistleblower complaints must be shared with congressional intelligence panels. She told reporters on Monday she would “wait until I know what really was said” before weighing in on the complaint, according to Politico.

The history: Collins told Politico in March that “we have seen no grounds at all for impeachment proceedings to be started by the House.” The centrist was one of five Republicans to vote in 1999 against convicting then-President Bill Clinton, a Democrat, on two articles of impeachment that failed in the Senate.

Stance on impeachment: In favor of an inquiry.

Key quote: “The grave nature of these recently reported actions, and the President’s admissions, require an immediate and exhaustive investigation,” he said in a Tuesday statement in which he backed a House inquiry for the first time.

The history: King, a former two-term governor in what is likely his last of two Senate terms, had been reticent on impeachment before Tuesday. In May 2017, King responded to a CNN question about whether Trump was edging closer to impeachment after a report that the president asked FBI Director James Comey to drop an investigation of Trump’s former national security adviser before firing Comey by saying “yes, simply because obstruction of justice is such a serious offense.” However, he said he’s “a conservative on impeachment” in a December appearance on NBC’s “Meet the Press” and told CNN in April impeachment would “strengthen the president.”

Stance: In favor of an inquiry.

Key quote: “I support Speaker Pelosi’s establishment of a formal impeachable inquiry into President Trump’s conduct,” she said in a Tuesday statement. “The integrity of our Republic rests on the action Congress takes now in the face of this unprecedented behavior by the President of the United States.”

The history: Pingree, who represents a reliably liberal district, was the first member of Maine’s congressional delegation to back an impeachment inquiry. She publicly called for Congress to “move toward an impeachment inquiry” in May as a response to a statement from special counsel Robert Mueller, who directed the Russia investigation. In July, she was one of 95 Democrats to vote against tabling an impeachment order in the House.

Stance: Not in favor of impeachment.

Key quote: “We didn’t get one question about impeachment, about Mueller, about ‘the squad’ [four minority women members of the House of Representatives], about socialism versus Donald Trump — none of this BS that I think drives the silent majority of Americans absolutely insane,” he told the Bangor Daily News in July about a recent meeting with constituents.

What he has said about Trump and Ukraine: “The willingness of the President to legitimize or even entertain the involvement of foreign entities in domestic affairs is of grave concern,” he said in a Tuesday statement that stopped short of endorsing the inquiry but said ensuring that Congress has access to the whistleblower complaint is “is a necessary first step.”

The history: Golden was elected narrowly in a 2018 ranked-choice voting race in the 2nd Congressional District, which is more conservative than the rest of the state and was won by Trump in 2016.