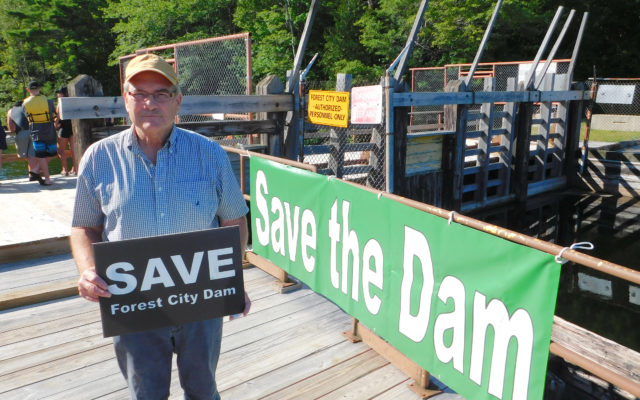 The board of directors unanimously passed a motion that the conservancy would offer to assume the legal title to the U.S. portions of the Forest City Dam and operational control over the dam, according to Mike Saunders, a CLIC board member.

More particularly, the board agreed to accept the title and operational control if both were offered by Woodland Pulp on the very conditions the pulp company previously offered to the state of Maine and the Maine Department of Inland Fisheries and Wildlife.

East Grand Lake is a nearly 16,000-acre waterbody on the international border between Maine and New Brunswick.

The controversy over the Forest City dam, which is located in Washington County, has been brewing ever since Woodland Pulp sought relief in May 2017 from the Federal Energy Regulatory Commission dam licensing requirements.

Woodland Pulp was left without a third party to take ownership and control over the Forest City Dam when Commissioner Judith Camuso of Maine Department of Fisheries & Wildlife announced at a recent technical meeting convened by the U.S. Federal Energy Regulatory Commission that her department had decided to completely withdraw from its obligations contained within an Operations and Management Agreement created in January 2018 between Woodland and the state.

According to Saunders, this agreement would have seen her department assume operational control over the Forest City Dam for fishery management, flood control and recreational purposes without any consideration of the potential benefits to power generation at Woodland’s hydroelectric generating facilities located downstream.

“One of FERC’s principal objectives when it convened its technical meeting at the East Grand School in Danforth was to explore how the decisions to store and release water at the Forest City Dam might be modified — when under the direction of IFW pursuant to the terms of that  agreement — to reduce downstream power generation to a level below FERC’s policy threshold which will trigger the requirement that the Forest City Dam must be licensed by the Commission,” Saunders said. “Convincing FERC’s staff and commissioners that the operations at the Forest City Dam do now, or will in the future, contribute insignificantly to downstream power generation has been an objective of Woodland Pulp for many decades.”

Saunders added Commissioner Camuso’s surprise announcement at the technical meeting produced some gasps from the group of about 250 concerned members of the public in attendance and appeared to leave the FERC representatives at a loss as to how to respond to this development.

Matt Manahan, Woodland Pulp’s regulatory lawyer for at least the past 27 years, responded that any efforts to explore how operations at Forest City Dam might be modified to convince FERC that any contributions to downstream power generation could be rendered insignificant were now “moot” (or no longer legally relevant to the parties).

CLIC’s board of directors is hoping that its offer to step into the same contractual arrangement Woodland Pulp offered to the state and Maine Fisheries and Wildlife will re-energize efforts by Woodland and FERC staff to explore how dam operations might continue for fishery management, flood control and recreational purposes — and yet affect downstream power generation in ways that will not require a FERC license.

CLIC said the board is prepared to create a “Dam Operations Committee” that would oversee and direct the storage and release decisions at the Forest City Dam.  The committee said they would consult with state officials regarding the creation of fishery, flood control and recreational objectives, and how best to achieve them, while ensuring that contributions to downstream power are kept to a minimum.

CLIC’s offer is subject to its performance of a “due diligence” review of the arrangement so that matters such as the structural condition of the dam can be reviewed.

Maine is more than eight months into Medicaid expansion under the federal Affordable Care Act and trends around who is enrolling and where they live are starting to emerge, bucking some expectations and pointing out access challenges.
Apex Weather END_OF_DOCUMENT_TOKEN_TO_BE_REPLACED

Low pressure will track into the Atlantic from off the Southeast coast tonight into Thursday with increased cloudiness this evening into the overnight hours.
Campaign Corner END_OF_DOCUMENT_TOKEN_TO_BE_REPLACED

Democratic presidential candidate Mike Bloomberg’s campaign will host 25 events in Maine this Saturday and Sunday as part of a nationwide “Weekend of Action” to engage supporters and build on the momentum of the campaign.
Our Sponsors END_OF_DOCUMENT_TOKEN_TO_BE_REPLACED