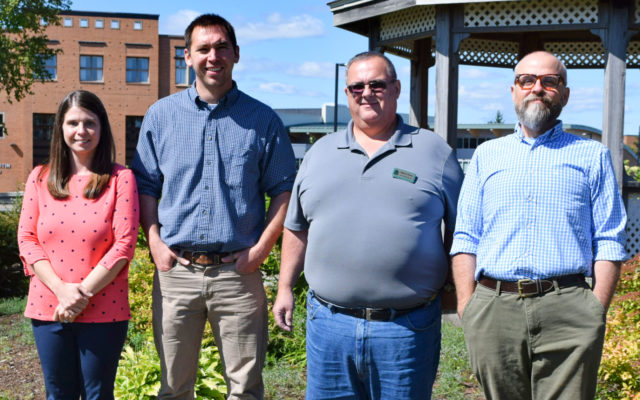 “Each of these new team members brings a level of expertise and insight that we depend on to maintain our position as a leader in higher education, and we’re excited to have them aboard,” stated NMCC President Timothy Crowley.

Prior to joining the college, Carlson worked as an English instructor for Texas Southmost College.

Lee Griffin, a Presque Isle native, has been named the new facilities manager. During his childhood, Griffin found himself captivated by mechanics and figuring out how things work. Following these interests, he pursued a degree in mechanical engineering from the University of Maine in Orono. After working as an engineering intern at Old Town Canoe, Griffin moved back to The County to work for Huber Engineered Woods in Easton, where he became a licensed professional engineer and focused his energies on plant optimization projects.

After 10 years at Huber, Griffin brings his engineering expertise to the college, where he’ll focus on optimizing the maintenance and custodial departments in an effort to achieve his goal of continuous improvement.

Jessica Lahey,RN, BSN, CMSRN, is the newest full-time nursing instructor. Originally from New Brunswick, she befriended a deaf man in her childhood and decided to learn sign language. In 2001 she graduated from St. Clair College of Applied Arts and Technology with an interpreting certificate and began working with special-needs children.

Wanting to expand her ability to help people, she earned her associate’s degree from NMCC in 2014 and her bachelor’s in nursing from University of Maine Fort Kent. She began work as an adjunct nursing instructor at NMCC in January, and now is a full-time faculty member of faculty. In December, she will begin her master’s program in nursing education at Capella University.

Her nursing philosophy is “to take care of patients the same way you would care for your own mother or family member.”

Gilles St. Pierre has been named the new water treatment technology instructor. For nearly 28 years St. Pierre worked as chief operator of the Presque Isle Sewer District. Additionally, he has worked as the superintendent of the Mapleton Sewer District for 30 years and still maintains that role today.

“I wanted to give back to an industry that’s given me a living for over 30 years,” he said.

Submitted by the Development and College Relations Office of Northern Maine Community College.

As the Maine Turnpike expects 1 million travelers alone over the Labor Day weekend, policymakers are gearing up for a sprint to solve one of the state’s most intractable problems: a long-standing — and growing — transportation funding gap.
Apex Weather END_OF_DOCUMENT_TOKEN_TO_BE_REPLACED

The Valley will receive an inch or less of accumulation from Thursday's system based on current forecast model data.
Our Sponsors END_OF_DOCUMENT_TOKEN_TO_BE_REPLACED