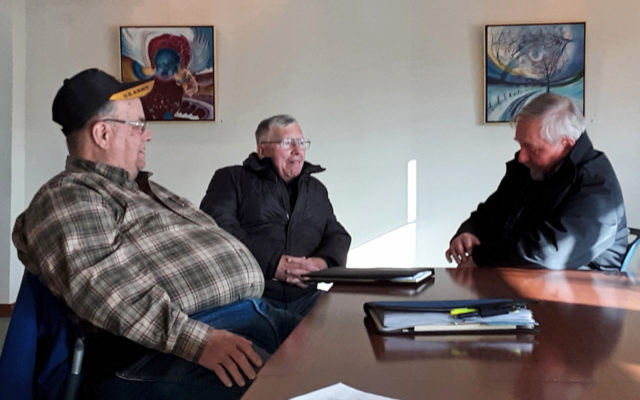 The Aroostook Veterans Advocacy Committee (AVAC) was originally launched in late 2018.   The AVAC will invite a representative from every veterans service organization in the County to participate in monthly meetings aimed at improving local health care services, educating veterans about benefits as well as other issues and to support legislation at both the state and federal levels that improves the lives of veterans and their families.

At Saturday’s meeting, the Aroostook Veterans Alliance and the United Veterans of Maine, both independent local veterans organizations, along with a representative from the local detachment of the Marine Corps League, discussed the goals and purpose of the advocacy committee.  Bill Flagg, director of community relations and development at Cary Medical Center, will lead the initial work of the organization and plans to increase membership.

“This effort reminds me of our work some 35 years ago when another group of veterans organized to establish locally available health care services for veterans here in The County,” said Flagg, who is an associate member of the Marine Corps League and deputy director of the United Veterans of Maine.

“That group of veterans, many of whom are now deceased, would not be denied and what they accomplished was truly remarkable.  I hope that we can motivate a new era of Veterans to carry on the mission,” he said.

The first priority of the AVAC is to support the expansion of the VA Community Based Outpatient Clinic at Cary.  The clinic, the first of its kind ever established in the US, ultimately became a model for the nation with hundreds of such facilities now operating throughout the country. The clinic opened in 1987 and has seen thousands of veterans for primary care and other specialty services. Plans for a needed expansion of the clinic were initiated five years ago, but have yet to be completed.

Other goals of the AVAC are to educate local veterans about the many benefits available to those who served and to help prevent veterans from getting caught up in avoidable health care costs.

Carl Olsen, a US Army veteran who served in Vietnam, said that veterans can easily get caught up in complications if they do not know how to navigate the system.

“We want to help inform veterans about the new ‘Mission Act’ and the changes that are now taking place relating to health care,” said Olsen.  “We plan to host a series of educational forums in the coming months to review these changes and help veterans get the medical care they need.”

John Deveau, an Iraq war veteran who served with the U.S. Army, is a member of the Maine House District 149 and president of the United Veterans of Maine. He agreed to take on the legislative affairs of the AVAC.  DeVeau said that with the turbulent nature of legislative action, it is important to establish a strong communications network.

Jim Gehring, who served in the U.S. Navy during the Vietnam War, is a service officer and serves in public relations for the Aroostook Veterans Alliance. He said political leaders need to hear from veterans when important issues surface.

“When a bill comes up at the federal level in Congress or at the state legislature that impacts veterans, it is critical that our representatives hear from us,” said Gehring, who has conducted a number of veterans information sessions.  “If they do not hear from us they assume that we are not interested and important legislation may simply not move ahead.”

The advocacy effort will focus on bringing the voices of veterans from throughout the Aroostook community to the table.  Craig Fay, of the Meo Bosse Detachment 1414 Marine Corps League and a Vietnam veteran, said those who came before and helped establish the VA clinic and supported the development of the Maine Veterans Home and Residential Care Facility set a standard to follow.

“It is important,” said Fay, who served as the first commandant of the Meo Bosse Detachment, “that we try and speak in one voice for all the veterans in Northern Maine.  If we are able to do that our voices will be heard just like those who spoke out nearly 40 years ago.”

Veterans organizations throughout The County are invited to choose a representative from their organization to become part of the AVAC.  The group will meet the first Saturday of every month in the Chan Center at Cary Medical Center from 11 a.m. to 1 p.m.

Submitted by the Community Relations and Development Office of Cary Medical Center.

A cold front will approach tomorrow with a chance for snow showers through the day into the evening. The front is expected to move through tomorrow night with another Arctic air mass.
Crown Politics END_OF_DOCUMENT_TOKEN_TO_BE_REPLACED

Three candidates are vying for two seats on the Fort Kent Town Council. Voters will decide which of the three -- Corey Pelletier, Brandon Dayton or Andrew Caron -- will get a seat during the town’s annual election on Monday, March 22.
Our Sponsors END_OF_DOCUMENT_TOKEN_TO_BE_REPLACED