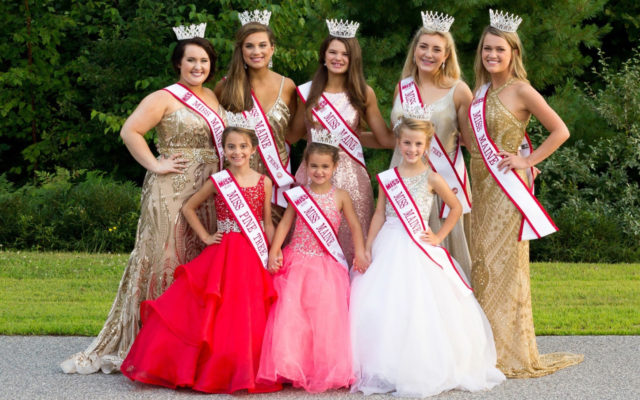 More than 100 Maine contestants vied for their respective titles. During their reign, they will have the opportunity to represent the Unite Against Bullying ME Crown CARES project in Maine Schools and communities. Combined, contestants performed over 18,000 hours of community service in the past year.

Winners will compete nationally for more than $300,000 in prizes and scholarships at several events, including the USA National Miss Scholarship Pageant in Orlando, Florida,next July and the American Women of Service Pageant in Springfield, Massachusetts. Titleholders will also travel to Saint John, New Brunswick, to attend a volunteering event and speak to 88,000 students about volunteering.

Title winners from The County included the following.

Delaney Alward, 16, was crowned USA National Miss Maine Teen 2020.  She is a junior at Presque Isle High School and is a member of the varsity cheerleading and track and field teams.  She enjoys giving back to her community and spends much of her spare time volunteering.

In addition to her title, Alward was awarded the prestigious Christenbury Scholarship Award for outstanding community service, bronze President’s Volunteer Service Award, and Role Model Award based on academics, community service and leadership.  She previously held the title of Jr. Teen for Maine and earned the National Role Model title.

She is the daughter of Chris and Wendy Maple of Mapleton and David Alward of Presque Isle.

Prince frequently volunteers at the Houlton Humane Society and Madigan Estates Nursing and Rehab Center. Along with the state title, she was first runner-up for the Bryson Taylor Publisher’s award.

She is the daughter of Seth and Jennifer Prince of Blaine.

Rhianna Desjardins, 10, was crowned the 2020 USA National Miss Maine Preteen.  Along with the state title she was awarded the Silver President’s Volunteer Award.

The first runner-up was Bailey Soucy of Houlton.

Desjardins enjoys giving back to the community through a variety of volunteer work, including Crown CARES.  She also enjoys dance, basketball, soccer, golf, and playing the piano. A high honors student, she is in sixth grade at Presque Isle Middle School. She also held the New England Princess title and competed at the national pageant in 2018.

She is the daughter of Nikki and Josh Poisson and Dave Desjardins of Presque Isle.

Emma Catherine Dolan, 5, of Van Buren was crowned the 2020 USA National Miss Maine Jr. Princess. She is in kindergarten at Van Buren District Elementary School and is also a third-year member of The Maine Dance Academy.

In her spare time, Dolan enjoys gymnastics, swimming, community service and playing with her little brother Charlie. Along with her title, she earned a Gold Presidential Service Award for the second year in a row for her over 90 hours of community service this past year. She also served as Miss Maine Preschool last year for American Women of Service.

She is the daughter of Richard Jr. and Christina Dolan of Van Buren.

The Women of Service organization aims to empower women across the country to become the best version of themselves through service. The mission is to encourage youth to serve in their communities and to create a positive, encouraging, and empowering sisterhood of youth and teens who want to motivate others through community and civic involvement and service. The platform includes bullying prevention and positive social behavior.

The 500-millibar upper-level trough associated with the cold front and low pressure that brought last evening's thunderstorms will slowly move over the Valley today and Thursday with a chance for scattered showers and an isolated thunderstorm or two across the Valley this afternoon.
Our Sponsors END_OF_DOCUMENT_TOKEN_TO_BE_REPLACED