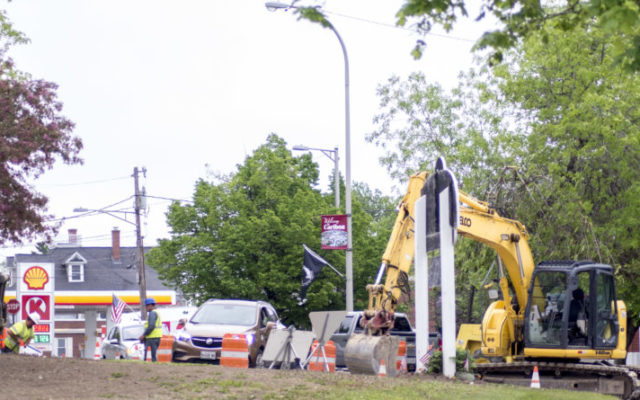 Michael Shepherd, BDN Staff • September 5, 2019
As the Maine Turnpike expects 1 million travelers alone over the Labor Day weekend, policymakers are gearing up for a sprint to solve one of the state’s most intractable problems: a long-standing — and growing — transportation funding gap.

AUGUSTA, Maine — As the Maine Turnpike expects 1 million travelers alone over the Labor Day weekend, policymakers are gearing up for a sprint to solve one of the state’s most intractable problems: a long-standing — and growing — transportation funding gap.

Last month, Maine lawmakers agreed to send a $105 million transportation bond to voters, who are likely to vote for the fifth consecutive year in November to approve borrowing that the state Department of Transportation relies on to fund routine road and bridge maintenance.

Even with the bond, Transportation Commissioner Bruce Van Note pegged the annual gap between funding and Maine’s goals for highway maintenance at $108 million. After that, runaway construction costs led the state to cancel road work. Now, the department says the shortfall is at an estimated $140 million for roads and bridges.

But it now looks like there is political will in Augusta to address the problem. The Democratic-led Legislature set up a commission set to start meeting later this month with a bipartisan goal of proposing legislation in 2020 that could set up a more sustainable funding system.

Matt Marks, the CEO of the Associated General Contractors of Maine, said the exercise would be “totally a waste of their time” if lawmakers found less than $100 million in annual funding to supplant borrowing. The politics could be tricky, but here’s how they could do it.

Lawmakers would almost certainly have to go where the money is — and gas taxes and registration fees are dominant. Transportation funding comes from a mix of sources. Over two years, 39 percent of the funding for projects in the department’s work plan will come from the state’s Highway Fund, 32 percent from the federal government and 20 percent from bonding.

Transportation funding is a state and national problem. The federal gas tax of 18.4 cents per gallon hasn’t been raised since 1993. Maine has a middle-of-the-pack state gas tax of 30 cents and indexing of the tax was eliminated in 2011 under former Republican Gov. Paul LePage.

During that time, the gas tax has become a less efficient way to fund transportation as higher-efficiency vehicles have become prevalent. Maine’s Highway Fund had more money in it in 2006 than it did in 2017. The diminished gas taxes still account for 69 percent of the fund with vehicle registrations and fees making up most of the rest at 26.5 percent.

A one-cent increase in Maine’s gas tax would raise $7.5 million, according to transportation department spokesman Paul Merrill. For illustrative purposes, a 10-cent hike could generate $75 million for roads and bridges and $27 million could be raised with a 15 percent increase in registration fees relative to current levels, getting the state above the $100 million mark.

Such a large tax increase could be politically unpalatable, so transfers and smaller tax hikes could be mixed in to offset them. Gas tax and registration fees increases have been the centerpiece for funding bills — including from Rep. Andrew McLean, D-Gorham, the co-chair of the Legislature’s Transportation Committee — floated in Maine alongside smaller-scale changes that would likely be part of any omnibus solution. They haven’t gone anywhere yet.

In a wide-ranging bill earlier this year, McLean also proposed a $9.5 million increase in special fuel taxes, a $1.9 million tax increase on short-term vehicle rentals and a $1.3 million transfer of sales tax revenue from transportation-related items.

Two years ago, a Republican-led proposal would have shifted all sales tax revenue from sales of vehicles and other products to the Highway Fund from the state budget. They have proposed $3 million in annual fees on hybrid and electric vehicles opposed by environmental groups.

The revenue transfer would have brought an estimated $230 million into the fund annually, but it would have created the need for tax increases or spending reductions in the state budget. However, a similar — though smaller — transfer could be part of a grand bargain.

Members of the commission aren’t showing their cards yet, but there seems to be a willingness to negotiate. LePage stood against state gas tax increases during his tenure, which made it difficult to consider funding changes. They’re supported by groups including the U.S. Chamber of Commerce, the Maine contractors’ group, AAA and the American Trucking Associations as the easiest way to increase funding.

Over the long term, taxes on vehicle miles traveled or increased tolling — which are being tested in other states — could supplant the gas tax. The new, 15-member commission is tasked with looking at short- and long-term funding and reporting a bill back to the Legislature in 2020.

The administration of Democratic Gov. Janet Mills is staying quiet on funding proposals until the first meeting on Sept. 17. Merrill, the transportation department spokesman, said the commission should “start with a clean slate and do the work it’s been tasked to do.”

Peter Mills, the executive director of the Maine Turnpike Authority and the governor’s brother, said the group’s work will depend on two things: where Van Note wants to go and “where does he have permission to go” from Janet Mills.

McLean, who will co-chair the commission, said it was “totally fair” to discuss tax and fee increases along with potential transfers smaller than the one proposed in 2017 as a possible solution. Rep. Tom Martin, R-Greene, a commission member, said no solution was off the table.

“The folks who worked on this commission didn’t do it so we could sit around and twiddle our thumbs,” McLean said. “We want to come up with a solution and we want to push it forward this year.”

A weak disturbance will drop down from the northwest tonight triggering some snow showers across Fort Kent and vicinity as it moves through with no significant accumulation expected.
Our Sponsors END_OF_DOCUMENT_TOKEN_TO_BE_REPLACED