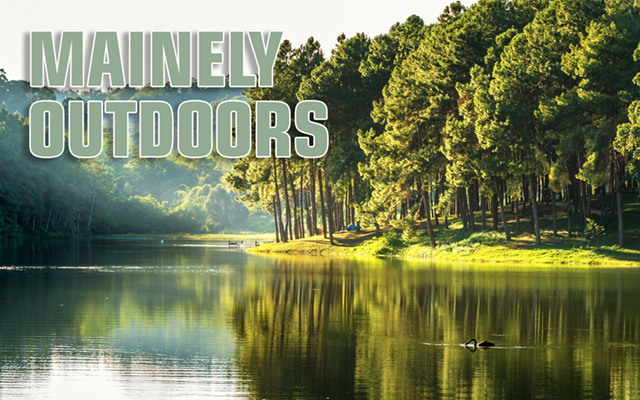 Hop to it and try these flies on the water

Bill Graves , Special to the Fiddlehead Focus • August 26, 2019
Anyone who doesn’t believe in global warming must have been traveling away from Aroostook County the last few weeks. Regional stream levels are dropping and water temperatures are rising at an alarming rate.

Anyone who doesn’t believe in global warming must have been traveling away from Aroostook County the last few weeks. Regional stream levels are dropping and water temperatures are rising at an alarming rate. Fishermen and farmers are praying for rain, and not just a thunderstorm — a couple of days of steady, cool, long-term precipitation. Until conditions change the trout will remain schooled up, spooky and contained in cooler locations.

Brook trout survive the elevated water temps and reduced oxygen levels by their natural instinct to locate and take full advantage of Mother Nature’s liquid air conditioning. Deep holes, shaded bank undercuts, ledge seeps, creek inlets and spring holes all offer cooler, comfortable water conditions. I’ve seen 200 trout bunched together in a spot no larger than a Volkswagen Bug. Regardless of the humid, torrid weather, trout still need to eat. The trick for angling success is to be on hand with the correct fly patterns and size when it’s mealtime. 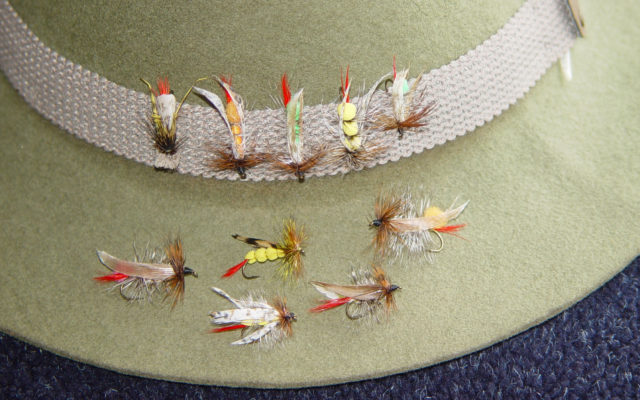 There are dozens of very different patterns for grasshopper flies, and when you add varied hook sizes and body colors the selection grows further. Shown are a few of the more basic patterns that work well throughout Aroostook waterways. (Courtesy of Bill Graves)

During long spells of hot, sunny days, brook trout tend to be most active just after dawn and an hour or so before dark. Even during these daily feeding periods, due to the water and weather conditions the fish will not move too far from their holding location to strike a fly. Dry fly patterns seem to be the most productive during dog-day weather conditions, possibly due to the ongoing hatches of many species of insects. Occasionally a colorful wet fly will stir up some action on small brooks that feature colder water, but it’s hard to beat a mosquito, gray slim Jim, blue dun, light Cahill and Henryville special floating high and dry.

There is another dry fly option that actually works all day, any day, during muggy, high heat summer weeks, especially on rivers and streams flowing though forests and farm fields. A life size, well-tied grasshopper imitation always seems to stir up some action, especially on larger size trout seeking lots of food in a single gulp. 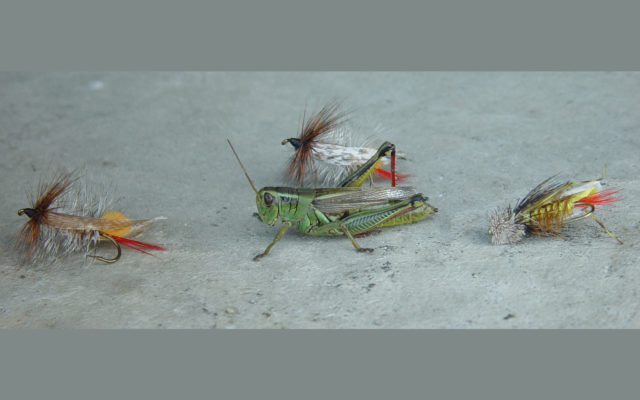 The real, live grasshopper in the center of the photo is a true taste treat for any brook trout. The hand-tied imitations offer steady fishing action on regional brooks and streams. (Courtesy of Bill Graves)

There are at least a dozen “bug” patterns, officially named terrestrials, that will often catch fish on the warmest day; crickets, bees, spiders, caterpillars, and beetles all work regionally, but ’hoppers still top my list. For anglers not familiar with these buggy imitations, it might surprise you to know that there are actually dozens. One of my books of fly patterns has tying instructions and photos of 17 different grasshopper flies.  A handful are a bit complicated to tie, since they use a wide array of feathers and fur to create a body, head, legs, wings, eyes and even antennae.

I’ve settled on two basic body styles that are fairly quick and simple to tie, even for a novice at the fly vise, and both are very productive.

The most basic pattern is called Joe’s Hopper. In its original pattern the body is yellow yarn with a looped tail and wound brown hackle clipped short. The tail is red hackle barbs and the head hackle is mixed brown and grizzly tied thick. The wings of mottled turkey wing quill lie along the side, not on top of the body, go clear to the tail and are coated with vinyl cement for form and toughness. This is an age-old favorite on local brooks.

At some point over the years, a forward-thinking fly tier decided to use colored foam as the body material rather than wool.  As well as the original yellow, the foam bodies are often tied with green or orange; they certainly float higher and longer as well as being brighter and vivid on the water.  Usually grasshopper flies are tied on size 6 to 12, 2X, dry fly hooks.

Since low, clear water makes trout even more aware and spooky, it’s good to stop wading a good distance from likely pools and make long, soft casts. I’d suggest at least a 9-foot leader. Drop the hopper fly a couple of feet upstream of the lie and let it slowly float over. When a trout is hooked and played, allow a few minutes before offering another cast so the school can settle down.

On grass-lined streams I use a different casting style, especially near bank undercuts, and it has fooled some really big brookies. I actually cast my ’hopper long and light so it drifts down and settles on top of the grass, reeds or leaves along the bank edge. Then I give it a tug so it plops into the water. Gently shaking my rod tip causes the terrestrial fly to jiggle and shake as a bug that accidentally fell into the brook might. An easy meal. It drives the trout crazy.

Don’t stay home on the hot, bright days or just venture out at dawn and dusk. Buy or tie a few grasshopper flies and give then a try on area brooks and rivers. You’ll be amazed how well a common natural food specimen works. August is a perfect month for terrestrials, so “Hop to it.”

As the Maine Turnpike expects 1 million travelers alone over the Labor Day weekend, policymakers are gearing up for a sprint to solve one of the state’s most intractable problems: a long-standing — and growing — transportation funding gap.
Apex Weather END_OF_DOCUMENT_TOKEN_TO_BE_REPLACED

A cold front moved through the Valley early this morning, and it will be followed by an Arctic cold front this afternoon.
Campaign Corner END_OF_DOCUMENT_TOKEN_TO_BE_REPLACED