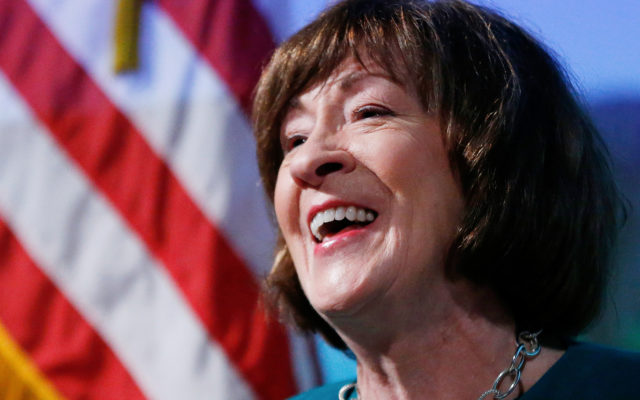 By U.S. Sen. Susan M. Collins, R-Maine • August 16, 2019
Diagnosed just before she turned 2 years old, Ruby Anderson, a 9-year-old girl from Yarmouth, does not remember living without Type 1 diabetes.  She is determined to keep a positive attitude, however, and has worked to raise awareness at her school and is an advocate for Type 1 diabetes research.

Diagnosed just before she turned 2 years old, Ruby Anderson, a 9-year-old girl from Yarmouth, does not remember living without Type 1 diabetes.  She is determined to keep a positive attitude, however, and has worked to raise awareness at her school and is an advocate for Type 1 diabetes research.

As the founder and co-chair of the Senate Diabetes Caucus, I was delighted to invite Ruby to testify at a recent Aging Committee hearing on how the Special Diabetes Program is changing the lives of Americans with Type 1 diabetes.  The hearing was held in conjunction with the Juvenile Diabetes Research Foundation Children’s Congress, a biennial event that began in 1999.

Approximately 165 Children’s Congress delegates ages 4-17 from all 50 states attended the hearing, including Lydia Bryant of Ellsworth, a 9-year-old who was diagnosed with Type 1 diabetes last year.  The presence of these children wearing their blue T-shirts is inspiring. Their courage and determination to meet the challenges of Type 1 diabetes are extraordinary.

Ruby told the committee that she plans to become a scientist to research Type 1 diabetes when she grows up.  “And if they haven’t found a cure for diabetes by then, I will,” she declared. “And when we have a cure, I’m going to have a party and invite everyone in the whole entire world. Senator Collins, you will be first on my list.”  That touched my heart.

I am so proud of Maine’s two Children’s Congress delegates, Ruby and Lydia, for sharing their experiences with Type 1 diabetes and advocating for continued robust research funding.  Since the last Children’s Congress two years ago, we have made remarkable strides to change the lives of Americans with Type 1 diabetes. These advances have only been possible due to a bipartisan commitment in Congress to fund diabetes research, which has increased from $319 million when I founded the Senate Diabetes Caucus in 1997 to more than $1 billion last year.  We must keep our foot on the accelerator.

Ruby is one of the approximately 1.25 million Americans — including 200,000 youth — living with Type 1 diabetes.  In her testimony, she discussed the impact of diabetes on her life and the hope ongoing research brings to her and to her family.

Advancements in technology to treat the disease have made Ruby’s life easier.  For instance, she used to have to check her blood sugar up to 10 times a day. A little over a year ago, she began using a continuous glucose monitor, which allows her to check her blood sugar on her phone and lets her go weeks without needing to prick her finger.  She has also used an Omnipod insulin pump since she was about three years old.

Another great advancement since the last Children’s Congress is the Food and Drug Administration approval of an artificial pancreas system for children ages 14 and older.  Now, the artificial pancreas is also available for kids who are ages 7 to 13, opening the door for better day-to-day management of diabetes.

Today’s research represents tomorrow’s cure. Just last month, a new study, the first of its kind, illustrated the potential of an immunotherapy drug to delay the onset of Type 1 diabetes by an average of two years.  What a significant breakthrough.

The Special Diabetes Program has contributed to phenomenal discoveries, especially advancements in technology.  This program provides an additional $150 million each year for Type 1 diabetes research.  Another equally important aim of this program is to study diabetes in American Indians and Alaskan Natives, who experience Type 2 diabetes at nearly three times the rate of the national average.

This research is especially important as the cost of managing diabetes grows at an alarming rate. Between 2012 and 2016, average insulin spending for patients with Type 1 diabetes nearly doubled. Last year, a father in Maine testified that he turned to drug importation from Canada after the price of a 90-day supply of insulin for his son with Type 1 tripled to $900.  Addressing the rising costs of prescription drugs is among my top priorities, and I have authored successful legislation to improve generic competition and reduce costs.

In total, over the past 22 years, the Special Diabetes Program has contributed $2.8 billion to improve the lives of people with diabetes.  It is crucial that Congress renews this proven program before it expires on Sept. 30 to continue the progress we have made in new treatments, more effective management technologies, and ultimately a cure.   With advocates like Ruby and Lydia helping to lead the way, I am confident we will do so.