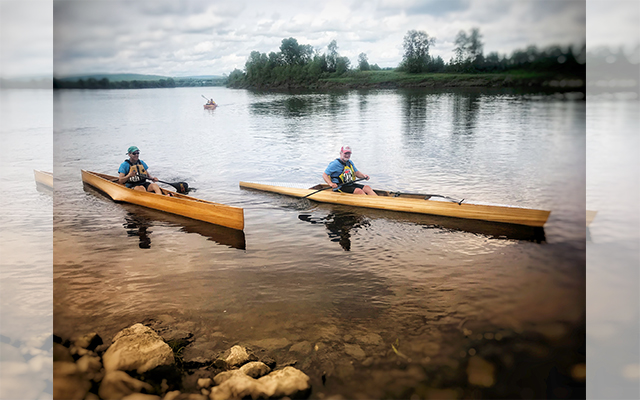 The race over Father’s Day weekend landed on one of the warmest days in the Valley this season, with temperatures hovering around 80 degrees. Despite the warm air, however, the National Weather Service issued a “cold water safety message” Saturday morning, warning northern Mainers against spending extended periods of time in the water.

According to the message, the warm air could have caused “people to underestimate the dangers of the cold water temperatures,” which were in the upper 50s and lower 60s and could cause hypothermia to anyone immersed for too long.

The warning did not deter any of the participants, but they all took precautions to wear life jackets. The race was composed of 20 vessels of various types, including individual and doubles kayaks, racing canoes and larger canoes for multiple riders.

The race began at the Madawaska boat landing, where the racers entered the water one by one and raced against the clock and other racers 10 miles down the river to the Grand Isle boat landing. Most participants enjoyed a comfortable two-hour pace with the current on the St. John River.

David McCrossin raced alongside his friend Fran Cyr. The men from Caribou won first and second place for the racing canoe category this year. McCrossin built his canoe with wood from Madawaska in 2011. This year, McCrossin and Cyr started in their canoes from the back of the race and finished first and second, respectively.

“It gets very competitive,” McCrossin said. “Over the years it has gotten very competitive, when there’s only a couple of us sitting on the water like this, we’re going fast, but not really hard.”

Both Cyr and McCrossin said this year’s race was more of a training for them.

“Being outdoors, seeing the people, getting the exercise, traveling … all some things that make this very fun,” Cyr said. “Today, we’re not being very competitive, we’re just out here having fun.”

A list of all the winners can be found on the Grand Isle Annual Kayak Race Facebook page.

The upper-level low pressure area that has been parked over southern New England will continue to stall there today into the overnight period then begin to open up and shift southeast into the Atlantic Thursday.
Campaign Corner END_OF_DOCUMENT_TOKEN_TO_BE_REPLACED

Dale Crafts filed his nomination papers for Feb. 21 with the Secretary of State to officially be placed on the primary ballot on June 9, 2020, for the U.S. House of Representatives 2nd District race.
Our Sponsors END_OF_DOCUMENT_TOKEN_TO_BE_REPLACED