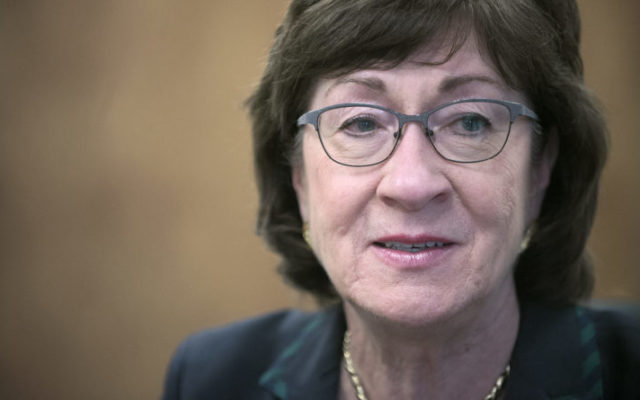 Michael Shepherd, BDN Staff • June 18, 2019
U.S. Sen. Susan Collins cast her 7,000th consecutive vote on Tuesday, continuing a streak that began when she took office in 1997 and becoming the third senator to reach that roll-call mark.

U.S. Sen. Susan Collins cast her 7,000th consecutive vote on Tuesday, continuing a streak that began when she took office in 1997 and becoming the third senator to reach that roll-call mark.

The four-term senator from Maine hit that milestone with a vote to advance President Donald Trump’s nominee to lead a foreign aid agency. In a floor speech, Collins called it a “momentous occasion” for her, and Sen. Angus King, I-Maine, called it an “extraordinary achievement.”

The record for consecutive votes was held by Collins’ idol, Maine Sen. Margaret Chase Smith, who cast 2,941 consecutive votes between 1955 and 1968 until recovery from hip surgery ended her streak. King gave Collins a red rose — which Smith wore on her lapel — after the vote.

The late Sen. William Proxmire, D-Wisconsin, who broke Smith’s record, holds it now with 10,252 votes between 1966 and 1988. One active senator, Chuck Grassley, R-Iowa, has more consecutive votes than Collins, casting more than 8,000 votes since 1993.

The Senate delayed votes last year so the Maine senator could attend her father’s funeral. She has suffered broken ankles three times in her Senate career, and she told Roll Call that she once got off a plane preparing for take-off when a floor schedule changed.

She will have to be re-elected once and likely twice to reach Proxmire’s record. Her 6,000th vote came in September 2015. Collins is a top Democratic targetin her bid for a fifth term in 2020 after her November vote for U.S. Supreme Court Justice Brett Kavanaugh.

Lobbyist Betsy Sweet of Democrat is the best-known Democrat to declare a run against Collins. House Speaker Sara Gideon of Freeport is likely to join her soon and Secretary of State Matt Dunlap of Old Town is also considering a run. Collins is being challenged in a Republican primary by conservative activist Derek Levasseur of Fairfield.

The upper-level low pressure area that has been parked over southern New England will continue to stall there today into the overnight period then begin to open up and shift southeast into the Atlantic Thursday.
Campaign Corner END_OF_DOCUMENT_TOKEN_TO_BE_REPLACED

Dale Crafts filed his nomination papers for Feb. 21 with the Secretary of State to officially be placed on the primary ballot on June 9, 2020, for the U.S. House of Representatives 2nd District race.
Our Sponsors END_OF_DOCUMENT_TOKEN_TO_BE_REPLACED