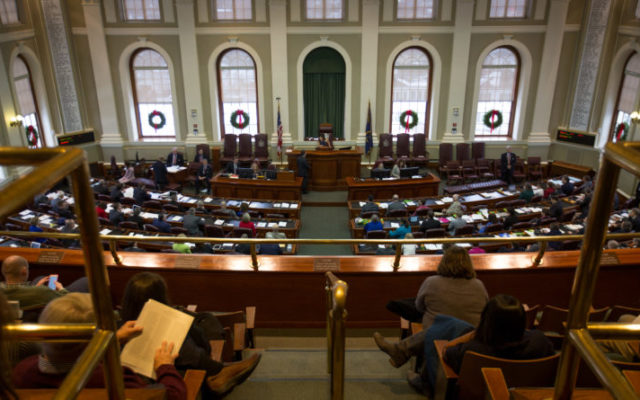 Republicans were able to water down changes that Democrats and labor groups wanted to the workers’ compensation system ahead of the budget vote. As the consensus budget negotiations ramped up, there were two Democratic priorities that Republicans were potentially looking to leverage: changes to Maine’s workers’ compensation system and a bill to allow state money to cover abortions under the MaineCare program.

Only the first issue ended up threatening the budget talks after Democrats moved along party lines on the budget-writing committee last week to put the abortion bill up for votes in the chambers. It passed without a Republican vote and was signed into law by Gov. Janet Mills.

Votes on the budget began on Friday with most Republicans holding out to prevent the two-thirds majorities that would be necessary to pass the budget in a round of later votes. However, the threat passed by that later round of votes on the budget, which was accompanied by the easy passage of a workers’ compensation reform bill in the House of Representatives.

Legislative Democrats came into the 2019 session pushing a series of aggressive reform proposals that ended up in a three-way split by late May. Democrats had their own proposal — which would have sharply increased benefits and costs of the program — plus a compromise between Democrats, labor and business groups and a Republican proposal.

They landed somewhere in between. Democrats succeeded in raising the maximum benefit cap from Maine’s average weekly wage to 125 percent of it, while Republicans won some systemic changes — including a notice requirement — that businesses wanted.

There will only be $6 million split between the parties available to pay for more than $800 million in proposals that are awaiting funding. Rep. Sawin Millett of Waterford, a chief Republican budget negotiator, said on Friday that the two-year budget — which will take effect on July 1 after an expected Mills signature — will build in just $6 million to cover bills that the Legislature has initially approved but will need funding to take effect.

That’s a relatively large amount of money relative to past budget cycles, but it’s a pittance relative to that wish list of bills, which was driven by Democrats north of $800 million over two years. Almost all of them will die, though Democrats and Republicans will split the $6 million evenly between their pet projects.

A legislative committee will work to whittle down more than $1.5 billion in bond proposals and the chambers will be busy disposing of bills. The highlight of the day in the State House will be a morning hearing on the bond package that voters will see in November 2019. Lawmakers proposed more than $1.5 billion in bond proposals this year, but the budget-writing committee will take testimony on some of them today and may vote on a consensus package that would need two-thirds support in both chambers to go to voters.

They include a package backed by Mills that would ask voters to borrow $189 million this year on a package centered on road and bridge funding, conservation and workforce development and another $50 million in 2020 on rural broadband upgrades and economic development. The other proposals to be considered on Monday are mostly in those subject areas.

The House and Senate have busy calendars ahead of scheduled adjournment on Wednesday. The schedule is uncertain, but the House is expected to hold a final vote on a bill that would have Maine join a compact of states looking to turn the Electoral College into a majority system.

— Maine’s largest city continues to grapple with an influx of asylum seekers. As of Friday, more than 175 had arrived in Portland within the past week. Many are fleeing violence in their home countries of Angola and the Democratic Republic of the Congo. They are arriving in Portland because of a change in federal policy that sends asylum seekers to their stated destination city while their applications to live in the United States are processed. City resources are being used to house and provide for the new arrivals, but volunteer efforts to aid them also have sprung up. For example, Anna Bullett, director of the Cumberland County WIC (Women, Infants and Children) program at Opportunity Alliance, created an Amazon “list” of items in need, which allows donors to order the items on the website and have them shipped directly to Opportunity Alliance, which will distribute them directly to the families.

— Meanwhile, Collins will break with the president to vote against a third judicial nominee. On Friday, Maine’s senior senator said she would vote against President Donald Trump’s nomination of Matthew Kacsmaryk to a federal district court judgeship because of his “alarming bias against LGBTQ Americans and disregard for Supreme Court precedents.” While Collins’ opposition is unlikely to derail Kacsmaryk’s confirmation to be a district judge in the Northern District of Texas, the Washington Post said it is notable given the intense backlash she faced from liberals after voting for U.S. Supreme Court Justice Brett Kavanaugh last year.

— Maine regulators and lawmakers are inching closer to finalizing plans for the state’s adult-use recreational marijuana market. Unless you live in a community that opts in to the program, don’t expect to be able to get your pot at a little shop around the corner. But do expect high prices, especially at the outset. Click here to see what medical marijuana growers, regulators and data from other states reveal what the first year of legal non-medical marijuana sales in Maine could look like.

— Maine’s former governor has a new job. After spending the winter in Florida, former Gov. Paul LePage is back in Maine and tending bar at a restaurant in Boothbay Harbor. Jeff Stoddard, who owns the restaurant, said he hadn’t finalized the former governor’s schedule yet, but he anticipated LePage will work the entire summer at the seaside restaurant, where the governor’s wife, Ann, and daughter, Lauren, have worked as servers in previous years. LePage also will apparently take time off from work to headline a reception for Maine Republican Party chair Demi Kouzounas at the Senator Inn in Augusta on June 27.

A Canadian supermarket chain has taken a unique approach to discouraging the use of plastic shopping bags.

They are supposed to be embarrassing. But I want them all.

I realize that I’m not the target audience for a Canadian environmental public shaming campaign, but this strategy would have the opposite effect on me. I would go out of my way to get those bags, fees and public shaming be damned.

They trigger the same “no shame” instinct that tempts me to accelerate when I see a roadside speed monitoring sign because I want to make it light up. Maybe I spent too much time at carnivals as a kid, trying to activate lights, bells and buzzers designed to provide instant gratification to suckers who would keep paying for it. Or maybe my parents entered me into some kind of Pavlovian experiment when I was too young to remember, setting me on a path to collecting shiny objects and oddities for the rest of my life.

For now, I’ll just go back to scanning the internet for the best price on a trip to The Colon Care Co-op. Here is your soundtrack. — Robert Long

Today’s Daily Brief was written by Michael Shepherd and Robert Long. If you’re reading this on the BDN’s website or were forwarded it, click here to receive Maine’s leading newsletter on state politics via email on weekday mornings. Click here to subscribe to the BDN.

As the Maine Turnpike expects 1 million travelers alone over the Labor Day weekend, policymakers are gearing up for a sprint to solve one of the state’s most intractable problems: a long-standing — and growing — transportation funding gap.
Apex Weather END_OF_DOCUMENT_TOKEN_TO_BE_REPLACED

A strong Arctic cold front will push into the region from the northwest tomorrow with a chance for some light snow across the region.
Our Sponsors END_OF_DOCUMENT_TOKEN_TO_BE_REPLACED