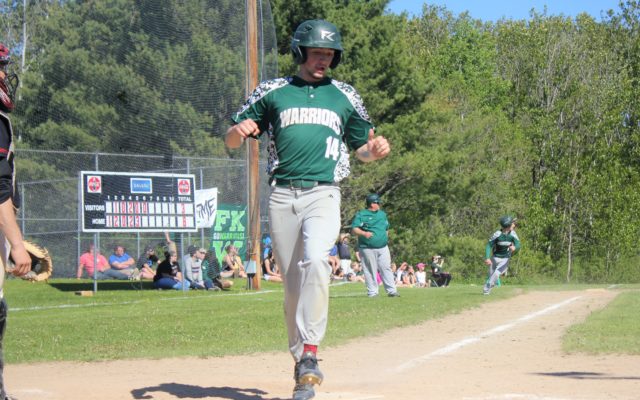 FORT KENT, Maine — A team effort by the Fort Kent Community High School Warriors including 13 base hits among six players resulted in a one-run win over Central High School of East Corinth in the Class C North Semifinal game in Fort Kent on Saturday, June 8.

The Warriors’ 9-8 victory secured the team a berth in the Class C North Regional Championship.

The No. 2 Warriors inched out the win over the No. 3 seeded Red Devils at the bottom of the seventh inning. Tied at 8-8, Warrior Eden Paradis, who was first to bat on the inning, said he knew his team needed just one run to seal the win. Paradis obliged by hitting a double.

“I just had to stay as calm as I could. I knew I could do it but I had to stay calm and let him pitch to me,” Paradis said of his at bat.

Kayden Nadeau answered the call for a game-winning hit in the clutch when he stepped up to the plate right after Paradis and batted another double.

“As soon as he hit it, I knew I’d have a chance and I went for it,” Paradis said.

“This is the farthest we’ve made it,” said Warriors head coach Tracey Hartt of the semifinal win. “We’ve lost this game before.”

Hartt attributed the win to the entire Warrior roster due to the efforts the athletes made to accomplish a 15-1 season and go on to win two playoff games so far.

“They are all good athletes; they deserve to be here,” Hartt said. “All year long the guys on that field gave it all they got. The thing I have been proudest of the most is that when one player was off, the others stepped up. This was a team effort.”

The winner of Wednesday’s game between Fort Kent and Orono will head to the 2019 Maine State Baseball Championship on Saturday, June 15, also at Mansfield Stadium.

Whatever the outcome of the regional championship, Hartt, who has coached the Warriors for nine years, said he is proud of what his players did to elevate the reputation of Warrior baseball.

“They used to say Fort Kent was not known for baseball; they are now,” Hartt said.

As the Maine Turnpike expects 1 million travelers alone over the Labor Day weekend, policymakers are gearing up for a sprint to solve one of the state’s most intractable problems: a long-standing — and growing — transportation funding gap.
Apex Weather END_OF_DOCUMENT_TOKEN_TO_BE_REPLACED

Low pressure will move towards the Northeast from a low pressure over the Ohio Valley/Pennsylvania region this evening with the primary low tracking into Québec tomorrow.
Campaign Corner END_OF_DOCUMENT_TOKEN_TO_BE_REPLACED

U.S. Senator Angus King (I-Maine) today visited with students at the University of Maine at Fort Kent (UMFK) to discuss his work in Maine and Washington and answer questions from students.
Our Sponsors END_OF_DOCUMENT_TOKEN_TO_BE_REPLACED