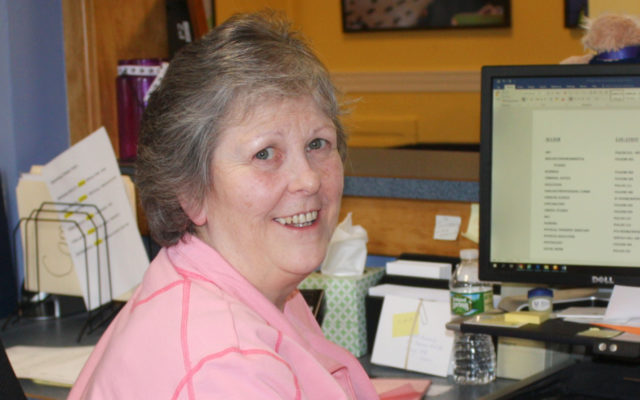 Melissa Lizotte • May 30, 2019
Wherever Nancy Nichols of Presque Isle has lived, she has dedicated her career to giving back to people in her community and helping to create new, exciting opportunities for professional and personal growth.

Wherever Nancy Nichols of Presque Isle has lived, she has dedicated her career to giving back to people in her community and helping to create new, exciting opportunities for professional and personal growth.

Before entering her current position as administrative specialist for the University of Maine at Presque Isle’s admissions office, Nichols spent 23 years in municipal government. She began her journey by serving her hometown of Madawaska as the community development director, becoming the youngest such director in the state at that time.

Nichols considers the five years she spent in Madawaska to have been some of the most rewarding of her career. She helped the town receive grants to rehabilitate older homes and promote downtown revitalization. Though she graduated with an associate’s degree in the executive secretary program at Thomas College in Waterville, Nichols thinks returning to Aroostook County was one of the best decisions she has ever made.

“I’m a County girl. At one time I thought about staying in Waterville, but I wanted to be closer to family,” Nichols said. “I was blessed to find a position where I was able to make a difference.”

After grant funding for Madawaska’s community development office ran out in 1992, Nichols decided to try her luck in Presque Isle. She became city planner and worked with the city’s planning board to obtain grants and implement new projects and initiatives. One of her favorite projects involved creating an Arbor Day Council and planting apple trees along a bike path near the Skyway Industrial Council that are still standing today.

In 1997 Nichols applied for and was accepted for the position of Presque Isle city clerk after budget cuts eliminated the city planner position. For the next 13 years, she assisted residents with everything from motor vehicle registration, hunting and fishing licenses and dog licenses. She also kept records for all city council meetings, coordinated local voting sites for elections and witnessed the transition from typewriters and paper files to computers and electronic records.

In fact, being city clerk was how Nichols found her longtime furry friend Sheba, a cocker spaniel/shih tzu mix, who lived for over 15 years.

“A woman had come in to register her two chihuahuas and mentioned that she had this 3-month-old puppy that the mother couldn’t feed,” Nichols said. “I took one look at that pup and fell in love and so did my husband, Stephen.”

Nichols has always loved animals. She served on the board of directors for the Central Aroostook Humane Society for six years and still helps with the organization’s biggest event, the Toast to the Animals, every fall. She is also a member of UMPI’s Relay for Life team, for which she has raised large amounts of funds with her homemade fudge.

During her time as city clerk, the Maine Town and City Clerks Association named Nichols the Clerk of the Year in 2009. She estimates that she must have interacted with thousands of people, from Presque Isle residents to folks visiting the area on vacation.

“I’ve always been one to pay it forward. I enjoyed being an ambassador for the city,” Nichols said. “Whenever I went to meetings downstate, people referred to me as ‘Nancy from Presque Isle’ and I was proud of that.”

In 2010 Nichols left the city offices after deciding that she needed a career change. She worked at Aroostook County Action Program briefly before becoming part of the admissions team at UMPI. She enjoys being a “behind-the-scenes” person on campus, helping prospective students feel welcome during individual and group visits and coordinating large events geared toward potential and accepted students.

“In the back of my mind I always thought ‘It must be nice to work at the university,’” Nichols said. “This position is right up my alley because I like taking care of people and making sure they have great experiences here.”

The upper-level low pressure area that has been parked over southern New England will continue to stall there today into the overnight period then begin to open up and shift southeast into the Atlantic Thursday.
Campaign Corner END_OF_DOCUMENT_TOKEN_TO_BE_REPLACED

Dale Crafts filed his nomination papers for Feb. 21 with the Secretary of State to officially be placed on the primary ballot on June 9, 2020, for the U.S. House of Representatives 2nd District race.
Our Sponsors END_OF_DOCUMENT_TOKEN_TO_BE_REPLACED