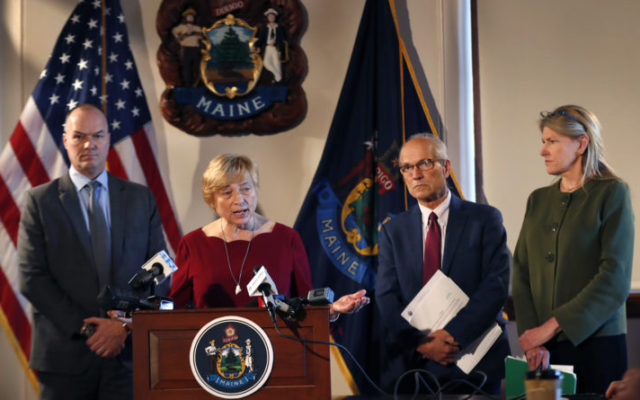 Alex Acquisto, The Forecaster • May 16, 2019
Democratic Gov. Janet Mills, in her proposed two-year budget, is heeding advice from an auditor of the state’s child protective system by proposing the state hire more caseworkers.

Democratic Gov. Janet Mills, in her proposed two-year budget, is heeding advice from an auditor of the state’s child protective system by proposing the state hire more caseworkers.

The budget amendments, announced on Tuesday, add $2.8 million to the $8 billion budget proposal, in money to hire 62 new staff in the Office of Child and Family Services — 43 caseworkers, six background check unit staff and 13 positions in intake, which handles calls and reports of suspected abuse or neglect.

If the Legislature approves Mills’ latest proposal, it’ll represent an 8 percent hike across the board in OCFS staff — a total staff growth of nearly 30 percent in less than a year. The governor’s office earlier this week referred to these additions as a “critical down payment to reduce caseloads.”

Last week, caseworkers spoke on the condition of anonymity to the Bangor Daily News to say that their workloads, unmanageable since at least last year, have remained unmanageable or intensified since February, when many of the issues were first publicly identified.

Upping the number of department caseworkers is one of the most important endeavors the department can take at this point, Child Welfare Ombudsman Christine Alberi said, because it’ll give current and future caseworkers what they need: time. “They need time to be trained and time to do their jobs,” she said.

The administration sees adding staff as a key component of enacting recommended and mandated reforms to Maine’s beleaguered child welfare system. The aggressive approach by Mills and DHHS Commissioner Jeanne Lambrew is part of the systemic call for reforms in the wake of two public deaths of children from abuse, along with the deaths of more than 20 other children after the state received concerns about abuse or neglect involving their families. The state hired Public Consulting Group in September to comprehensively evaluate it’s child welfare system.

Since releasing its initial findings in February, the department has begun working closely with PCG to revamp its practices, including evaluating children’s behavioral health services for the first time in more than 20 years, opening lines of communication between stakeholders and departments by re-establishing the Children’s Cabinet, proposing legislation to reassess and diminish caseload sizes, updating the technology and organization of the department’s intake system, and including regular input from all ranks of staff about best practices.

Per PCG’s recommendation, the department has also begun reassessing its use of Alternative Response Programs, which are private child welfare agencies contracted by the state to handle what are deemed as less severe child welfare cases. That determination is often made by an employee in intake, when a report of suspected abuse or neglect is made. If a case doesn’t rise to the level of severity to have a DHHS caseworker step in, a volunteer caseworker with an ARP will take over. Since the death of 10-year-old Marissa Kennedy last March in Stockton Springs allegedly at the hands of her mother and stepfather — who had contact with caseworkers prior to Kennedy’s death — the state has ended its contract with the ARP in that area, Home Counselors, Inc.

It’s unclear at this point how many caseworkers the department aims to hire in order to effectively offset the workload burden on current employees, Farwell and Mills’ spokesman Scott Ogden said, but that assessment is “preliminary and ongoing.”

It’s Franco-American Day at the State House with some high-profile votes expected amid the pompe et circonstance. The House of Representatives and Senate will hold bilingual sessions on Thursday, which is Franco-American Day, a regular day held by the Legislature to celebrate the state’s French heritage. Here’s your soundtrack and if you’re in Augusta, don’t miss the tourtiere that is typically offered in the Cross Cafe.

Still, there is high-profile legislative business to be done, particularly in the House, which is scheduled to vote on bills initially approved by the Senate that would mandate an emissions study of the proposed Central Maine Power corridor and have Maine join an interstate compact to award Electoral College votes based on the winner of the national popular vote.

When it happens, the corridor vote will be a crucial test of Mills’ influence over a more liberal group of House Democrats who have seemed split so far on the controversial corridor that the governor backs and show their appetite for derailing the project against her wishes.

Committees will be busy after the sessions end, with hearings scheduled on measures that include a bill from Senate Minority Leader Dana Dow, R-Waldoboro, and backed by Democratic presiding officers that would expand support for certain solar energy installations. Other panels will work on criminal justice reform and property tax relief measures. See the full schedule here.

— A bill that could thwart Central Maine Power’s $1 billion hydropower transmission line project won narrow support from a legislative committee. The bill, sponsored by Rep. Seth Berry, D-Bowdoinham, would mandate that two-thirds of municipalities bisected by the corridor — and other elective corridors like it — approve it by referendum or a vote from municipal officials. It would also issue a moratorium on such projects through the end of this year. It won a 7-5 energy committee endorsement Wednesday despite warnings from Public Advocate Barry Hobbins that it would “kill the project.” The Massachusetts attorney general has also said there is no guarantee under a pending contract that Hydro-Quebec wouldn’t substitute higher-emission power sources to fulfill its terms with the regional grid.

— Attorneys and advocates say Maine’s bail system is unfair to low-income people awaiting trial. Since the 1990s, the number of people awaiting trial unable to bail out of jail has reached unprecedented heights in Maine, filling some facilities beyond their maximum capacity and increasing costs to taxpayers. Defense attorney Zachary Smith said making people pay cash to get out of jail predicates their freedom on their wealth, creating unequal paths through the justice system that are based on financial status.

— A lawyer for the father of a toddler who went missing in Waterville in 2012 will file a legal response to the child’s mother wrongful death suit against him. On Wednesday, attorney Michael Waxman, representing Justin DiPietro, told the Morning Sentinel he plans to file a response on behalf of his client soon. Trista Reynolds filed a wrongful death suit against DiPietro in December, claiming he is responsible for the death of their child, Ayla Reynolds, who was in his custody when she went missing in 2012. The child has never been found and was declared dead in 2017.

— Alabama’s governor signed the nation’s most restrictive anti-abortion law. The Associated Press reports that Republican Gov. Kay Iveysigned the law on Wednesday. The legislation Alabama senators passed Tuesday would make performing an abortion at any stage of pregnancy a felony punishable by 10 to 99 years or life in prison for the provider. The only exception would be when the woman’s health is at serious risk. Women seeking or undergoing abortions wouldn’t be punished. The bill’s Republican sponsors want to give conservatives on the U.S. Supreme Court a chance to gut abortion rights nationwide, but Democrats and abortion rights advocates criticized the bill as a slap in the face to women voters.

Many Mainers got their knickers — make that long johns — in a knot when parts of the state were sprinkled with snow on Tuesday. Flaky accumulation in mid-May is odd and depressing, but it could be worse.

It could be spiders.

A friend who spent a year in Australia — which must mean “Land of So Many Things That Want to Kill You” in some language — noted that spring snow in Maine is nothing compared to “spider season” Down Under. Based on a little research, I would have to agree.

In 2015, National Geographic described a phenomenon called “ballooning,” in which millions of spiders dropped from the sky in the Southern Tablelands region, blanketing the countryside with their webs. Click through to take a gander at that photo of rolling white hills covered in — spider webs, not snow.

“They fly through the sky and then we see these falls of spider webs that look almost as if it’s snowing,” local resident Keith Basterfield told the Goulburn Post.

I don’t mind spiders. I usually employ “catch and release” techniques when uninvited eight-legged guests start moving into our old house in late fall. As a kid, my siblings and I would venture into our rock-walled cellar to catch them to feed to our pet lizards.

But I would not want to shovel them. If the bucket is going to be filled with spiders, cross “visiting Australia” off my bucket list. Here is your soundtrack. — Robert Long

A weak disturbance will drop down from the northwest tonight triggering some snow showers across Fort Kent and vicinity as it moves through with no significant accumulation expected.
Our Sponsors END_OF_DOCUMENT_TOKEN_TO_BE_REPLACED