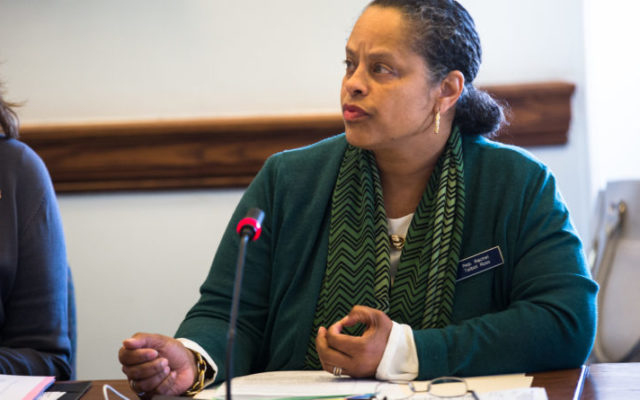 By Susan Sharon, Maine Public • May 14, 2019
Maine’s federally recognized Indian tribes are seeking to restore their ability to prosecute non-Indians in domestic violence and certain other crimes committed on tribal land.

Maine’s federally recognized Indian tribes are seeking to restore their ability to prosecute non-Indians in domestic violence and certain other crimes committed on tribal land.

The Legislature’s Judiciary Committee heard testimony on Monday on a bill that would put the Penobscot Nation and Passamaquoddy Tribe on par with other tribes around the country who had that right restored in 2013.

Members of the Penobscot Nation and others say it’s a problem that retraumatizes victims and eludes justice: According to the U.S. Department of Justice, more than 80 percent of all sexual assault cases and 60 percent of physical assaults against native women are committed by non-natives. But around the country, only a small percentage of them are ever heard in court.

“Sixty-seven percent of the sexual abuse cases reported in Indian Country are declined for prosecution. It’s not the tribes who decline to prosecute, it’s the state and federal law enforcement agencies that refuse to prosecute,” says Rep. Rachel Talbot Ross of Portland, the chief sponsor of a bill to address a 1978 U.S. Supreme Court ruling that curtailed tribal sovereignty to handle such cases.

The case, Oliphant v. Suquamish Tribe, did provide that Congress could restore sovereignty. And in 2010 and 2013 it did, with the Tribal Law and Order Act and the Violence Against Women Reauthorization Act, or VAWA.

“Because of the interpretations of the federal Maine Indian Land Claims Settlement and State Implementing Acts of 1980, the tribal nations of Maine have been excluded from the provisions of the federal Violence Against Women Act. The Wabanaki nations of Maine are federally recognized tribes and, in theory, should be able to operate under federal legislation as sovereigns,” she says.

It’s no secret, Dana says, that Maine’s Land Claims Settlement Act, which extinguished certain tribal rights, has become a setback for tribal nations because of dueling interpretations over what the Act allows. As an example, Tribal Council member Jennifer Galipeau, who works as a victim advocate for the Penobscot Nation, says she repeatedly hears from clients who don’t report domestic violence because they don’t think it will do any good.

“There has to be a better way, because the system is failing due to jurisdictional confusion, untrained responders and state court systems that are overwhelmed with cases that we could be prosecuting in our own communities,” she says.

In the four years that she has worked as a victim advocate, Galipeau she has yet to see a single domestic violence case that has been reported to the state go to trial.

No one testified against the bill, which is similar to one rejected by lawmakers in 2015. Back then, former Attorney General Janet Mills opposed it out of concern that it encroached on state sovereignty.

However, a Mills spokesperson says the governor recently wrote to members of Congress to express support for a new provision, authored by U.S. Rep. Chellie Pingree of Maine’s 1st District, that would put Maine’s tribes on equal footing with those in other states.

Mills has not said whether she would support the new bill. But Penobscot Nation Tribal Judge Eric Mehnert says the argument that it could infringe on state sovereignty is without merit.

“The Maine Settlement Act provides that if a federal law is passed which affects or preempts state law, that Act shall not apply in Maine. However VAWA does not preempt Maine law,” he says.

It specifically states that “nothing in the Act creates or eliminates any federal or state jurisdiction over Indian Country or affects the authority of the United States or any state government to investigate or prosecute a criminal violation in Indian Country.”

See More
A Mills spokesperson says the governor looks forward to working with the Maine Legislature, the attorney general’s office and others to implement specific changes to Maine statutes that would protect tribal members in domestic violence cases.

If you or someone you know is experiencing domestic violence and would like to talk with an advocate, call 866-834-4357, TRS 800-787-3224. This free, confidential service is available 24/7 and is accessible from anywhere in Maine.

As the Maine Turnpike expects 1 million travelers alone over the Labor Day weekend, policymakers are gearing up for a sprint to solve one of the state’s most intractable problems: a long-standing — and growing — transportation funding gap.
Apex Weather END_OF_DOCUMENT_TOKEN_TO_BE_REPLACED

The Valley will receive an inch or less of accumulation from Thursday's system based on current forecast model data.
Our Sponsors END_OF_DOCUMENT_TOKEN_TO_BE_REPLACED