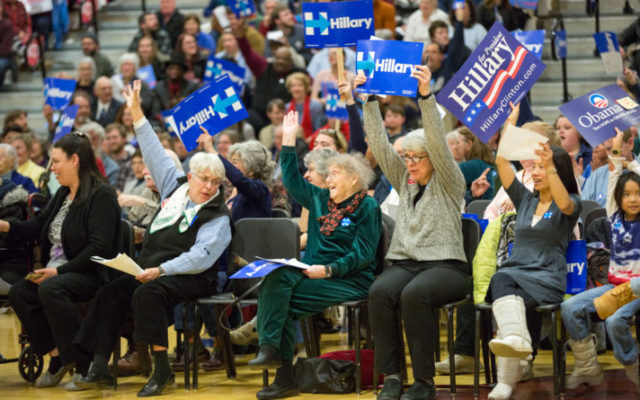 Michael Shepherd, BDN Staff • May 13, 2019
Democrats on a legislative committee endorsed a bill Friday that would have Maine switch from nominating caucuses to a state-run primary for the 2020 presidential election in a national transition away from the few remaining caucuses.

AUGUSTA, Maine — Democrats on a legislative committee endorsed a bill Friday that would have Maine switch from nominating caucuses to a state-run primary for the 2020 presidential election in a national transition away from the few remaining caucuses.

Maine had presidential primaries in 1996 and 2000. In the latter election, more than 2 1/2 times as many voters turned out as the 15 percent of Democrats and 7 percent of Republicans who voted at the party-run caucuses during the 2016 open-seat presidential election.

Those caucuses were messy. The Democratic ones were held at the municipal level and were swamped with voters. Republicans held regional caucuses that were harder for many to attend. After that, legislative leaders from both parties and former Gov. Paul LePage enacted legislation aimed at shifting to a primary.
That shift will require legislative action in 2019. A bill from Secretary of State Matt Dunlap that would slate Maine’s primaries for March 3, 2020 — or Super Tuesday, a date used by 13 states — faced opposition from minority Republicans on the Legislature’s voting committee Friday.

That is important because the Legislature’s fiscal office estimates that a primary shift would cost the state $122,000 in ballot printing and postage costs that will have to be funded during bipartisan negotiations around a two-year budget due in June. That budget requires two-thirds support in both legislative chambers. Municipalities would foot an estimated $857,000 more.

Sen. Louis Luchini, D-Ellsworth, who co-chairs the voting panel, said on Friday he was “surprised to see it fall on party lines,” noting past bipartisan support. Democrats’ need for a primary is more urgent, with 21 major candidates running for their nomination to take on President Donald Trump, a Republican who likely won’t face a serious primary challenge.

“In both cases, people chose not to vote because it was so inconvenient,” Luchini said of the 2016 caucuses.

Rep. Scott Strom of Pittsfield, the lead Republican on the committee, said he has heard dueling concerns from his party. Activists have told him they want caucuses because they’re easier to control, while lawmakers have largely cited the cost to taxpayers for another election.

Maine’s two major parties haven’t taken formal stances on the change, but Katie Mae Simpson, a spokeswoman for the Maine Democratic Party, said a primary has “broad support among Democrats.” Jason Savage, the executive director of the Maine Republican Party, said he was “skeptical” of what Democrats are “trying to accomplish, the reasons and the cost.”

Maine was among 10 states that held nominating caucuses in 2016, where Republicans backed U.S. Sen. Ted Cruz of Texas and Democrats picked Sen. Bernie Sanders of Vermont, who ended being the runners-up for the nominations. Six of those states have already switched to primaries, and other caucus states could, according to The New York Times.

Mostly cloudy skies are expected across Fort Kent today. Clouds will thicken this afternoon as an area of low pressure quickly moves east from the Great Lakes and crosses Maine tonight then heads into the Maritimes Thursday morning.
Our Sponsors END_OF_DOCUMENT_TOKEN_TO_BE_REPLACED