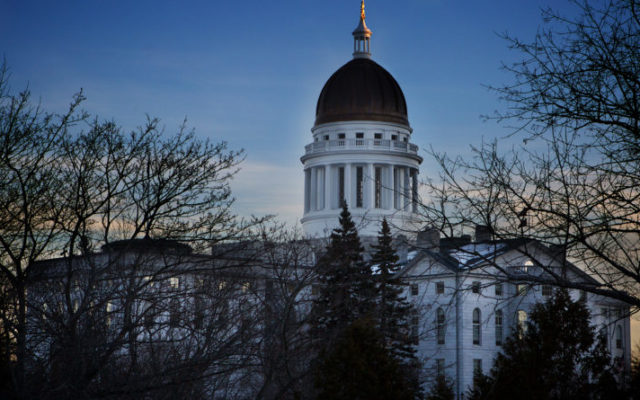 More people are struggling with high drug prices. So Maine and other states are taking action.

Michael Ollove, Stateline • May 7, 2019
For “big pharma,” a lion’s den might seem more hospitable than the Maine Legislature this year.

For “big pharma,” a lion’s den might seem more hospitable than the Maine Legislature this year.

The animus begins at the top, in the office of Senate President Troy Jackson, a fifth-generation logger from Aroostook County on the Canadian border. Jackson isn’t shy about much, and that includes his feelings about drug companies and the prices they charge his Maine constituents.

Drugmakers have been gouging “people since Christ,” Jackson, a Democrat, said — using a more colorful verb — during an interview last month. He openly refers to the drug industry as “the anti-Christ.”

Jackson’s language is lively, but many in both political parties, at both the state and the federal level, share his sentiments. From President Donald Trump on down, there is increasing frustration that Americans pay more for prescription drugs than people do in other countries, where prescription drugs often are subject to government price controls.

Tiffany Haverly, director of public affairs for the Pharmaceutical Research and Manufacturers of America, said in an email to Stateline that “it’s too bad that Sen. Jackson would say such a thing about the millions of people across the country, including more than 24,000 Mainers, whose jobs are supported by biopharmaceutical companies, and the patients and families whose lives have been impacted by the work these people do.”

“Their stories are more powerful than his rhetoric.”

But many of Jackson’s Maine colleagues have joined him in supporting a package of bills designed to curb drug prices. Some of the bills have Republican as well as Democratic sponsors. Other Republicans, however, remain skeptical.

A February poll from the Kaiser Family Foundation found that 63 percent of U.S. adults — including 53 percent of Republicans and 72 percent of Democrats — think there isn’t as much regulation as there should be of drug industry prices.

Though many other states besides Maine are taking targeted actions, few if any are seeking to tackle the issue in such a comprehensive way.

State Sen. Heather Sanborn, chairwoman of a joint legislative committee working on the bills and author of one of them, said bundling the measures will make it harder for opponents to pick them off one by one.

Another reason for combining them, said Sanborn, a Democrat, is to blunt the drug industry’s common complaint that legislators tinkering with only part of the drug supply chain will inadvertently make the situation worse.

“We want to find every lever we have available to us as a state,” Sanborn said. “If you pull on just one lever, you may have unintended consequences.”

One measure would establish a board that could cap drug prices for health plans in Maine. Another would require pharmacy benefit managers, the companies that negotiate with drug manufacturers on behalf of government health plans and private and employer-based insurance plans, to pass on all savings to consumers.

Montana lawmakers recently approved a similar bill, which is awaiting the governor’s signature.

Jackson and his allies also want to allow the importation of prescription drugs from overseas. Vermont last year became the first state to adopt that measure, which requires federal approval, and Colorado, Florida and Illinois may follow suit.

Haverly’s colleague Priscilla VanderVeer, deputy vice president for public affairs at the Pharmaceutical Research and Manufacturers of America, said in an interview with Stateline that state legislators are “simply trying to make political points with weak legislative tools” that won’t help patients afford their medicines.

She said lawmakers in Maine and elsewhere are pursuing a strategy she describes as, “We’re going to throw all of this on the wall. We don’t know if it’s going to stick, but we want pharma to suffer.”

Taken together, the measures that Maine and other states are pursuing represent an increasingly assertive approach into regulatory territory that they used to be content to leave to the federal government.

“Congress and the president aren’t doing anything for whatever reason, so the states are stepping in,” Jackson said. “What else are we going to do? I’m just tired of telling people I can’t help them.”

Jackson’s constituents aren’t the only ones who are struggling with high drug prices. Like all states, Maine itself is a major purchaser of prescription drugs — for its public employee health plans, its Medicaid program and prison inmates. MaineCare, the state’s Medicaid program, said its spending on prescription drugs increased by more than 7 percent between 2016 and 2018.

“Unlike the federal government, states have to balance their budgets,” said Trish Riley, executive director of the National Academy for State Health Policy, which has advised legislators in Maine and many other states on prescription drug policy. “They have every reason to be involved on this issue.”

According to a Kaiser Family Foundation survey earlier this year, about 1 in 4 Americans say they have difficulty affording their prescription drugs. For those who consider themselves in fair or poor health, the percentage jumps up to nearly 50 percent.

Christina Raymond, 39, is one of those people. Last month, she traveled to Augusta from her home on the Canadian border to ask legislators to help keep her alive.

Having learned at age 36 that she had breast cancer, Raymond began chemotherapy three years ago. To protect her immune system during treatment, her doctor prescribed injections of the drug Neulasta every couple of weeks during March and April 2016.

Each dose cost $6,000. Raymond is on Medicare because of a disability, but the program only covered 80 percent of her costs, leaving her with a bill of $4,800. That was more than she and her husband, who works at a job-training center, could afford on their $30,000 a year income.

Luckily, a woman at the Cary Medical Center in Caribou, where Raymond received treatment, connected her to a charity that offered to foot half her bill.

Not so luckily, Raymond needs to take other medications for her cancer and for lupus, which means hundreds of dollars of out-of-pocket medical expenses. “I’ve had to refinance my car, refinance my house,” she said in a telephone interview. “We went through my husband’s 401(k) and I’m in the process of filing for bankruptcy now. And I still have to be on these medicines for two more years.”

She paused before summing up. “These medicines aren’t a luxury for me. They’re lifesaving. If I can’t afford them, it’s the difference between life and death.”

Drugmakers and pharmacy benefit managers often paint the other as the villain in the drug chain.

The bills are a Democratic package, but certain measures have attracted some Republican sponsors, including state Sen. Robert Foley. Like other Republicans, Foley sounds a bit more cautious than his Democratic colleagues.

“I’m very concerned and want to try to achieve the goals of the bills to reduce costs,” he said during a break from a committee work session last week. “But we want to make sure we don’t impact the availability of drugs or the development of new drugs.”

Other Republicans sounded wary of the package of bills. “This is probably the most complicated issue we’ll deal with here,” state Rep. Gregory Swallow said. “It’s a delicate balance, and you don’t want to discourage product development.”

Last year, the Legislature directed the Maine Health Data Organization to publish lists of the 25 most expensive drugs sold in the state, the 25 most prescribed medicines and the 25 medicines that had experienced the greatest price increase in a year.

Building on that legislation, one of the bills in this year’s package would require manufacturers of those drugs to disclose how they set the price, and to detail costs associated with research and development, production, wholesale acquisition, advertising and marketing, and payments to pharmacies or direct purchasers.

“We want to know why these steep increases are happening,” said Sen. Eloise Vitelli, a Democrat and the bill’s Senate sponsor.

Jackson has authored a bill that would add an enforcement mechanism, creating a board to determine whether a drug’s price is affordable to Maine and its residents. If not, the board could set a price for the medicine, beyond which no state program, commercial health plan, wholesaler or pharmacy would be required to pay.

Maryland last month became the first legislature to approve a prescription drug affordability board, a first step toward giving the state authority to put a ceiling on drug prices. The bill is awaiting the governor’s signature.

Sanborn’s bill is aimed at pharmacy benefit managers using a strategy Montana devised. States have limited authority to regulate them, but they do regulate health plans operating in their states. Following Montana’s tactic, Sanborn’s bill would use that authority to require health plans to force their pharmacy benefit managers to pass on any savings to consumers.

Sanborn argues that “in the current system, we have misaligned financial incentives” because pharmacy benefit managers that extract lower prices from manufacturers get lower rebates from them.

The Pharmaceutical Care Management Association, which represents pharmacy benefit managers, suggested in an email that some provisions of Maine’s proposal might increase drug costs.

The final piece of the legislative package is Jackson’s bill allowing the importation of foreign drugs. That can only happen with the approval of the U.S. Health and Human Services secretary. Earlier this year, the current secretary, once opposed to such importation, established a group in his agency to explore the possibility.

The pharmaceutical industry says price controls could result in some medicines becoming unavailable, if the manufacturer isn’t willing to sell the drug at the reduced price, and less investment in research and development. Drugmakers also argue that importing drugs from overseas would endanger Americans by exposing them to inferior safety practices.

One advantage that the sponsors of the bill say they have living in Maine is the state’s Clean Election Act, which provides public financing to candidates who forgo most kinds of private campaign donations. According to FollowtheMoney.org, a nonpartisan organization that collects campaign finance data, while the pharmaceutical industry contributed $9.7 million to state legislative races in 2018, in Maine it contributed a paltry $7,400.

Drug company lobbyists were visible during legislative hearings in Augusta last month. But others had their say too: Hordes of red-shirted activists from the Maine chapter of the AARP, which has made prescription drugs its top legislative issue in Augusta this year, visited the capital to talk with lawmakers as well.

“We believe the public has spoken, and leaders should listen to them,” said Lori Parham, AARP Maine’s state director.

Mostly cloudy skies are expected across Fort Kent today. Clouds will thicken this afternoon as an area of low pressure quickly moves east from the Great Lakes and crosses Maine tonight then heads into the Maritimes Thursday morning.
Our Sponsors END_OF_DOCUMENT_TOKEN_TO_BE_REPLACED