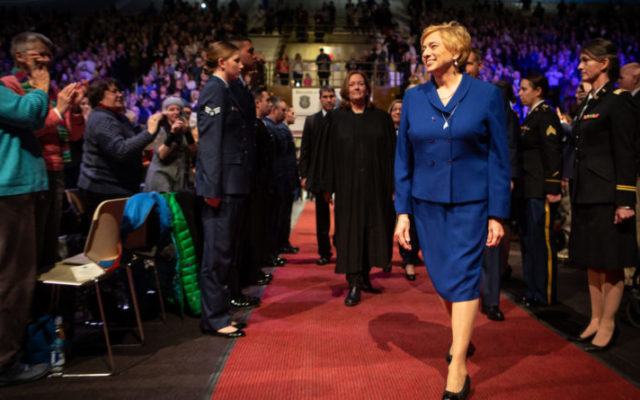 Michael Shepherd, BDN Staff • May 7, 2019
The committee tasked with paying for Gov. Janet Mills’ January inaugural festivities still needs to raise just more than $67,000 to settle most of its tab from the Augusta Civic Center. Settling that debt may have to wait until early summer.

The committee tasked with paying for Gov. Janet Mills’ January inaugural festivities still needs to raise just more than $67,000 to settle most of its tab from the Augusta Civic Center. Settling that debt may have to wait until early summer.

The Democratic governor held her inaugural ceremony and ball at the city-owned convention center, which is still owed $120,000. It’s still outstanding for a few main reasons. Chief among them now is an inability to raise money from certain sources during the legislative session.

Maine’s ethics regulator is allowing the transition to bypass deadlines in a law to settle the bill, but lobbyists and their employers can’t donate right now. Before Mills was elected, we didn’t know much about the funding of governors’ largely unregulated transitions to office. They were finally regulated under a 2015 campaign finance law passed by referendum. It established reporting requirements while still allowing governors-elect to take unlimited amounts of money from individual and corporate sources.

The Democratic governor raised more than $400,000 for both her inaugural and transition funds, the latter of which whittled down staffing picks and readied her government. Most of it came from corporate donors, including marijuana, financial, casino, lobbying, paper and energy interests. Several of those donors also gave to former Gov. Paul LePage’s 2010 transition, which voluntarily disclosed donors but not amounts.

Mills’ transition has said that the $195,000 bill from the Augusta Civic Center was higher than expected, though the city has said it’s typical for bills to change based on last-minute changes to menu options or attendee counts. The inaugural fund has paid only about 40 percent of the bill and had nearly $53,000 on hand on May 1.

The staff of the Maine Ethics Commission, which is tasked with enforcing the disclosure provisions, has found that the 2015 law’s provision that keeps committees from accepting donations past Jan. 31 “is not workable because it is too early,” said Jonathan Wayne, the commission’s executive director.

It has allowed Mills to keep raising money, but her inaugural committee only took in $2,545 from mid-February to May 1. Why? It’s probably because lobbyists and their employers are barred from donating to legislators and transition funds during legislative sessions.

A Mills spokesman said the committee will ‘work vigorously’ to pay off the debt in the coming months. That ban on lobbyist-related funding means that the money that Mills needs should flow in relatively easily by July, when the legislative session is likely to be over. Mills got several five-figure donations already and the ethics commission will get an update from staff on Mills’ activities at their June meeting.

Mills spokesman Scott Ogden said on Friday that the committee “has made progress in resolving the debt,” will use money on hand to further reduce the amount owed and “will work vigorously to continue to pay off the debt in the coming months.”

Roughly half of legislative committees are meeting today, and those dockets are heavy with protection bills. That includes proposals to better protect pregnant workers and to improve workers’ compensation benefits, protect domestic violence victims, and provide better early intervention for at-risk families and children, and those with mental health disorders.

The education committee is scheduled to vote on a proposal from Rep. Victoria Kornfield, D-Bangor, to create a universal pre-kindergarten program in Maine, as well as two bills from Rep. Dick Farnsworth, D-Portland, and Sen. Rebecca Millett, D-Cape Elizabeth, that require the state to fund at least half of public pre-school costs. Listen here.

Bills regulating retail marijuana and sports wagering could be voted on by the Veterans and Legal Affairs Committee, and the State and Local Government Committee could vote on a bundle of bills that would increase the annual salary for legislators and the governor. Find the full legislative schedule here.

— A lengthy fight over the fate of a Washington County prison appears about to end. On Friday, Mills announced that she and Down East legislators had reached agreement on a plan to build a pre-release center on the site of the shuttered Downeast Correctional Facility. The Democratic governor’s office said the facility would house up to 50 minimum-security prisoners and employ 15 people. It would cost between $6.5 million and $8 million in funds authorized in a 2016 bond. The high cost of operating the prison had spurred Mills’ predecessors to try to close it, which engendered strong local opposition. LePage rushed to close it in February 2018 and later lost a lawsuit that forced him to reopen it temporarily with minimal staffing and inmates through that June. Two bills to reopen the prison had been introduced, but the deal announced Friday appears to make them moot.

— Federal environmental regulators want Central Maine Power to keep looking for ways to mitigate the environmental impact of a proposed $1 billion hydropower transmission line. In an April 25 letterto the U.S. Army Corps of Engineers, the EPA said it did not have time to read all of the details of the proposed New England Clean Energy Connect project and its environmental impact. It has asked for more information and a detailed analysis of location alternatives to Central Maine Power’s proposed hydropower corridor through western Maine that would have less impact on aquatic ecosystems. The project, which received a key permit from the Maine Public Utilities Commission on April 11, still needs permits and approvals from the Maine Department of Environmental Protection, the Maine Land Use Planning Commission, the Army Corps and other regulators.

— A mother accused of taking part in abuse that caused the death of her 10-year-old daughter testified that she admitted guilt because she feared her husband. On Friday, Sharon Carrillo took the stand at a hearing on her defense’s efforts to exclude statements she made to investigators as evidence in her trial. She and her husband, Julio Carrillo, are accused of depraved indifference murder in the February 2018 death of her daughter, Marissa Kennedy. “I was scared that he would hurt me, that Julio would hurt me if I didn’t take 50 percent blame,” she said from the witness stand Friday. After hearing two days of testimony, Superior Court Justice Robert Murray will rule on the motion to suppress.

— It’s still really hard to be a farmer in Maine. The state has experienced a bit of an agricultural renaissance in recent years, creating both hope for the economy and a magnet that is drawing some young people back to the land. But the most recent federal census of agriculture in Maine shows that it’s still a grind. Key points of concern include the loss of about 10 percent of Maine farmland between 2012 and 2017, a loss of 573 farms in the five-year span, and a 15.8 percent decline in average net income per farm, from $20,141 in 2012 to $16,958 in 2017.

Not long after we started Daily Brief in early 2015, it became clear that readers needed a little verbal dessert or some other way to sweeten their morning after we had served them mouthfuls of sometimes sour political content. That’s how these final words — which we call “the kicker” — were born. They aim to remind us of our humanity in an unrelentingly dehumanizing political environment.

It’s often a struggle to come up with something to fill that need. That’s why you’ve read so much about my childhood foibles in recent months. Desperation triggers the memory, I guess.

For a while, “the best of Maine Craigslist” bailed us out, providing twice or thrice weekly reminders of our shared humanity in ways that allowed us to chuckle together. But then Craigslist got a bit too weird. After Craigslist, the default option of last resort was www.holidayscalendar.com, which could help us inform you that you should be celebrating National Grilled Cheese Sandwich Day or some other grand occasion.

But we rarely had to stoop to “Celebrate Something Day” because Chris Cousins’ kids almost always came to the rescue. We would be scrounging with increasing desperation for a kicker topic when he would chime in with, “My kids just did something I could write about.”

Ten minutes later, we would have the best, most humane piece of writing to appear that day on the BDN website.

For three years, we got to grow up with Chris’ sons vicariously, aided by a master storyteller who was also their enormously proud father. He wasn’t just proud of them because they were his kids. As anyone who read about their exploits could quickly discern, his pride derived from the fact that they were becoming dynamic, compassionate human beings right before our eyes.

I can report that things haven’t changed since Chris’ tragic death last August. His older son just helped produce this powerful video to welcome students to middle school. After three months of rehearsals, his 8-year-old son on Sunday wrapped up a successful run as the jailer in a youth theater production of “Wind in the Willows.”

The medium might have changed, but the fact that they are stars has not. Here is your soundtrack. — Robert Long

A warm front will approach the Valley today and cross the region this evening.
Campaign Corner END_OF_DOCUMENT_TOKEN_TO_BE_REPLACED

Dale Crafts filed his nomination papers for Feb. 21 with the Secretary of State to officially be placed on the primary ballot on June 9, 2020, for the U.S. House of Representatives 2nd District race.
Our Sponsors END_OF_DOCUMENT_TOKEN_TO_BE_REPLACED