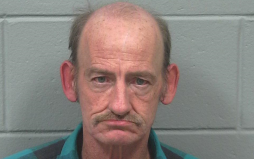 Police arrested Ingalls on Valentine’s Day, two days after he allegedly robbed the credit union on Church Street in Patten shortly before 2:40 p.m. He demanded money from a teller in a note written with “a kid’s marker,” according to police.

He made off with $5,458, according to the affidavit filed at the Penobscot Judicial Center in Bangor.

Ingalls allegedly used $500 to repay a $370 debt and told the man from whom he’d borrowed the money that he could “keep the extra,” the court document said.

Detectives told Ingalls during their interview that police believed he had robbed the bank and that he should “help himself out by telling them where the rest of the money was.” Ingalls denied robbing the bank, got angry, and requested a lawyer.

While he was being booked at the Penobscot County Jail, corrections officers found a wad of cash in one of Ingalls’ socks and a $20 bill in his long johns, according to the affidavit.

Ingalls, who has a long criminal history, is next due in court on June 10.

If convicted, he faces up to 10 years in prison and a fine of up to $10,000. He also could be ordered to pay restitution.

The upper-level low pressure area that has been parked over southern New England will continue to stall there today into the overnight period then begin to open up and shift southeast into the Atlantic Thursday.
Campaign Corner END_OF_DOCUMENT_TOKEN_TO_BE_REPLACED

Dale Crafts filed his nomination papers for Feb. 21 with the Secretary of State to officially be placed on the primary ballot on June 9, 2020, for the U.S. House of Representatives 2nd District race.
Our Sponsors END_OF_DOCUMENT_TOKEN_TO_BE_REPLACED