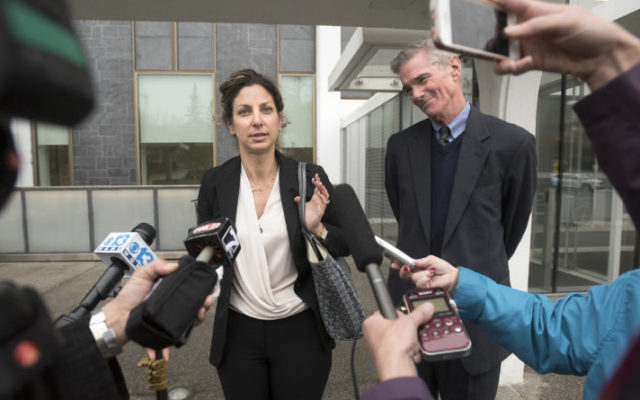 Judy Harrison, BDN Staff • April 24, 2019
A federal judge Wednesday did not say how he would rule on a challenge to Trump administration regulations that would limit what federally funded health care providers can tell patients about accessing abortion services.

A federal judge Wednesday did not say how he would rule on a challenge to Trump administration regulations that would limit what federally funded health care providers can tell patients about accessing abortion services. But during a hearing on the challenge in federal court in Bangor, U.S. District Judge Lance Walker said he would decide soon.

Attorneys for Maine Family Planning, the state’s only direct recipient of the federal Title X funds, are seeking an injunction that would block the rule from taking effect as scheduled on May 3. The hearing before Walker came the morning after a federal judge in Oregon considering a separate but similar legal challenge against the rule said he would grant a preliminary injunction blocking it.

Walker on Wednesday questioned attorneys on both sides during the more than two-hour hearing.

Many of his questions focused on whether the rule that requires separate facilities for reproductive health care services and abortion services would force clinics that receive Title X funds to close, which would force patients to travel more than 100 miles to access those services.

Attorneys for Maine Family Planning said it has presented ample evidence that the rule, if implemented, would place an undue burden on its clients and deny access to health care for thousands of Maine women.

Department of Justice attorneys countered that the rule is about how federal funds are used, not about limiting access to abortion or reproductive health care. The U.S. Department of Health and Human Services expects that other providers would step in to fill the gap or Maine Family Planning would find funding elsewhere.

Maine Family Planning in March sued the U.S. Department of Health and Human Services in U.S. District Court in Bangor.

It is one of a handful of legal actions pending in federal courts around the country seeking to keep what opponents have called a “gag rule” from going into effect, according to George Hill, president and CEO of Maine Family Planning.

The Trump administration rule would prevent doctors and nurses at facilities that receive federal funding from discussing abortion with pregnant patients or referring them to abortion providers even if they ask questions about abortion services, according to the complaint.

The plan also would require that abortion services be separated physically from other reproductive health care services — a provision referred to as the “separation” rule.

Title X recipients that violated the rule could lose their federal funds.

In Oregon on Tuesday, U.S. District Judge Michael J. McShane said he would grant an injunction in a similar legal challenge to the restrictions.

Oregon joined with 19 other states, Washington, D.C., Planned Parenthood affiliates and the American Medical Association to file the legal challenge in U.S. District Court in Oregon.

McShane also announced that he will issue a preliminary injunction to block the “separation” rule.

Three similar challenges are pending in federal courts around the country.

If Walker or other federal judges in other jurisdictions refuse to issue injunctions, the U.S. Supreme Court most likely would have to settle the issue.

The U.S. Senate unanimously confirmed Walker in October after President Donald Trump nominated him to the federal bench in April 2018.

In December, Walker rejected a challenge to the constitutionality of ranked-choice voting launched by former U.S. Rep. Bruce Poliquin following his loss to Democrat Jared Golden.

Correction: A previous version of this story misidentified Emily Nestler in a photo caption.

As the Maine Turnpike expects 1 million travelers alone over the Labor Day weekend, policymakers are gearing up for a sprint to solve one of the state’s most intractable problems: a long-standing — and growing — transportation funding gap.
Apex Weather END_OF_DOCUMENT_TOKEN_TO_BE_REPLACED

A cold front moved through the Valley early this morning, and it will be followed by an Arctic cold front this afternoon.
Campaign Corner END_OF_DOCUMENT_TOKEN_TO_BE_REPLACED