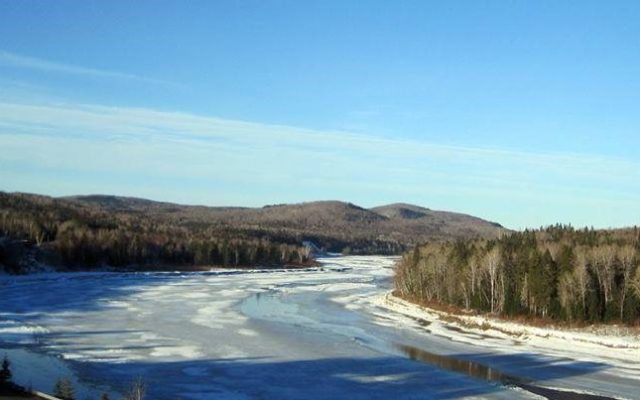 Jen Lynds & Jessica Potila, Special to the Fiddlehead Focus • April 17, 2019
The Maine Department of Transportation closed part of U.S. Route 2 in Island Falls due to flooding Wednesday, as forecasters at the National Weather Service in Caribou issued a flood watch for parts of Aroostook County.

CARIBOU, Maine — The Maine Department of Transportation closed part of U.S. Route 2 in Island Falls due to flooding Wednesday, as forecasters at the National Weather Service in Caribou issued a flood watch for parts of Aroostook County.

The Island Falls Emergency Management Agency closed Route 1 in Island Falls at the Dyer Brook bridge due to flooding caused by ice, according to a written statement. Officials continued to work on the situation Wednesday morning.

Tony Mignone, meteorologist at the National Weather Service in Caribou, said Wednesday that a flood watch is in effect for northern Maine, extending from Presque Isle to the St. John Valley and its border with Canada.

“We are watching the situation up there,” he said. “The ice is moving on the St. John River and there seems to be a bit of a jam. There is no serious flooding yet.”

He said that forecasters also are keeping an eye on areas around Washburn, as the Aroostook River has risen considerably over the last few days.

The St. John River at Nine Mile Bridge also is an area of concern, registering at 18.78 feet as of 9 a.m., where the flood stage is 15 feet.

That area is deep in the North Woods, however, and not affecting the community of Allagash. Allagash first selectman Nola Begin said Wednesday morning that she has no current concerns about flooding in town, and that there are no ice jams of major significance at this time.

“Everything is good in the Allagash,” Begin said.

About 30 miles downriver in Fort Kent, water levels have dropped slightly over the past few days.

The Fort Kent Police Department is tracking St. John River levels hourly in town where it measured 14.25 feet on Monday morning, still well under flood level which is 22.5 feet. By Wednesday at 10:30 a.m., the St. John had gone down, measuring in at just over 13 feet, according to Police Chief Tom Pelletier.

“We don’t anticipate an increase in the water levels in the very near future,” Pelletier said Wednesday morning. “The ice is moving smoothly at this point; I think we’re doing well.”

The chief added that the town continues to monitor the situation closely, and he planned to look over the area from above in a Maine Forest Service helicopter on Wednesday afternoon.

As a precaution, municipal officials were offering free sandbags to residents and businesses located on East and West Main streets that are most at risk should flooding occur.

Katahdin Trust Bank and the Town of Fort Kent Public Works Department purchased the sandbags which are being distributed free of charge. Residents or business owners can pick up 10-15 sandbags from the town office.

There also is a sandpile in place at the Fort Kent SnoRiders storage garage for people to fill bags. Sand from that pile is offered on a first come, first served basis.

Mignone said that there is more rain in the forecast for Thursday afternoon into Thursday evening.

“We could see around half an inch up in northern Aroostook,” he said.

Temperatures also are expected to rise over the next few days.

“A lot of snow will be melting,” he said. “Temperatures will be near 60 degrees in the area. It will start to cool down on Saturday, and more rain is expected over the weekend. We will need to keep a close eye on things.”

Aroostook EMA Director Darren Woods suggested County residents check out the Aroostook County Flood Watch Facebook page, launched with the purpose of notifying folks of any floods. The page contains notifications about potential flooding emergencies and the public is also welcome to submit pictures of floods or bodies of water that are near flooding.

Fort Kent Town Manager Suzie Paradis also compiled a list of information regarding flood preparedness which she and other town employees personally distributed in March to residents and business owners on East and West Main streets. Paradis gathered the information, which is useful to all who encounter flooding, from the following websites: https://www.beprepared.com/blog/7038/floods/

If flooding is likely in the area, listen to designated radio/TV emergency alert systems for information.

Seal walls in basements with waterproofing compounds to avoid seepage.

If advised to evacuate your home, do so immediately.

If there is any possibility of a flood, move immediately to higher ground.

Turn off utilities at the main switches or valves if instructed to do so. Disconnect electrical appliances.

Secure/bring outdoor items that might float away and become a potential hazard.

Move valuable items such as equipment, furniture and papers/documents to upper floors.

Do not walk through moving water. As little as 6 inches of moving water can make you fall.

If you have to walk in water, wherever possible, walk where the water is not moving. Use a stick to check the firmness of the ground in front of you.

Do not drive into flooded areas. If floodwaters rise around your car, abandon the car and move to higher ground if you can do so safely.

Do not touch electrical equipment if you are wet or standing in water.

As the Maine Turnpike expects 1 million travelers alone over the Labor Day weekend, policymakers are gearing up for a sprint to solve one of the state’s most intractable problems: a long-standing — and growing — transportation funding gap.
Apex Weather END_OF_DOCUMENT_TOKEN_TO_BE_REPLACED

A cold front moved through the Valley early this morning, and it will be followed by an Arctic cold front this afternoon.
Campaign Corner END_OF_DOCUMENT_TOKEN_TO_BE_REPLACED