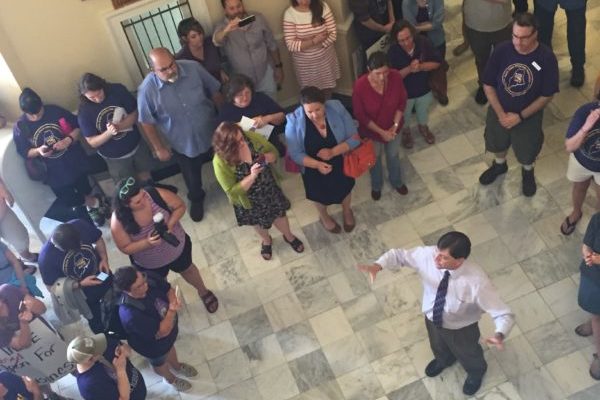 Michael Shepherd, BDN Staff • April 16, 2019
Good morning from Augusta. Bargaining between Maine’s new chief executive and the largest state employees union over a new two-year contract began in earnest at the end of February and has largely been kept confidential since then, but there are plenty of hints about what employees are seeking.

Good morning from Augusta. Bargaining between Maine’s new chief executive and the largest state employees union over a new two-year contract began in earnest at the end of February and has largely been kept confidential since then, but there are plenty of hints about what employees are seeking.

The Maine State Employees Association, which represents more than 9,000 executive branch workers, has released an open letter to Gov. Janet Mills asking for across-the-board pay raises and cost-of-living increases, an hourly wage floor of $15 and updates to the pay scale.

The union saw setbacks under Mills’ predecessor. Under Gov. Paul LePage, a Republican, the Maine State Employees Association was among two unions that accepted higher than originally offered pay raises in exchange for language that eliminated the requirement that all workers represented by a union pay fees to the union even if they weren’t members in August 2017.

About 2,000 fee-payers were lost by March 2018 after that change, which led the union to make structural changes. That language isn’t coming back under even the most labor-friendly governor, since the U.S. Supreme Court deemed those “agency fees” unconstitutional in 2018.

Under Mills, a Democrat, state government has already filled about 500 of the state positions that were left vacant by LePage, a move that helped push the state to a record surplus but left government short of the staffing levels set by the Legislature. The workforce shrank by 1,600 during his tenure and the Maine State Employees Association has complained of understaffing.

The new governor is going along with some of their legislative goals, but she likely won’t go along with all of them. Those are the conditions under which the union is looking for pay increases and retention initiatives in a new two-year contract that would begin in July. It is also pushing the Legislature to study the compensation system for state employees, which is approximately 40 years old and has often undergone piecemeal changes.

The Mills administration has supported a bill from Senate President Troy Jackson, D-Allagash, to do that with Kirsten Figueroa, the commissioner of the Maine Department of Administrative and Financial Services, saying in testimony that the system isn’t competitive with the private sector and may lack parity with local compensation and that in other states.

The administration hasn’t weighed in on other priorities of the union, including a bid to put a small group of crime analysts in a more lenient retirement plan alongside some public safety officials. More clarity on which union proposals will be most viable will come in the next few months.

It’s also worth noting that across-the-board pay raises would further stretch Mills’ two-year-budget proposal, which is already over $8 billion and spends all revenue expected to be generated during that period. As always, the union won’t get all that it wants even if the governor has changed.

Maine’s first-term congressman posted a middle-of-the-road fundraising haul in 2019’s first quarter. U.S. Rep. Jared Golden, a Democrat from the 2nd District, reported raising $261,000 in the first three month of 2019, according to filings with the Federal Election Commission that were due on Monday. More than 72 percent of that money came from individuals and 24 percent of it — or $63,500 — came from political committees and he has $260,000 left.

The latter total included $5,000 from the With Honor Fund, a bipartisan super PAC aimed at boosting military veterans that spent more than $750,000 in outside money to help Golden in his historic 2018 ranked-choice voting win against former U.S. Rep. Bruce Poliquin, a Republican.

Golden has raised $365,000 overall for his 2020 re-election bid, which is a middling haul for a freshman Democrat in a competitive district. The Washington Examiner reported last week that several other new Democrats raised upward of $500,000, but no 2020 opponents has yet emerged for Golden and he has spoken disdainfully of fundraising “call time.”

The state’s veteran congresswoman doesn’t look worried about 2020. U.S. Rep. Chellie Pingree, a Democrat from the 1st District, looks to be coasting money-wise in her safe seat, raising just $26,000 in the first quarter of 2019 — including 70 percent from individuals — with a healthy $232,000 in her coffers from previous campaigns.

Lawmakers appear set up for a busy day back from Monday’s state holiday, as most legislative committees meet today, and advance calendars in both the House and Senate are stacked with bills needing votes. Though preliminary, the Senate is likely to vote favorably on bills to direct the secretary of state’s office to come up with a bicentennial flag and to allow in-person visitation for county jail inmates, but to vote against allowing smoking in certain outdoor eating areas.

In committees this afternoon, lawmakers will consider bills to strengthen lead testing and screening, to regulate utilities and transmission line corridors, to lessen tax burdens on older Mainers, and to improve prescription drug price transparency.

The Committee on Energy, Utilities and Technology could vote on a bill from Rep. Seth Berry, D-Bowdoinham, that would make it harder for transmission line projects to use eminent domain. Berry is a known critic of the proposed 145-mile Central Maine Power corridor, and his bill would bar the Public Utilities Commission from granting permission to high-impact electric transmission line proposals without individual community approval and unless the commission can prove a project’s “significant tangible public benefits,” according to the bill language. The bill would also stall the PUC’s permitting of any new project until 2020. Listen here.

— Change has been evident but not tumultuous during the first 100 days of Maine’s new governor’s tenure. Mills said she has tried to be “cautious” during her first days in office, but the Democrat quickly enacted voter-approved Medicaid expansion, which her predecessor had blocked, and threw her support behind a controversial hydropower transmission line project that she had questioned during the 2018 campaign. Majority Democrats in the Legislature note a “lightness” in the State House while Republicans, although noting greater cordiality, criticize her $8 billion two-year spending plan as unsustainable.

— The Legislature’s oversight agency will investigate the state’s beleaguered indigent legal services program. The Government Oversight Committee voted unanimously Friday to assign the Office for Program Evaluation and Government Accountability to look into the program that matches defense attorneys with Mainers who can’t afford legal representation in criminal cases. The directive came roughly a week after a critical Sixth Amendment Center report found a general lack of oversight within the system, including excessive billing and inadequate performance on the part of its attorneys, conflicts of interest and little to no audit processes.

— Maine’s ongoing struggle to fund county jails will extend into the next legislative session. On Friday, the Criminal Justice and Public Safety Committee effectively killed six bills that aimed to fix the chronic problem. The new plan is to form a work group to come up with a fix by the time lawmakers return for the second session next January. The state’s county jail system has had trouble since at least 2006, when a failed state takeover of the system by former Gov. John Baldacci, a Democrat, led to the enactment of a law that capped what taxpayers had to pay for county jails. Today, property taxpayers cover roughly 80 percent of the approximately $90 million cost. Mills stuck with that ratio in her two-year budget, proposing to give county jails $18.4 million from the state annually.

— Regional economic travails, the high cost of medical technology and changes in the federal payments system have Maine hospitals collaborating to survive. Hospital mergers, consolidations and collaborations have been occurring for the past 20 years, but the trend has accelerated during the past five years. As they combine, some hospitals disappear and turn into clinics, while others expand their geographical reach in an effort to improve the quality of care and cut costs.

I was blessed to visit Notre Dame Cathedral in Paris last November. It was just before Advent, so in addition to the built-in grandeur, the site brimmed with holiday festivity. A full orchestra was preparing to perform in one section of the building. Living history abounded.

Today, the photos and memories from that trip contrast with the image of the fire-eaten spire toppling and sad fire cannons spraying the remains of the cathedral. I can’t add anything more poignant to the words of sadness that have poured in from around the world. The loss to shared humanity and our shared history is wrenching.

Traveling to Europe always reminds me how relatively new what we think of as American culture is. Construction on the cathedral began in 1163. It opened in 1345. It’s survived world wars, occupations, revolutions and the proliferation of outdoor urinals. In Maine, we’re getting revved up about the state’s 200th birthday. Notre Dame’s history is so rich that as Parisians celebrated its 200th birthday, Europeans hadn’t figured out what North America was, let alone how to get here.

The historical loss is daunting, as is the prospect of restoring what Monday’s fire stole. But other cathedrals have withstood bombing and fire — a testament to the medieval engineers and workers who designed and built them — so there’s hope that the cathedral can experience another renaissance. In fact, the long arm of history might be our best source of hope for Notre Dame’s future. As old as it is, the cathedral replaced an earlier church that had been built on the site. A global rebuilding effort would confirm that humans remain as resilient as our forebears were. Here is your soundtrack. — Robert Long

As the Maine Turnpike expects 1 million travelers alone over the Labor Day weekend, policymakers are gearing up for a sprint to solve one of the state’s most intractable problems: a long-standing — and growing — transportation funding gap.
Apex Weather END_OF_DOCUMENT_TOKEN_TO_BE_REPLACED

A cold front moved through the Valley early this morning, and it will be followed by an Arctic cold front this afternoon.
Campaign Corner END_OF_DOCUMENT_TOKEN_TO_BE_REPLACED