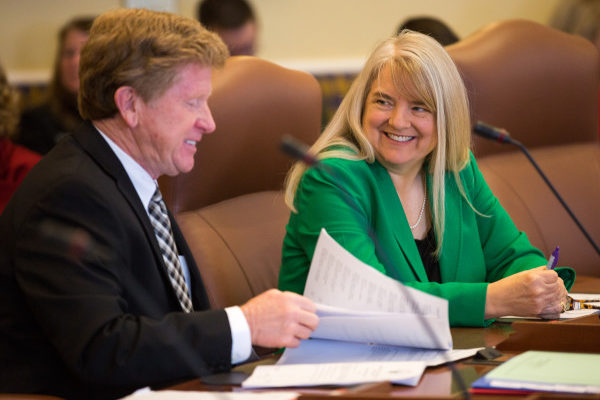 Michael Shepherd, BDN Staff • March 22, 2019
Good morning from Augusta. A so-called “red flag” bill to allow courts to order a person deemed dangerous to temporarily surrender guns is moving forward again in the Maine Legislature and could be an early flashpoint for conservatives despite a past compromise of sorts on the issue.

Good morning from Augusta. A so-called “red flag” bill to allow courts to order a person deemed dangerous to temporarily surrender guns is moving forward again in the Maine Legislature and could be an early flashpoint for conservatives despite a past compromise of sorts on the issue.

As attorney general, Gov. Janet Mills helped negotiate a 2018 compromise on a similar bill that was OKed by gun-rights groups that generally fight the concept, including the National Rifle Association and a state group that works with them, the Sportsman’s Alliance of Maine. However, it was vetoed by then-Gov. Paul LePage with help from legislative Republicans.

This year’s bill was at first more sweeping when it was rolled out recently, but the sponsor is moving it in the direction of last year’s bill. It bodes well for passage despite Mills’ reticence to more sweeping gun control measures, but it figures to face opposition from conservatives.

The environment around Maine’s red flag bill has shifted since 2018, but more sweeping gun control may not be on the horizon despite Democratic legislative control. Red flag laws have been one of the most popular policy responses to the Parkland, Florida school shooting of 2018. Nine states have passed them since then, bringing the total to 14 states, according to the Associated Press. Maine almost was among them.

Last year, former state Sen. Mark Dion, D-Portland, led a push opposed out of the gate by the NRA and other gun-rights groups. At first, it would have allowed a court to order a person to surrender guns temporarily if they were deemed a danger to themselves or another person. The Mills-backed version would have allowed orders for certain people in mental health treatment.

That assuaged gun-rights groups, but it passed largely on a party-line vote with most House Republicans opposed and LePage deemed the protections “insufficient” while vetoing it. All the while, Mills was running a gubernatorial race in which her NRA-friendly record as a legislator more than a decade ago was a major issue in the Democratic primary.

This year’s red flag bill push from Sen. Rebecca Millett, D-Cape Elizabeth, comes at a different time. Democrats long stymied by LePage want gun control — including private-sale background checks rejected by voters in 2016 — and run the Legislature. But Mills controls how far they can go and she said earlier this year “the people have already spoken” on background checks.

That has made the quickly revised red flag bill one of the likeliest gun proposals to pass in 2019. The original version of Millett’s bill was more sweeping than even the original bill from last year, including a provision that requiring a search warrant be issued after such an order if there is probable cause that the subject of the order has a gun.

David Trahan, the executive director of the Sportsman’s Alliance of Maine, called that a “non-starter.” On Thursday, Millett circulated language of a proposed amendment mirroring the Mills-backed version from last year. She said it was a mistake that the language wasn’t included from the beginning and her goal was to gain the widest possible amount of support.

Trahan said his group has seen that as the starting point all along and his group would be “fine with that.” However, some in the gun-rights grassroots — including former state Sen. Eric Brakey, R-Auburn, one of three Senate Republicans to oppose it in 2018 — have already signaled opposition.

In a Facebook video, Brakey said it would “turn due process on its head.” People like him don’t have the votes to stop it alone in the Legislature this time, but it could still be a loud fight. The larger question is if Democrats will be able to do more on guns with a cautious governor backstopping them.

Maine’s senior senator will host another Cabinet member in Maine today. U.S. Sen. Susan Collins and Housing and Urban Development Secretary Ben Carson will eat breakfast together, then tour a youth center and transitional housing program in Lewiston before holding a media availability in the afternoon.

Carson, who unsuccessfully ran for president in the 2016 Republican primary, has been one of President Donald Trump’s less controversial and long-tenured Cabinet members, although he said in January that he would step down from the post if Trump wins a second term.

Collins, who was in Florida earlier this week for a fundraiser, has yet to say whether she will seek a fifth term in 2020. But hosting Carson in Maine’s second-largest city, which has become somewhat of a bellwether for statewide elections in recent years after decades of solid Democratic support, can’t help but remind people there of her influence with the administration and ability to keep a steady flow of federal money to Maine.

The halls of the State House complex will be comparably quiet today, as only two legislative committees are scheduled to meet. The Government Oversight Committee meets at 9 a.m. and will decide whether to take further action on the recent Office of Program Evaluation and Government Accountability report that showed the state’s child welfare caseworkers to be overworked and burdened by heavy caseloads. Listen here.

Members of the Maine firefighting community are expected to gather to testify in favor of a bill from Sen. Erin Herbig, D-Belfast, before the Criminal Justice and Public Safety Committee that would provide length of service payment to eligible volunteer firefighters and emergency medical personnel. The committee will also hold public hearings on a bill from Rep. Charlotte Warren, D-Hallowell, to lower the criminal classifcation for repeatedly engaging in prostitution and a bill from Sen. Scott Cyrway, R-Benton, to increase the criminal penalty for operating or riding in a vehicle while under the influence of or possessing marijuana.

— Two people who were shot in 2017 by police have filed a civil lawsuit against the Machiasport officer who shot them. Alleging that the marine patrol officer used excessive force and violated their constitutional rights, Jason Jackson, 35, who had part of his left arm amputated after the shooting, along with 34-year-old Tiffany Smith, have filed a civil suit against Marine Patrol Officer Matthew Carter, Marine Patrol Col. Jon Cornish, Washington County Sheriff Barry Curtis and the county government. The pair was shot in Smith’s duplex in December 2017 when police visited with a warrant for Jackson’s arrest, following a reported home invasion in East Machias. Smith and Jackson are seeking unspecified monetary damages to cover “medical expenses, pain and suffering, loss of enjoyment of life and permanent impairment,” according to the suit.

— Maine Wildlife biologists have proposed increasing the coming season’s number of moose hunting permits by nearly 13 percent. If the Department of Inland Fisheries and Wildlife advisory council approves the spike, the number of permitted hunters would increase from 2,500 to 2,820 during the season later this year, which runs from September to November. The increase, which will include more antlerless permits, is to help manage moose health and “keep the herd healthy and thriving up there,” DIF&W spokesman Mark Latti said.

— The Nova Scotia government says it will cover an additional $2.5 million to renovate the idle Bar Harbor ferry terminal. The provincial Department of Transportation and Infrastructure Renewal announced on Thursday its new cost projection to renovate the facility, which will soon be used for catamaran ferry service between Maine and Nova Scotia. Prior estimates pegged the project at $5 million in Canadian money, or about $3.75 million in U.S. currency. New estimates place those figures closer to $8.5 million in Canada and $6.4 million in the U.S. The international terminal hasn’t been used in a decade, so major renovations are needed.

— Portland’s Shipyard Brewing has found a hotel partner to fulfill its “brewtel” redevelopment project. Cambria Hotels announced Thursday it will build a 102-room hotel on Newbury Street in Portland next to the brewery as part of Shipyard’s $65 million brewery-hotel redevelopment project. In addition to the hotel, which might offer in-room keg service, the complex will include offices, a tasting room and parking garage.

I grew up eating all kinds of processed foods. There was a time during my youth when the morning meal consisted of Carnation Instant Breakfast washed down by Tang. One sister ate the same kind of Pop Tart every day for her entire four years of high school.

Does anyone else remember Space Food Sticks? I ate them for lunch. For the record, they do not make you grow up to be an astronaut.

One of my favorite processed dessert delights was Marshmallow Peeps. They were a simple, unhealthy Easter basket alternative to jelly beans for a gourmand of — what’s the opposite of locally sourced? — foods who wasn’t a big fan of hollow milk chocolate bunnies or white chocolate crosses.

When I went off to college, I met other peep fans. One friend from New Jersey ate a cheese pizza adorned with peeps instead of pepperoni or sausage on her birthday every March. She said the pizza oven caramelized the peep heads, giving them a toasty texture and sad faces. Other friends argued vigorously about whether one should open the package a day or two before eating to allow the peeps to get stale and “crispy.”

When he was down to a single tooth in his 90s, my grandfather swore by them. They were a perfect gummable conclusion to meals that usually started with a soft-boiled egg. He lived to be 106, so who can argue with that?

As an adult, I stopped eating peeps. It was less a matter of committing to a healthier lifestyle and more a matter of saving room for more beer. Now, my primary interaction with peeps is to use them to taunt Mike Shepherd’s brother, a food purist, on social media.

The peeps flavor palate has expanded exponentially since I was naming them before stuffing them whole into my mouth as a kid. As with everything else, you can now get pumpkin spice peeps. Red velvet peeps seem to align with an ascending trend and sour watermelon peeps with a waning one. I would definitely get up early to replace bubble gum-flavored peeps with real gum to watch my siblings gag on them. But what in tarnation are party cake peeps? Here is your soundtrack. — Robert Long

Joseph E. BeckSpecial to the Fiddlehead Focus5 days ago

Short-Term Outlook: Wednesday - Friday Cloudy to mostly cloudy skies are expected over Fort Kent and surrounding areas today as a warm front lifts across the region producing some isolated shower activity.  A cold front will approach and cross the Valley tonight and early Thursday with gusty south/southwest winds developing ahead of the front thanks to the pressure gradient.
Our Sponsors END_OF_DOCUMENT_TOKEN_TO_BE_REPLACED