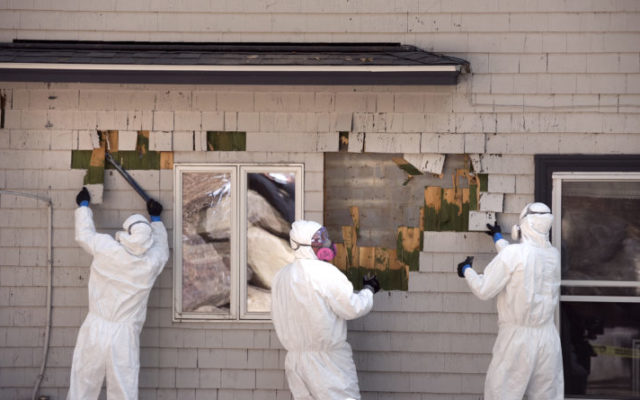 Callie Ferguson • March 20, 2019
Despite a recent push to identify kids with lead poisoning, hundreds of Maine children are likely still exposed to its harmful effects because of the state’s low, inconsistent rates of screening toddlers during their annual doctor’s check-up, according to a new report.

Despite a recent push to identify kids with lead poisoning, hundreds of Maine children are likely still exposed to its harmful effects because of the state’s low, inconsistent rates of screening toddlers during their annual doctor’s check-up, according to a new report.

The effects of lead poisoning, which causes a range of health problems, including developmental delays in kids, don’t appear until years after a child has been exposed. That means it’s imperative that parents and doctors catch the problem early.

In states with older housing stock where lead paint is prevalent, like Maine, the U.S. Centers for Disease Control and Prevention recommend that 1- and 2-year-olds get their blood tested for lead during their annual doctor’s visit.

But in 2017, only about 55 percent of 1-year-old children and 30 percent of 2-year-olds were screened for lead in Maine, which is the only New England state that does not require doctors to perform the test, according to researchreleased Wednesday by the Maine Affordable Housing Coalition, a group of public and private organizations advocating for affordable housing policy.

Wednesday’s report draws from information compiled from state and national databases and interviews with New England public health officials. It aims to single out Maine’s low testing levels, but also underscores how the state’s regulations lag other states with old homes where lead paint is commonly found. It follows similar findings on lead poisoning prevention published in January by the Maine Center for Disease Control and Prevention.

Children covered by MaineCare, the state’s Medicaid program, were not immune from the trend despite a federal law that requires enrolled children to be tested at ages 1 and 2. Maine’s rates, however, hover around 52 percent and 37 percent, respectively, for 1- and 2-year-olds.

“We do good by kids once they’re tested,” said Greg Payne of the Maine Affordable Housing Coalition. “[But] when screening rates are really low and you’re not testing kids who should be tested … those kids just continue to live in whatever toxic environment they’re in.”

That finding is expected to appear in testimony during a public hearing next Tuesday on a bill that would require universal lead poison tests for toddlers.

Among 2-year-olds, screening rates dropped significantly across the board and continued to vary. Doctors in Washington County, for instance, led Maine in 2017 by screening 81 percent of 1-year-olds, whereas Sagadahoc screened fewer than 30 percent, the study found. Sagadahoc again screened the fewest percentage of kids in 2017, only testing 9 percent of its 2-year-olds.

The study estimates that if all counties screened their toddlers as frequently as doctors in Washington County, the state would have identified an additional 853 children in 2017 with elevated lead levels in their blood.

The change prompted the state to identify more exposed kids, triggering a sevenfold increase in the number of residential buildings inspected for lead contamination, which is required if a child who lives there is flagged with elevated blood levels, according to the Maine Center for Disease Control and Prevention.

Kids who have been exposed to lead don’t usually show symptoms until the contamination has built up to dangerous levels, usually over the course of years. In addition to physical side effects, poisoning can cause learning and developmental disabilities.

The 2015 law brought Maine closer to its unmet goal of eliminating childhood lead poisoning, which a 1991 law hoped the state would achieve by 2010. Still, between 2013 and 2017, nearly 1,800 children were identified with elevated blood levels.

But likely hundreds more have gone undetected because they haven’t been tested, according to Wednesday’s study, titled “Comparative Assessment of Lead Poisoning Screening Practices in Maine & New England” and prepared by the firm Health Justice Innovations.

Among the top eight states with the oldest homes, Maine and Pennsylvania are the only two that haven’t passed a universal testing law, the report states. (The Pine Tree state has the sixth-oldest housing stock in the country.) When Connecticut implemented its law in 2009, the researchers said, it spurred the outreach among doctors that resulted in boosted screening levels.

Maine is also out of sync with federal guidelines that recommend mandatory blood testing for children in states where more that 27 percent of housing was built before 1950. Nearly 56 percent of children here are born in counties that fall above that threshold, the report states.

Last year, New Hampshire passed a universal testing a law, making Maine the only New England state without one.

As the Maine Turnpike expects 1 million travelers alone over the Labor Day weekend, policymakers are gearing up for a sprint to solve one of the state’s most intractable problems: a long-standing — and growing — transportation funding gap.
Apex Weather END_OF_DOCUMENT_TOKEN_TO_BE_REPLACED

A cold front moved through the Valley early this morning, and it will be followed by an Arctic cold front this afternoon.
Campaign Corner END_OF_DOCUMENT_TOKEN_TO_BE_REPLACED

Tomorrow, Saturday, Nov. 3, 2018, U.S. Senator Angus King (I-Maine) will continue his Get Out the Vote initiative in Aroostook County.
Our Sponsors END_OF_DOCUMENT_TOKEN_TO_BE_REPLACED