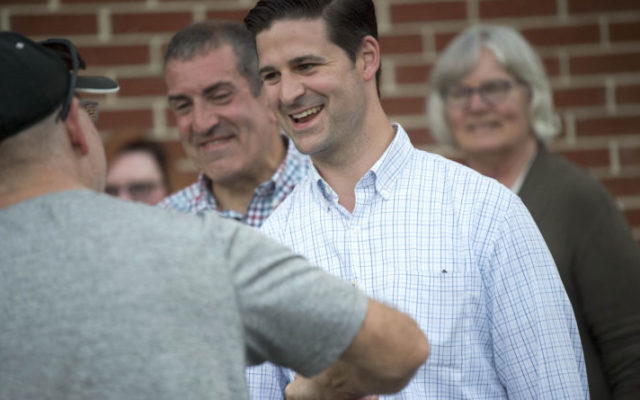 Republican leaders in Augusta are taking two approaches in responding to controversial statements made last week by Maine GOP vice chair Nick Isgro falsely linking immigrants to the outbreak of once-eradicated diseases: some are condemning Isgro’s remarks, others are avoiding them altogether. Isgro, meanwhile, is standing by his assertion that Americans should be free to not vaccinate their children against disease.

In a series of tweets sent from the Maine Republican Party’s official account last week, Isgro declared that it’s time for a “serious talk” about vaccinations and migration.

He went on to say that migrants crossing the border from countries lacking vaccinations had caused “certain diseases to return.”

Isgro’s assertions are false, according to state and federal health officials, who have reported no links between immigrants, their vaccination rates and the return of diseases such as mumps and measles. In fact, 113 countries had higher vaccination rates than the U.S. in 2015, according to the World Health Organization. And U.S. immigration laws require those seeking permanent residence here to become vaccinated for once-eradicated diseases.

Last week, Isgro stood in solidarity with an anti-vaccination contingent that is opposing bills that would eliminate most exemptions for Maine school children. And in his tweets he implied that Mainers can opt-out of vaccines as long as unvaccinated immigrants aren’t allowed to enter the country.

Reaction to Isgro’s statements exploded on social media, but Republican lawmakers in the Maine House wanted no part of remarks made under the Maine GOP twitter account and sent to its more than 6,000 followers.

“You can see John Bott. We already put out our statement,” House Republican leader Kathleen Dillingham of Oxford said, referring to a written statement that said her caucus was concerned about the budget proposal from Democratic Gov. Janet Mills, but that entirely avoided Isgro’s comments.

“We defer to him and if you want to set up a time we can talk about that,” he said. “But everything goes through John. Thanks.”

Bott said the Governor’s budget and the economy are all that House Republicans would discuss.

“House Republicans are focused on the economy and improving things for Maine,” Bott said. “That’s what we’re focused on and we won’t be sidetracked on that. The issues are too important.”

Down the hallway, Senate Republican leader Dana Dow of Waldoboro stood by a statement he released last week condemning Isgro’s tweets and calling the party’s decision to allow him to use the official Twitter account a misuse of resources. Dow, who has been criticized by some conservative activists for speaking out against Isgro, suggested in a newspaper report that he might have something more to add on Tuesday. But he said he’s standing by his original statement and his caucus is, too.

“It’s no different than what we put out before. We just disagree with this type of language, so,” he said.

Speaking across the room, assistant Senate Republican leader Jeff Timberlake described the backlash as a Maine GOP problem, not an issue relevant to elected Republicans who are focused on fiscal issues.

“To me that’s what I’m here to talk about. This, you know … what’s happening in the party is the party’s — not ours,” he said.

Reeling from bruising losses in last year’s election, the party this winter elected Isgro as its vice chair. Isgro is the mayor of Waterville, as LePage once was. And, like LePage, he has established a reputation as a controversial spokesperson for conservative values, tweeting anti-immigrant rhetoric, telling a school shooting survivor to “eat it” on Twitter, and criticizing GOP Sen. Susan Collins after she voted with Democrats in 2017 to kill an Obamacare repeal bill. Isgro also outlined his no-apologies political approach during an appearance on radio station WLOB in January.

“When Republicans are unapologetic about that they win. If you want proof of that, I live in a city where Republicans make up about 25 percent of the voter base. I have twice as many Democrats as vote in any given election than Republicans. I don’t hide from where I stand. I go out and I knock on doors and I talk to voters and I connect with them,” he said.

Isgro’s approach is apparently embraced by some activists and party leaders, who granted him access to the official Twitter account to broadcast and amplify his views. But his views are coming under fire, and not just from Democrats.

Lance Dutson, a former Collins’ staffer and political consultant last week called Isgro’s vaccination tweets disgusting. Since then screenshots of Isgro’s Facebook feed have been circulating on Twitter, including one showing that the vice chair of the Maine GOP subscribes to a group that expressed support for the shooter who killed 50 people attending a ceremony at New Zealand mosque.

Isgro said he was unavailable for interview, but in an email, he disputed any attempt to link him to “insane things” he never said.

He also wrote that he was unaware that a comment he used in a Facebook post recited the title of a book by the Italian fascist Julius Evola, a figure embraced by white-nationalist leaders such as Richard Spencer and Steve Bannon, a former adviser to Donald Trump.

Isgro said he doesn’t follow Spencer and that he had never heard of Evola.

As for his tweets regarding immigrants and vaccinations, Isgro said he’s standing by them — and so far, the Maine GOP has not deleted them.

High pressure to the east and and trough to the west will place the region in an area of southerly flow today, which will draw increasingly moist air into the region.
Our Sponsors END_OF_DOCUMENT_TOKEN_TO_BE_REPLACED