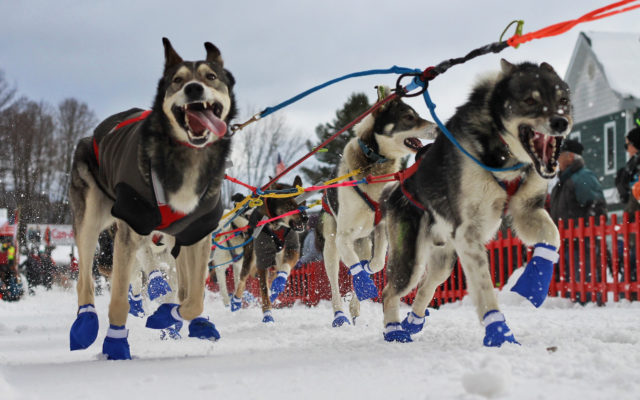 With above average snowfall in the region this winter, Can-Am President Dennis Cyr said mushers can expect high-quality trails.

“We have three to four feet of snow on the ground and the guys that work the trails have been out steady for the whole month of February (grooming them). They’ve been breaking the trails and riding them, so the trails are gonna be fine. I hope we don’t get rain but we’ve had plenty of snow this year,” he said.

Registered mushers range in age from 13 to 62 and include several newcomers to sled dog racing. Hannah Lucas, 21, moved from Virginia to Caribou where she bought a home just so she could train for the Can-Am. She will compete in the 30 mile race, her first ever dog sled competition.

“I lived in Virginia for most of my life going to dog shows and doing canicross but I decided to jump into racing head first and moved to Maine this September,” she said. Canicross is cross country running with dogs.

“It seems like a lot of races cater to sprint dogs, and I prefer to train for mid distance.

She had never traveled further north than Pennsylvania before moving to Caribou and has never even attended the Can-Am event, but said she has reviewed many videos from past Can-Am events.

Lucas and her dogs have been training for Can-Am on 15 miles of trail behind her home as well as on the Bangor Aroostook Trail System.

“It’s an indescribable feeling for me; being out on the trails with the team,” she said. “Watching them work in unison gives this overwhelming sense of accomplishment and belonging, like being a part of something bigger than yourself. It’s incredibly grounding being out in nature with (the sled dogs) doing what they were bred to do.”

Lucas, said that she, her fiance, Dean, and the couple’s 12 Siberian huskies and Seppala Siberian sled dogs cannot imagine living anywhere other than Maine.

“We were honestly unprepared for this much snow, but I’ve heard we’ve gotten an abnormal amount this year. The amount of snow is perfect for our training though. (The dogs) get to experience breaking through unpacked snow to get to the trails,” Lucas said. “Going into my first race, I’m really nervous but also excited, it’s really surreal and I feel like it will all be a dream until we take off at the starting line.”

Veteran Can-Am musher Ashley Patterson of Shirley will return to the 250 mile race, after an achilles injury prompted her to compete in the 100 mile race last year. Patterson will attempt to dethrone returning champion Martin Massicotte of St. Tite, Quebec. Massicotte has won the 250 mile race nine times throughout his mushing career, including the last five in a row.

“Can-Am is known to be the Iditarod of the East, and it does live up to its name. It is a tough race and I hear that from a lot of mushers,” Patterson said. “To be really a true hearty competitor in the Can-Am, you’ve gotta train your dogs well.”

“It’s the best race really in the lower 48 states as far as organization and quality of the course. Everything usually runs pretty much with no snags and we always have good race marshalls, so the rules are enforced and the trails are always great,” Cyr said. “Mushers know when they come to our race that they’re gonna have a quality race. The checkpoints are always fully staffed. They have good food, and friendly people to accommodate them.”

When a competitor’s truck broke down one year on a Saturday evening, a local mechanic opened his shop to fix it, Cyr recalled. “You don’t see that in other areas.”

The Can-Am committee has been meeting all year to plan the event, according to Cyr.

“We have probably 18 board members and maybe a dozen advisors who are previous board members or people that have specialty knowledge or provide assistance during a race. It’s a big organization and it always amazes people the amount of work that goes into putting on a race like this. The mushers appreciate it and that’s why they come back here year after year.”

The Can-Am Crown International Sled Dog Races will kick off at 8 a.m. on Saturday, March 2, on Main Street in Fort Kent. Mushers and their teams competing in the 100 mile race will take off from the starting line first, followed by those competing in the 30 mile race and then the 250 mile race.

For more information about the Can-Am, visit the organization’s website.

Maine’s longest serving legislator, Martin was first elected to the Maine House of Representatives in 1964 when he was 23.
Our Sponsors END_OF_DOCUMENT_TOKEN_TO_BE_REPLACED