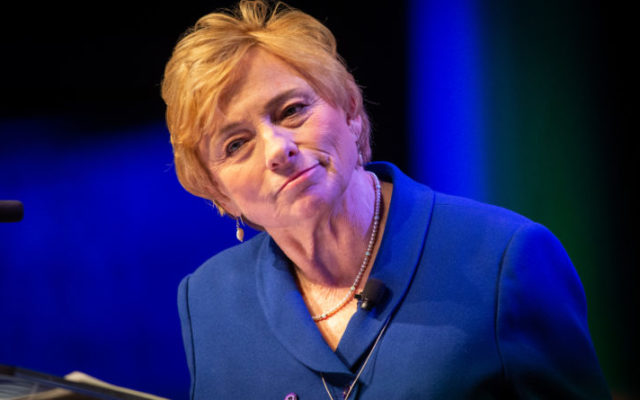 Michael Shepherd, BDN Staff • February 12, 2019
Gov. Janet Mills’ first budget address on Monday was as much about fleshing out her two-year, $8 billion spending plan as it was about reinforcing a wider course change from the era of former Gov. Paul LePage.

AUGUSTA, Maine — Gov. Janet Mills’ first budget address on Monday was as much about fleshing out her two-year, $8 billion spending plan as it was about reinforcing a wider course change from the era of former Gov. Paul LePage.

The new Democratic governor tried to thread a political needle with her budget proposal, which would hike spending by 11 percent over the baseline of the current budget while fulfilling promises to not raise taxes, fund voter-approved Medicaid expansion under the federal Affordable Care Act and boost school funding by $126 million.

Republicans have called that unsustainable because it spends more than the state forecasts it will take in over the two-year cycle, balancing after transfers. Democrats have been quieter, but progressives criticized it for locking in tax cuts enshrined under LePage, a Republican.

During a half-hour speech to a joint session of the Legislature on Monday, Mills reused a line she told reporters Friday, saying some would see her proposal to last through mid-2021 as “government spending run amok,” and others will say “we ought to spend more and more.”

“This is a pragmatic, common-sense budget that lives within our means and delivers what Maine people want,” she said.

Mills branded her proposal as a “hope” budget with a focus on “health, opportunity, prosperity and education.” She peppered her remarks with breaks from LePage on issues from Medicaid expansion to the state’s opioid crisis to a plan to reopen a state prison in Washington County.

The new governor began implementing Medicaid expansion to an estimated 70,000 Mainers — 4,500 of whom are covered now — in January after LePage stalled a law voters approved in 2017. Her budget proposal earmarks $146 million to fund the state’s share, which is expected to be matched by $1 billion in federal funds, which Mills called “the bargain of a century.”

In 2017, the liberal Maine Center for Economic Policy found that LePage had foregone roughly $2 billion in federal funds — much of that around Medicaid expansion — which he opposed because of cost concerns. Mills said her administration would work to “identify every source of benefits to which the Maine people are entitled and make sure our people get their fair share.”

Federal funds also figure into her plan to address the state’s opioid crisis, which drove overdose deaths to 417 in 2017. That figure declined slightly in the first nine months of 2018, but Maine still experienced an overdose death a day during that period.

She signed an executive order last week that set aside federal and state money for a package that includes buying 35,000 doses of an opioid overdose antidote that LePage once said “merely extends” lives. Her budget supplements those efforts with another $5.5 million.

The budget, however, is full of half-measures. Mills’ K-12 increase leaves the state roughly $200 million short of a never-met, voter-mandated threshold of covering 55 percent of local education costs. She wants to increase revenue sharing to cities and towns — while LePage once proposed zeroing in — from 2 percent to 3 percent, but that’s short of a 5 percent benchmark.

Legislative Republicans have criticized the budget for balancing at the margin of predicted revenues, which could necessitate dipping into the state’s surplus or raising taxes if projections miss. LePage said in an interview with WGAN on Monday that “the difference between Janet Mills and a drunken sailor is that a drunken sailor spends his own money.”

Senate Minority Leader Dana Dow, R-Waldoboro, said the budget must be looked at “realistically,” and Republicans “intend to work with both parties together” as the Legislature hammers out the budget by spring. He said he questions some of the figures in Mills’ proposal, which “appear to be rosier than I think they really are.”

“I question whether Maine taxpayers are really going to be held without any increases in taxes,” he said.

The upper-level low pressure area that has been parked over southern New England will continue to stall there today into the overnight period then begin to open up and shift southeast into the Atlantic Thursday.
Campaign Corner END_OF_DOCUMENT_TOKEN_TO_BE_REPLACED

Dale Crafts filed his nomination papers for Feb. 21 with the Secretary of State to officially be placed on the primary ballot on June 9, 2020, for the U.S. House of Representatives 2nd District race.
Our Sponsors END_OF_DOCUMENT_TOKEN_TO_BE_REPLACED