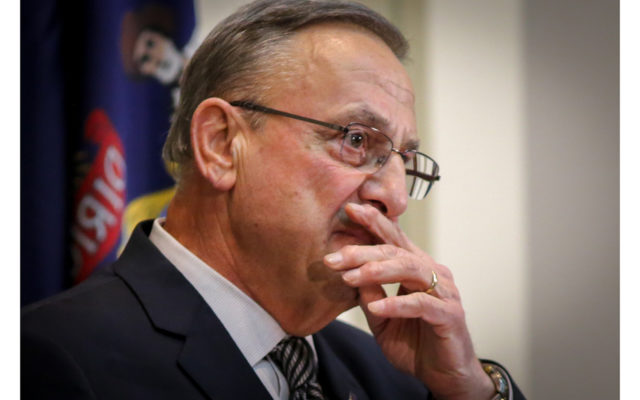 Michael Shepherd, BDN Staff • February 12, 2019
Gov. Janet Mills’ budget address to the Legislature on Monday highlighted a predictably opposite vision for Maine than the one held by former Gov. Paul LePage, who, from Florida, continues to rhetorically overshadow fellow Republicans.

Good morning from Augusta. Gov. Janet Mills’ budget address to the Legislature on Monday highlighted a predictably opposite vision for Maine than the one held by former Gov. Paul LePage, who, from Florida, continues to rhetorically overshadow fellow Republicans.

The Democratic governor’s $8 billion, two-year proposal will have issues: Legislative Republicans point to an 11 percent spending hike over the current baseline. It funds Medicaid expansion and increases education spending, but doesn’t go far enough for some progressives.

The final budget — which must come by spring — should be largely favorable to Mills with Democrats controlling the Legislature. But it’ll need two-thirds votes in both chambers, so Republicans will be able to stamp the process as they find their voices after the LePage era.

Republicans have been united on the budget so far, but LePage elbowed his way into budget coverage. Legislative Republicans responded to Mills’ budget on Friday by hitting a few key points. The most important was that they don’t believe it will balance without raising taxes or dipping into surpluses. Those are main selling points for the governor, but her proposal spends every dollar expected to be generated in revenue over the two years, balancing after transfers.

There are weedier concerns: Rep. Sawin Millett of Waterford, a well-respected former budget commissioner under LePage and the leading Republican on the budget committee, said on Friday that it puts his party in the difficult position reducing the total of the proposal — which usually goes up when it gets in the Legislature’s hands.

From his winter destination in Florida, LePage emerged for talk radio appearances on WGAN on Monday and WVOM on Tuesday. His revamped political group, Maine People Before Politics, released a critical point-by-point analysis of Mills’ proposal before her address last night.

A pithy line from LePage to WGAN — “The difference between Janet Mills and a drunken sailor is that a drunken sailor spends his own money” — made it into budget coverage on Monday. On Tuesday, he told WGAN that “everything has to go perfectly and Murphy’s Law cannot show its ugly face in the next two years for this budget to be sustained.”

LePage, however, is mostly pitching old and rejected ideas. It’s going to fall to legislative Republicans to inject others where they can. On policy, the former governor mostly in agreement with more circumspect Republicans, including Senate Minority Leader Dana Dow, R-Waldoboro.

But he and other legislators made more cautious and deferential criticisms. That makes sense, because they’re going to be in the State House hammering out details with Democrats. LePage didn’t often compromise, vetoing budgets in three out of the four cycles he presided over.

Still, LePage is pushing old ideas: He said Mills should have enshrined a hospital tax to pay for Medicaid expansion and ensure that conservation groups pay property taxes, two crusades that didn’t go anywhere during his tenure. So while he may overshadow other Republicans by his voice and ability to gin up opposition to Democrats, Republicans will need new ideas.

This Legislature has yet to send a bill to Mills since convening more than a month ago, but the lawmaking process is revving up. The House of Representatives and Senate will convene today, as will nine legislative committees.

Members of the Health Coverage, Insurance and Financial Services Committee will again consider an emergency bill, LD 477, to make interest-free loans up to $15,000 available to federal workers in Maine who would be potentially affected by another government shutdown. Committee members are expected to recommend the Legislature pass the bill.

Other bills to be considered in committee today include:

— LD 292, An Act to Feed Maine’s Residents by Allowing Dairy Dealers and Producers in the State to Donate Fresh Milk to Food Banks in the State.

— A bill that would have made it a crime for public school teachers to expose students to “obscene” materials withered in committee. The Legislature’s Criminal Justice and Public Safety Committee voted unanimously Monday to recommend against passage of LD 94, a bill sponsored by Rep. Amy Arata, R-New Gloucester. The bill sought to amend state statute to make it legal to charge teachers and school administrators with a Class C crime — a felony that could have potentially brought a fine and jail time — if they knowingly allow, without student or parental consent, students to be exposed to violent or sexually explicit material in the form of literature, art or film. Arata said her emphasis was to ensure better student or parental notification about potentially troublesome curricula, but lawmakers on the panel found fault with the criminal aspects, with many suggesting that she submit more policy-based legislation to the education committee.

— Legislative leaders and their staff continue to try to address concerns about sexual harassment at the State House. After several lobbyists complained about the content and tone of mandatory anti-sexual harassment training, Senate Majority Leader Nate Libby, D-Lewiston, who sponsored the legislation, asked that a contracted trainer not return to complete the program. Instead, the Legislature’s human resources director will work with lobbyists to try to promote a better understanding of the power dynamics that can be adjusted to reduce the chance of sexual harassment among legislators, staff and lobbyists.

— Maine tribal leaders told lawmakers that it’s time to get rid of Columbus Day. Maine Public reports that leaders of the Penobscot Nation and other supporters offered arguments to a legislative committee Monday for why changing the holiday from Columbus Day to Indigenous Peoples’ Day would represent an important first step in correcting the historical record and rebuilding trust with the first inhabitants of Maine and the rest of the nation. Many Maine cities and towns have already made the change at the municipal level, and bill sponsor Rep. Ben Collings, D-Portland, said it’s only a matter of time before the change is universally embraced around Maine.

— Members of a special congressional panel say they might have a deal to avert a shutdown on Friday. The Washington Post reports that key lawmakers expressed guarded optimism late Monday that they would be able to avoid another government shutdown, saying they were making progress in a series of late-stage meetings meant to resolve disputes about immigration rules. We’ve heard this all before. Here is their soundtrack.

Abraham Lincoln was born in a Kentucky cabin 210 years ago today.

When I was a kid, we got his birthday off as a holiday. I always felt he got cheated when they consolidated his birthday with George Washington’s to create Presidents Day. The guy deserves his own holiday, especially if Christopher Columbus still has one.

But enough sour grapes. In our relentless effort to inform, amuse — and educate — you, our dear Daily Brief readers, here are some fun facts about Lincoln on his birthday:

— He was the first president to be born outside the original 13 states.

— Neither Lincoln County nor the town of Lincoln in Maine are named after him and he never came to the state, though Hannibal Hamlin, his first vice president, and William P. Fessenden, who served as treasury secretary under him, were from here.

— He was the only president to secure a patent.

— He was inducted into the national wrestling hall of fame.

— He hated being called “Abe,” and preferred to be called by his last name.

— He had no middle name.

— He was apparently obsessed with cats. When he was president, his cat Tabby reportedly ate at the dinner table with him. Supposedly, they loved chicken casserole. Of his other cat, Dixie, Lincoln reportedly said, “Dixie is smarter than my whole Cabinet! And furthermore she doesn’t talk back!”

Those last two are my favorites. We might have to name a cat after him.

If that’s not enough for you, click here for more Lincoln trivia. And write your members of Congress to urge them to make Feb. 12 a national holiday again. Here is your soundtrack. — Robert Long

The upper-level low pressure area that has been parked over southern New England will continue to stall there today into the overnight period then begin to open up and shift southeast into the Atlantic Thursday.
Campaign Corner END_OF_DOCUMENT_TOKEN_TO_BE_REPLACED

Dale Crafts filed his nomination papers for Feb. 21 with the Secretary of State to officially be placed on the primary ballot on June 9, 2020, for the U.S. House of Representatives 2nd District race.
Our Sponsors END_OF_DOCUMENT_TOKEN_TO_BE_REPLACED