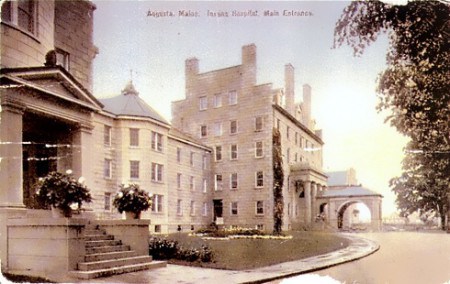 Michael Shepherd, BDN Staff • February 4, 2019
The New England Patriots are Super Bowl champions, but you probably knew that already. We’re on to the news.

The New England Patriots are Super Bowl champions, but you probably knew that already. We’re on to the news.

Maine may be getting ready to wind down the court settlement that has held its mental health system accountable for nearly three decades, but advocates still have concerns and such a move would probably happen over a matter of years with ways to revive court oversight.

At issue is the consent decree of 1990, which settled a lawsuit from patients of the former Augusta Mental Health Institute after overcrowding at the institution, a lack of capacity in the community mental health system and other problems partially led to the deaths of 10 patients.

A smaller Riverview Psychiatric Center has now replaced AMHI and conditions there have improved since the hospital was decertified by the federal government in 2013. Recent progress reports show a system largely compliant with the decree, but there is more to do before retiring it and its effectiveness has been questioned.

The consent decree highlighted and tried to rectify problems on Maine’s sometimes fraught path away from institutionalization.AMHI dates back to 1840, when Maine was part of what was intended as a progressive movement that got people with mental illnesses out of jails and communities and into an institution where they could be looked after holistically. An imposing campus was built on Augusta’s east side and one of the first superintendents, Isaac Ray, helped to influence the rise of the insanity defense.

The institution grew into the 1900s, peaking at more than 1,700 patients in 1960. Around the end of that decade, Maine joined the national movement of deinstitutionalization in favor of community-based care. The number of patients dropped from 1,500 in 1970 to 350 in 1975.

The consent decree came in the wake of that, establishing benchmarks for Maine’s mental health system with the goal of avoiding hospitalization as much as possible, maintaining a flexible community service system and protecting patient rights. Advocates have argued — including in a 2017 series from Pine Tree Watch — that the priorities set forth in consent decree have gone unfunded since its inception, making it essentially ineffective.

In 2014, the state set up a mental health unit at the Maine State Prison after violent attacks on staff and patients at the decertified Riverview — where handcuffs and Tasers were used on patients — and that move was cheered by advocates under the circumstances. Now, they agree with the state that Riverview is close to regaining certification.

In an interview, Wathen said the state is complying with “90 plus” percent of the decree and the wind-down would probably happen over the course of two or three years. He said wind-down legislation would also contain a monitoring provision that would outline conditions for the decree to return if needed.

It’s still unclear when the legislation will be introduced, though the parties agree on the parts of the decree they aren’t meeting — the management of contracts for outside services. housing, timely access to services and employment opportunities.

Any agreement would likely include a provision for clients to have cases reviewed by the Maine Department of Health and Human Services when services don’t match what they want, said Kevin Voyvodich, a lawyer for Disability Rights Maine, the group representing patients.

Five legislative committees will meet today, mostly to hold public hearings on referred bills. The bills up for discussion include, “ An Act to Amend the Laws Governing Beano,” in the Veterans and Legal Affairs committee meeting; “ An Act to Prohibit the Dissemination of Obscene Material by Public Schools” before the Criminal Justice and Public Safety committee; and an “ Act to Provide for Nonpartisan Elections for Office of the District Attorney” in the Committee on State and Local Government meeting.

Some Maine teachers plan to speak in favor of “An Act to Increase the State Share of the Cost of Health Insurance for Retired Teachers,” before the Education and Cultural Affairs committee, according to the Maine Education Association. The bill calls to increase the state’s contribution to retired teachers’ health insurance by 5 percent annually, until the state has covered 90 percent. Find a complete committee schedule here.

— All of the Democrats on a legislative committee backed Portland’s former police chief to become the state’s public safety commissioner, enough to offset opposition from all the Republicans on the panel and scores of gun-rights advocates. The Public Safety and Criminal Justice Committee’s confirmation hearing for Michael Sauschucklasted almost six hours, with a majority of the more than 100 people who signed up to testify Friday speaking against him. But when it was done, the former Portland police chief won the panel’s recommendation on an 8-5 party-line vote. Sauschuck incurred the wrath of Mainers who perceived him as a threat to their 2nd Amendment rights largely because he campaigned publicly for a 2016 background check referendum and wanted to keep in place a concealed-weapon permit requirement lawmakers nixed in 2015. In what will largely be a formality, the Senate will hold confirmation votes for Sauschuck and all but one of Mills’ remaining Cabinet picks this week.

— The secretary of the Navy visited Bath Iron Works on Friday. In his second visit to Bath in the past two years, Navy Secretary Richard Spencer toured the shipyard with Maine’s congressional delegation but did not answer media questions or discuss how possible defense budget cuts in 2020 might affect a frigate-building program for which Bath Iron Works is competing.

— After a brief respite, Maine should be back to “The Way Life Should Be.” When Mills followed through on her inaugural address vow to erect a turnpike sign in Kittery that reads “Maine Welcome Home,” a sign reading “Maine: The Way Life Should Be” was removed. That sparked a minor uproar, which Mills’ office moved quickly to quell on Friday. WGME reportsthat a sign with that slogan will return.

Pear of the dog

The day after the Super Bowl should be a national holiday. Or at least a government-sanctioned day of recovery. It could prevent 17 million peoplefrom using up a sick day.

Sadly, Congress is preoccupied with shutdown quarreling, and none of the more than 2,400 pieces of legislation submitted in Maine this year aims to establish a state holiday that would essentially be a Boxing Day for lushes.

Lacking that foresight and humanitarianism by elected officials, as a public service for those who might have overindulged during or after Sunday’s extravaganza, we offer this Monday morning list of tips for a speedy recovery from the bloating and discomfort brought on by devouring too many wings, IPAs, Doritos and pints of Belichex gelato.

The last bit of advice on that list is “Look for Pleasure.” Isn’t that how we got into this mess?

For future reference, here’s a 2015 report from our boss about a scientist-approved way to prevent hangovers. A research group in Australia, where people know a thing or two about excess, apparently discovered by accident the preventive magic of quaffing the juice of Asian pears before downing a dozen or so longnecks or stubbies. Maybe I can get Hanny’s to deliver.

In the meantime, we’ll tap the keyboards as quietly as we can and avoid bright lights. Here is your low-volume soundtrack. — Robert Long

The upper-level low pressure area that has been parked over southern New England will continue to stall there today into the overnight period then begin to open up and shift southeast into the Atlantic Thursday.
Campaign Corner END_OF_DOCUMENT_TOKEN_TO_BE_REPLACED

Dale Crafts filed his nomination papers for Feb. 21 with the Secretary of State to officially be placed on the primary ballot on June 9, 2020, for the U.S. House of Representatives 2nd District race.
Our Sponsors END_OF_DOCUMENT_TOKEN_TO_BE_REPLACED