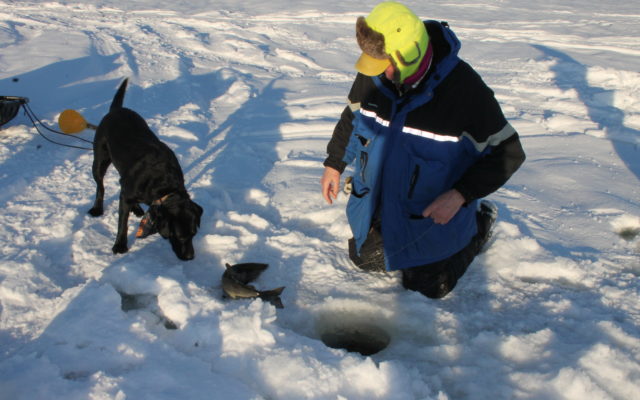 Morgan Mitchell • January 28, 2019
More than 1,121 people converged on Long Lake and the surrounding area over the weekend to participate in the 14th annual Long Lake Ice Fishing Derby, which the Long Lake Sporting Club sponsored to benefit the Edgar J. Paradis Cancer Fund.

SINCLAIR, Maine — More than 1,121 people converged on Long Lake and the surrounding area over the weekend to participate in the 14th annual Long Lake Ice Fishing Derby, which the Long Lake Sporting Club sponsored to benefit the Edgar J. Paradis Cancer Fund.

Despite nasty weather on Thursday, fishermen said they were thankful Saturday for the rain that helped to pack down the snow which accumulated from last weekend’s storm. Still, the lake conditions were less than ideal for trekking out to the fishing cabins from the sporting club.

Regardless, the sun shone on participants and their families Saturday morning as people trickled in for officials to tally their fish. Fishermen brought salmon, brook trout, togue, cusk and yellow perch to the official weigh station, located at derby headquarters at the Sporting Club. Meanwhile, all the muskie went to Joe’s Country Store in St. Francis.

Before 9 a.m. people were already bringing their fish to headquarters, including 6-year-old Stephen Pernier from Baileyville, who caught a 4-pound salmon. Pernier said he had been out there only a couple hours before he caught his first fish. This was his first year fishing in the derby, though his father had participated in the derby for the last three years.

“I wanted to do it because it is fun, and my dad likes it,” young Pernier said. He added that “it felt good” to catch the larger salmon. 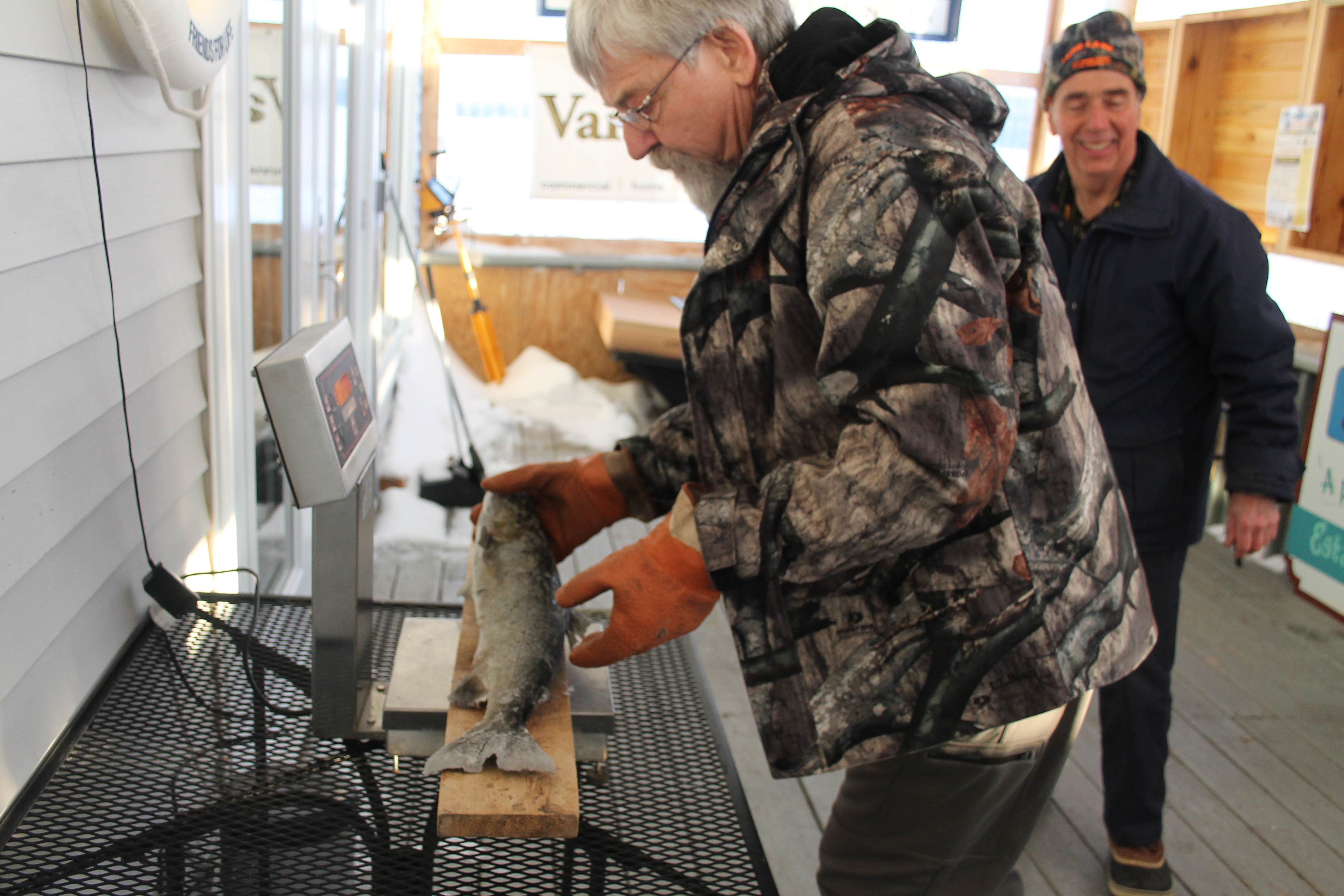 A few VIP anglers were on the lake Saturday, including the Paradis brothers who started the Edgar J. Paradis Cancer Fund. The modest pair, Roland and Danny, were fishing for the cause. Their brother, Edgar, died from leukemia, and the brothers initiated the fund to help those in the area that cancer affects.

Wilfred Saucier, a friend of the Paradis family, fished with the two. The bond between Saucier and the brothers appeared to run deeper than the frozen lake.

“I didn’t believe in the Edgar J. Paradis Fund until my wife got cancer,” Saucier said. “The help that she got was very good.”

Saucier said he was there Saturday to help the cause and “do everything [he] can” for the cancer fund.

“If this keeps up, a lot of people are going to get some help, and that is very good,” he said.

The fishing continued through Saturday into Sunday before the awards ceremony. At that point, the fishermen gathered at the sporting club headquarters for announcements of the winners, which included the following.

Darren Donovan won first place in the cusk category for his fish weighing 9 pounds, 5.4 ounces. Kent Raymond took both second and third for cusk weighing in at 6 pounds, 14.8 ounces, and 6 pounds, 0.8 ounces.

In the contest for catching the most perch, Dillon Drew earned first place for 169, with Shawn Bugbee coming in second with 166 and Westley Hitchcock taking third place for 133.

Maine is more than eight months into Medicaid expansion under the federal Affordable Care Act and trends around who is enrolling and where they live are starting to emerge, bucking some expectations and pointing out access challenges.
Apex Weather END_OF_DOCUMENT_TOKEN_TO_BE_REPLACED

Low pressure will track into the Atlantic from off the Southeast coast tonight into Thursday with increased cloudiness this evening into the overnight hours.
Campaign Corner END_OF_DOCUMENT_TOKEN_TO_BE_REPLACED

Democratic presidential candidate Mike Bloomberg’s campaign will host 25 events in Maine this Saturday and Sunday as part of a nationwide “Weekend of Action” to engage supporters and build on the momentum of the campaign.
Our Sponsors END_OF_DOCUMENT_TOKEN_TO_BE_REPLACED