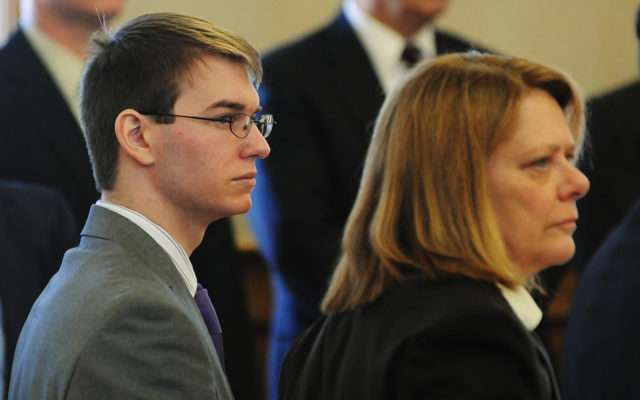 Jen Lynds, BDN Staff • January 4, 2019
A superior court justice has denied the petition of an Ellsworth man convicted six years ago of a brutal triple slaying in southern Aroostook to have the courts review and possibly retry his case.

AMITY, Maine — A superior court justice has denied the petition of an Ellsworth man convicted six years ago of a brutal triple slaying in southern Aroostook to have the courts review and possibly retry his case.

Attorney Hunter Tzovarras argued on behalf of Thayne Ormsby, 28, who is imprisoned at the Maine Correctional Center in Windham, that the state failed to pursue an alternative suspect in the case and that Ormsby’s defense counsel was ineffective.

In June 2012, Superior Court Justice E. Allen Hunter sentenced the then 22-year-old to three life terms in prison for stabbing to death Jeffrey Ryan, 55, Ryan’s son Jesse, 10, and Ryan family friend Jason Dehahn, 30. All three were found dead about 27 hours after they were killed on June 22, 2010, at the elder Ryan’s home on U.S. Route 1, according to police. The state medical examiner determined each died of multiple stab wounds.

A jury of seven men and five women found Ormsby guilty of three counts of murder as well as arson for burning Jeff Ryan’s truck after he stole it from the murder scene. Justice Hunter sentenced Ormsby to 15 years on the arson conviction, to be served consecutively with the life sentences. At trial, Ormsby was represented by James Dunleavy and Sarah LeClaire, attorneys from Presque Isle.

Ormsby had moved to Orient just weeks before the murders to live with Robert and Joy Strout. Court testimony revealed there was animosity between the Strout family and Jeff Ryan because Ryan had once had a relationship with Tamara Strout, Robert and Joy’s daughter. Tamara Strout eventually had a child with Ryan. Robert Strout also told Ormsby that Ryan was a drug dealer, which police said there was no evidence to support.

After his conviction, Dunleavy and LeClaire filed an appeal with the Maine Supreme Judicial Court, arguing that Ormsby’s convictions should be overturned based on several factors, including that his rights to an attorney and to remain silent were violated by police and that he was denied a change of venue despite prejudicial pretrial publicity.

The justices found no basis to support the arguments and in October 2013 upheld the convictions.

In the latest appeal, Ormsby’s new attorney Tzovarras claims that Ormsby’s clearly established Fifth Amendment rights under the U.S. Constitution were violated in a July 2, 2010, interrogation by police and that the trial court and supreme court both erred in not suppressing statements provided during that interrogation. He also alleges that Ormsby’s defense counsel was ineffective by not developing and presenting a defense of an alternative suspect to the murders. Tzovarras said that the now deceased Robert Strout should have been considered as an alternative suspect and that he was known to the defense at the time of trial.

In his decision, issued on Jan. 3, 2019, Justice E. Allen Hunter wrote that there would have been a significant risk in “putting Robert Strout on the witness stand,” and that most jurors would have doubted that a man of his age would have been physically capable of committing the murders.

In denying the petition for post-conviction review, Hunter further wrote that the court found that Dunleavy and Leclaire “fulfilled their professional obligations to the petitioner” and that “Ormsby had failed in his burden of proving that his trial attorneys had provided ineffective assistance of counsel.”

Only one member of Maine’s congressional delegation had come out in favor of impeaching President Donald Trump ahead of House Speaker Nancy Pelosi’s Tuesday announcement that the Democratic-led House of Representatives would begin an impeachment inquiry.
Apex Weather END_OF_DOCUMENT_TOKEN_TO_BE_REPLACED

A strong upper-ridge anchored off the Southeastern US coast will bring warmer and more humid than normal conditions to the Valley through the late week period.
Campaign Corner END_OF_DOCUMENT_TOKEN_TO_BE_REPLACED

Dale Crafts filed his nomination papers for Feb. 21 with the Secretary of State to officially be placed on the primary ballot on June 9, 2020, for the U.S. House of Representatives 2nd District race.
Our Sponsors END_OF_DOCUMENT_TOKEN_TO_BE_REPLACED