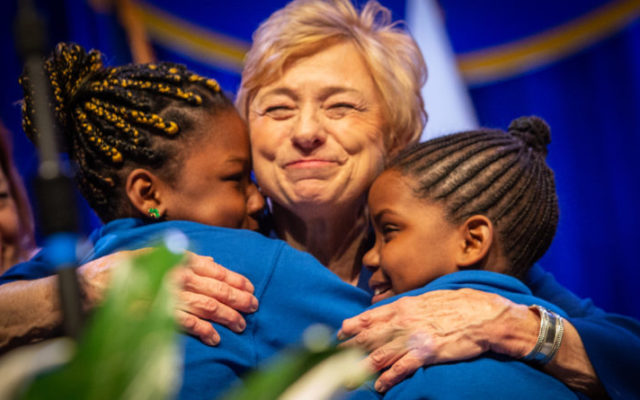 Gov. Janet Mills said she wants to bring back the Children’s Cabinet. Here’s what that is.

Jake Bleiberg, BDN Staff • January 4, 2019
During the past year, the violent deaths of two little girls and the prevalence of mental illness among teens in Maine’s youth prison have stoked worries about how the state cares for its kids.

During the past year, the violent deaths of two little girls and the prevalence of mental illness among teens in Maine’s youth prison have stoked worries about how the state cares for its kids.

The prominence of these concerns earned them a place in the inauguration speech of Gov. Janet Mills. But the Democrat’s first move to address complex issues that span the work of different state agencies will likely be obscure to most Mainers.

“With so many young people at Long Creek [Youth Development Center], with children waiting for critical mental health services and some even losing their lives to violence in their own homes, it is high time we put children’s health and safety first,” Mills said Wednesday. “I will start with one simple step — calling together the Children’s Cabinet for the first time in years to tackle these issues.”

So what is the Children’s Cabinet? And why hasn’t it been meeting?

First established by Gov. Angus King in 1995 and ensconced in law four years later, the Children’s Cabinet is a forum the heads of state agencies have used to collaborate on policies to help kids, from education initiatives to criminal justice reforms.

When the Cabinet was operating, the commissioners of corrections, education, health and human services, public safety and labor would hold monthly meetings, separate from normal Cabinet meetings, to discuss children’s issues and design policies.

Over the years, the Cabinet grew to have a staff of one full-time and two part-time employees, who were partially paid through outside grants. Along with policy work, the staff helped state agencies and nonprofits bring in outside money to support services for Maine children.

From 2002 to 2010, the group helped attract tens of millions of dollars in federal and private grant money to support programs in Maine, according to a summary of the panel’s work written by its staff for the new administration of Gov. Paul LePage in 2010.

But when LePage took office in 2011, promising to bring a small-government ethos and businessman’s touch to centralized executive power, he quietly closed the Cabinet.

Although the law establishing the Cabinet remains on the books, the group appears not to have sent required reports to the the Legislature and top Maine court during the LePage administration. No annual report from the Children’s Cabinet could be found from after 2010, though earlier ones were on file with the state law library.

Unannounced at the time, a spokeswoman for LePage said last year that he encouraged collaboration among state agencies but did not see the need for a “duplicative” structure to do so.

It’s difficult to directly measure the impact the Children’s Cabinet had when active and the effect of its closure, in part because the body’s purpose was to coordinate among and attract money to other organizations.

In their report to LePage, the Cabinet’s staff state that the group helped direct $40 million to programs to aid Maine youth over eight years by pairing federal and private grant money with $24 million of state, local and private spending.

Rabinowitz, however, suggested that the cabinet was unimportant to attracting these grants, and that the LePage administration achieved the same outcomes with “more streamlined management and fewer employees.”

[I grew up in poverty. Education was my pathway out]

For instance, the proportion of Maine children living in extreme poverty was higher in 2004 than at any point while LePage was governor, according to a survey by the Annie E. Casey Foundation.

And while the 2017 and 2018 deaths of 4-year-old Kendall Chick and 10-year-old Marissa Kennedy prompted scrutiny of state Child Protective Services, five children under the age of 3 were murdered in 2008, which had the highest number of homicides in recent years.

Still, as Maine’s youth prison has seen an influx in recent years of young people in dire need of mental health care, some who work with troubled kids have seen the need for greater collaboration between state departments.

Cumberland County Assistant District Attorney Christine Thibeault called the Children’s Cabinet “essential” and said that without communication at the highest levels of state agencies the services they’ve offered kids have often been “fragmented and ineffective.”

The longtime youth prosecutor said she listened to Mills’ inauguration speech while driving home Wednesday. When she heard that the Children’s Cabinet would be reconstituted, Thibeault began clapping in her car, she said.

Cloudiness in the region Thursday afternoon along with a slight chance for isolated showers Thursday night and Friday.
Crown Politics END_OF_DOCUMENT_TOKEN_TO_BE_REPLACED