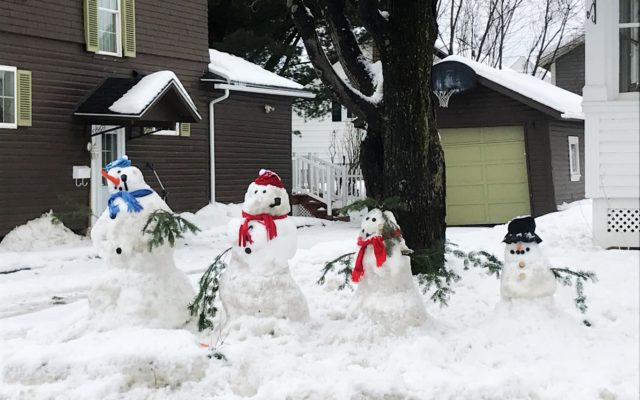 ‘Solstice soaker’ could wipe out white Christmas for much of Maine

Jen Lynds, BDN Staff • December 19, 2018
Although much of Maine has experienced an early start to winter, forecasters at the National Weather Service in Caribou said that much of the snow could be wiped out by Christmas in some parts of the state.

CARIBOU, Maine — Although much of Maine has experienced an early start to winter, forecasters at the National Weather Service in Caribou said that much of the snow could be wiped out by Christmas in some parts of the state.

Vic Nouhan, lead forecaster for the NWS in Caribou, said Tuesday that forecasters were calling for rain and freezing rain to begin on Thursday and continue through Saturday. Such weather conditions are likely to substantially melt the snow that has built up in parts of the state since October.

“Certainly, you are going to see a substantial reduction in Aroostook County,” Nouhan said Tuesday. “And it is likely going to reduce all of it in Down East Maine. The further north you go, the more likely you are to have snow. Right now, in northern Maine, there is 20 inches of snow. We are estimating the rain could reduce it to 10 inches of snow. So you aren’t going to see a white Christmas in all parts of Maine.”

The weather service indicates that an inch or more of snow on the ground constitutes a “white Christmas.”

The total amount of snow in Aroostook has varied over the years, but Caribou has met the criteria every year since 2011. Last year, Caribou had 18 inches of snow on the ground on Dec. 25, but in 2010, there was less than an inch.

While Bangor isn’t incredibly far from Caribou, the community has received significantly less snow during the holiday season and has had a total of five white Christmases since 2010. However, even during those five instance, the snow total was always in the single digits.

Nouhan said that forecasters also are watching some rivers for potential flooding.

“We could have a solstice soaker,” Nouhan said, noting that the winter solstice begins Friday, Dec. 21. It is the shortest day of the year in the northern hemisphere. “Seriously, these weather events seem to happen during the solstice more often than not. After the rain, Christmas Day should be fair and cold, but there will likely be no additions to the snowpack.”

He said that the next snow event could be on late on Dec 27 and Dec 28.

As the Maine Turnpike expects 1 million travelers alone over the Labor Day weekend, policymakers are gearing up for a sprint to solve one of the state’s most intractable problems: a long-standing — and growing — transportation funding gap.
Apex Weather END_OF_DOCUMENT_TOKEN_TO_BE_REPLACED

A cold front moved through the Valley early this morning, and it will be followed by an Arctic cold front this afternoon.
Campaign Corner END_OF_DOCUMENT_TOKEN_TO_BE_REPLACED