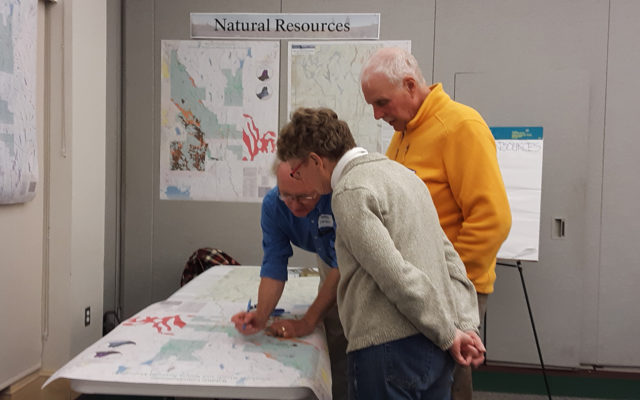 Melissa Lizotte • October 21, 2018
More than two years after then U.S. President Barack Obama designated over 80,000 acres of land in northern Maine as the Katahdin Woods and Waters National Monument, officials are in the midst of creating a formal management plan that will strive to make effective use of the land for visitors while keeping its natural resources and history intact.

PRESQUE ISLE, Maine — More than two years after then U.S. President Barack Obama designated over 80,000 acres of land in northern Maine as the Katahdin Woods and Waters National Monument, officials are in the midst of creating a formal management plan that will strive to make effective use of the land for visitors while keeping its natural resources and history intact.

During a Wednesday night meeting held at the University of Maine at Presque Isle’s Campus Center, members of the public interacted with monument officials to make suggestions regarding how to best divide the land between various recreational opportunities and showcase the area’s significance.

A majority of the more than 20 individuals attending were avid volunteers or visitors of the monument or recreational enthusiasts.

After a brief introduction, the participants spent much of the evening visiting the six stations set up to allow them to ask questions of staffers and offer suggestions about the six specific topics — land use and forestry, recreation, natural resources, Katahdin Woods and Waters National Monument significance, scenic resources and cultural resources.

Noel Musson, consultant for The Musson Group, who is assisting monument officials with the development of the management plan, stated that the set-up was similar to previous meetings that he and officials held in January and April 2018 near the Katahdin region.

“We’re in the process of creating two documents: a management plan foundation document and a management framework,” Musson said.

He explained that the foundation document will be a summary of the resources available in the monument area, the land’s cultural and historic value, the monument’s purpose and significance, and special mandates concerning use of the land. The management framework will provide officials with a framework for decision making and identify potential opportunities and conflicts regarding management of the monument lands.

As part of the 13 deeds that designated the 87,563 acres of land, formerly owned by Burt’s Bees owner Roxanne Quimby, monument leaders have three years to create a management plan “with full public involvement,” a process that began shortly after President Obama signed the executive order establishing Katahdin Woods and Waters as a national monument in August 2016.

After they hold similar public information meetings in Brewer and Portland later this fall, monument officials will use the feedback they’ve received to complete a draft of the foundation document by early 2019 and a draft of the management framework by no later than September 2019. They expect to complete the final version of both documents and present them to the public by the end of 2019.

Katahdin Woods and Waters Superintendent Tim Hudson stated that the monument currently allows hunting on parcels located east of the East Branch of the Penobscot River, except for live bear baiting and with chase dogs, and sledding and snowmobiling on trails that change yearly depending on which areas of the monument are plowed. The monument features 75 miles of hiking trails and 50 miles of biking trails and serves as the beginning of the International Appalachian Trail in Maine, which runs for 32 miles through the monument and 130 miles in the state altogether.

The area also has a history associated with the lumber industry in Maine, a cultural connection to the state’s Wabanaki tribes and some of the most notable geological features and scenic views, according to Hudson.

“What we would like to see is people getting a variety of uses out of the land while also maintaining the monument’s natural resources,” Hudson said.

Participants took advantage of the informal open house format to discuss the monument’s potential with officials. Elaine and Eric Hendrickson of Presque Isle spent much time at the natural resources table with Terry Dewan, a monument official, talking about the trails that they’ve enjoyed most as volunteer tour guides at Katahdin Woods and Waters.

“We’ve led biking and hiking trips through parts of the monument and have done research on the area’s history to incorporate into the trips,” said Elaine Hendrickson, who is the secretary for the International Appalachian Trail Maine Chapter. “There are some great trails near Orin Falls and I enjoy biking near Haskell Rock on the east side of the Penobscot River.”

The couple noted that they came to the public meeting because they have been involved with the development of the monument since its beginnings and want to help people discover the unique recreational opportunities. Eric Hendrickson suggested that the Katahdin Woods and Waters team expand its outreach to other outdoor groups such as bird watchers.

“One of our biggest user groups has been bird watchers. On some days we’ve led six to seven individual groups on birding trips,” Eric Hendrickson said.

During the wrap-up portion of the meeting, people got to share other questions with the entire group. Kirk St. Peter, a board of directors member for the International Appalachian Trail Maine Chapter, asked if electric bicycles were allowed on monument lands.

Hudson said that only Class One and Class Two electric bicycles are currently allowed in sections of the monument. Class One electric bicycles are also known as pedal assist or pedelec bicycles and require some pedaling from the cyclist while Class Two models have a throttle that propels the bicycle forward without additional pedaling. A Class 3 model is called a speed pedelec and is considered a motor vehicle, which requires the cyclist to be a licensed driver.

“We’re currently looking at the overall use of electric bicycles to consider their impact on non-vehicle trails in the monument,” Hudson said. “Right now vehicles are allowed to operate on the Loop Road.”

Other members of the audience praised the monument’s emphasis on the land’s historical and cultural significance and suggested that officials create displays in various parts of the monument area that tell specific stories, especially of Native American culture. Musson thanked everyone for giving their input and realizing that all aspects of the monument they emphasized are interconnected.

“With all these stations, we’re telling a story of the monument, how the land has inspired people and how it can continue to do so,” Musson said.

The next public meeting for the Katahdin Woods and Waters National Monument management process is scheduled for Tuesday, Oct. 30, at Jeff’s Catering in Brewer while a Portland meeting is planned for Wednesday, Nov. 14, with the time and location still to be determined.