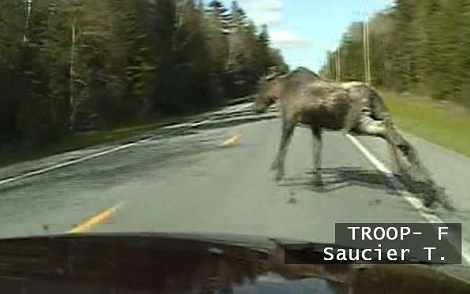 Morgan Mitchell • September 4, 2018
State officials from the Maine Department of Transportation and Maine Department of Inland Wildlife and Fisheries were invited to speak at a forum here Thursday night by state Sen. Troy Jackson, after the lawmaker received several phone calls from “emotional people” regarding an uptick in moose accidents in the area.

FORT KENT, Maine — State officials from the Maine Department of Transportation and Maine Department of Inland Wildlife and Fisheries were invited to speak at a forum here Thursday night by state Sen. Troy Jackson, after the lawmaker received several phone calls from “emotional people” regarding an uptick in moose accidents in the area.

According to Maine DOT statistics, there have been an estimated 67 moose-related vehicular accidents in Aroostook County this year, with a majority of the accidents occurring on Route 11.

While Thursday’s presentation was designed to give locals an opportunity to discuss their concerns and possible solutions with state officials, the conversation took an unexpected turn, according to Jackson.

“What frustrated me was that different discussions broke out than for what the people were there to discuss,” he said Friday.

The event started with Lee Kantar, a moose biologist with the Maine Department of Inland Fisheries and Wildlife, giving a presentation on how the department is counting and keeping track of moose and his citing evidence of findings that winter ticks and other parasites are a problem in the moose population.

Then at one point, Hilton Hafford, one of less than 10 people in the audience, said that herbicides being sprayed by woods industry companies were driving the moose off their lands and causing them to congregate in smaller areas. That overpopulation in smaller areas, Hafford argued, was making them more susceptible to disease and parasites.

“Is the spray affecting the moose?” he asked Kantar.

When Kantar was unable to answer the question, another attendee interjected and condemned the panel saying, “You’re going to kill them all. You sounded good until you got to the real issue, and then you didn’t know what to say.”

From that point, the conversation took another turn as audience member Jody Spears took the conversation in the direction of moose hunting permits and argued that legislators should lower the amount moose permits, if not end the hunt altogether.

Jackson stressed that no one at the meeting was proposing increasing the moose hunt to reduce the number of accidents.

By the end of the forum, a DOT representative was able to address the crowd and state that the agency would like to see the brush along the sides of some more problematic roadways cleared so drivers can better see moose in advance of one walking out in front of a vehicle.

“[DOT will] look into whether there are some safety funds available to do projects like that to see if there is an opportunity to get clearing to see if that will help,” Bob Watson, the region manager for DOT, told the crowd.

Jackson agreed with that sentiment and added Friday that the MDOT is responsible for clearing roadsides anyway, not just because of the moose, but also to “keep the sun shining on the road [in the winter] to help melt the ice on the roadways to keep them clear.”

“I’m going to work with the DOT and if we need to get more funding we can try to do that,” Jackson said, referring to possible legislative efforts.

As the Maine Turnpike expects 1 million travelers alone over the Labor Day weekend, policymakers are gearing up for a sprint to solve one of the state’s most intractable problems: a long-standing — and growing — transportation funding gap.
Apex Weather END_OF_DOCUMENT_TOKEN_TO_BE_REPLACED

Mostly cloudy skies will develop after midnight as a warm front moves across the area with some snow flurries possible overnight.
Our Sponsors END_OF_DOCUMENT_TOKEN_TO_BE_REPLACED