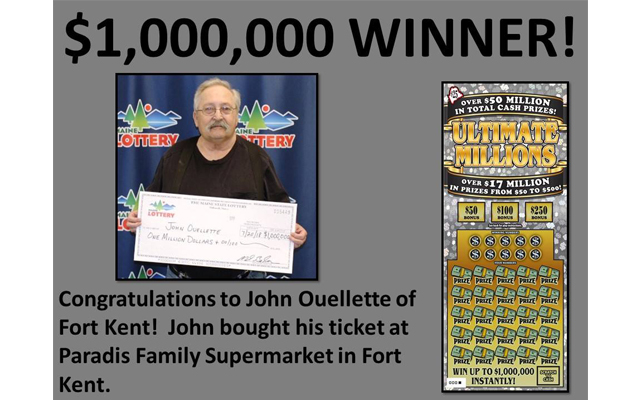 John Ouellette of Fort Kent brought home a million dollars by scratching a winning ticket he purchased from the local Paradis Shop ‘n Save grocery store in July.

Ouellette, 67, is a retired mill worker and master Maine Guide. He and his wife Rose have been married for 44 years.

Ouellette said Monday that his wife did not believe him when he first told her he won $1 million on an “Ultimate Millions” scratch off ticket from the Maine State Lottery.

“We were right here sitting down. I had bought six tickets of the same game, and I brought them home. They’re $25 tickets. My wife said, ‘Boy you spent a lot of money on that.’  Anyways, I sat down and started scratching, and I noticed I had won,and I said that to my wife and said, ‘Holy cow.’ She didn’t believe me at first, but it was true.”

Ouellette said he had a gut feeling that at least one of the four winning tickets the game offered with a $1 million prize would be sold in Fort Kent, which prompted him to purchase so many of the tickets, but he really did not expect to be the lucky winner.

Paradis Shop ‘n Save also picked up $10,000 for selling the winning lottery ticket, according to lottery officials.

“We want to congratulate Mr. Ouellette on his winnings; we wish him the best,” said Paradis Shop ‘n Save co-owner Dawn Daigle on behalf of the company’s board of directors.

Ouellette said he and his wife are unsure how they will spend the winnings.

“I really don’t know; we want to to do some traveling and then I don’t know — probably our kids and our grandkids will get the most of it,” Ouellette said. “We got two girls, and we got four grandchildren.”

Ouellette offered some advice to others who hope to win a million dollars in lottery winnings one day.

“The only thing I can say is, if you want to win, you have to play.”

As the Maine Turnpike expects 1 million travelers alone over the Labor Day weekend, policymakers are gearing up for a sprint to solve one of the state’s most intractable problems: a long-standing — and growing — transportation funding gap.
Apex Weather END_OF_DOCUMENT_TOKEN_TO_BE_REPLACED

The Valley will receive an inch or less of accumulation from Thursday's system based on current forecast model data.
Our Sponsors END_OF_DOCUMENT_TOKEN_TO_BE_REPLACED