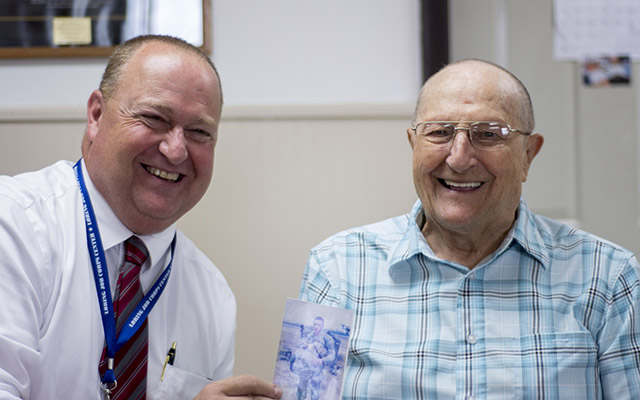 Chris Bouchard • July 30, 2018
Korean War veteran Joel Theriault, 88, of Caribou recently embarked on a flight to the nation’s capital through the Honor Flight Maine program, which treated him and dozens of Maine veterans like royalty throughout the trip and as they visited historical sites and war memorials, including the Korean War Memorial, Arlington National Cemetery, and Fort McHenry, which inspired the Star-Spangled Banner.

CARIBOU, Maine — Korean War veteran Joel Theriault, 88, of Caribou recently embarked on a flight to the nation’s capital through the Honor Flight Maine program, which treated him and dozens of Maine veterans like royalty throughout the trip and as they visited historical sites and war memorials, including the Korean War Memorial, Arlington National Cemetery, and Fort McHenry, which inspired the Star-Spangled Banner. 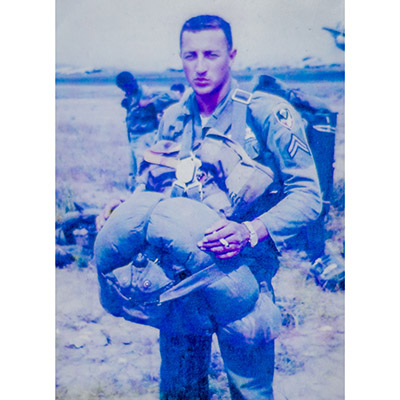 Joel Theriault, pictured here at 23 years old in Korea in 1953, recently embarked on a Maine Honor Flight to the nation’s capital and Korean War Memorial where, 65 years later, he met Koreans who were freed during the conflict. (Courtesy of Joel Theriault)

Theriault was accompanied by VFW Post 9389 Commander and Gulf War Veteran Roger Felix, who acted as his “guardian” and helped escort him to and from various tours and activities.

“If it wasn’t for him,” said Theriault, who served as state commander of the Maine VFW from 1980 to 1981, “this never would have happened. He pushed and pushed and pestered them until I got on that flight.”

Several times each year, Honor Flight Maine provides about 40 veterans an all-expenses-paid trip to the nation’s capital to visit sites many of them otherwise might have never seen, even though many of the memorials were constructed to honor them.

But Felix said that Honor Flight Maine has prioritized World War II veterans for previous flights and has just now begun to include Korean War veterans. Because there are still Maine WWII vets who have not gone on the trip, he said there were some difficulties in getting Theriault on this flight.

“I didn’t really pester them,” he said. “I just kept up with them.”

“He just kept prodding until I got it,” Theriault added.

While Felix, who is a member of numerous veterans organizations, has made multiple trips to the nation’s capital, he said the Honor Flight was an unforgettable experience and he hopes to see more local veterans involved.

“I’ve never been a part of something like this,” said Felix, who as a guardian had to pay $500 for his own lodging and flight. “These guys were treated like gold. Even when you went down the aisle of the plane, passengers were clapping, whistling, and thanking them for their service.”

The reception was even greater upon their return to the Portland airport. Felix said the facility was so crowded that “you couldn’t even see the walls.” Theriault and roughly 42 other Maine veterans were high-fived and cheered on as soon as they left the plane. Then they encountered a horde of veteran biker groups, little league teams, and Boy Scouts. After getting off the elevator, Felix said they encountered another gauntlet of state pageant winners and posed for photos. Then, when they finally reached the main corridor, they were greeted by a group of Scotsmen playing drums and bagpipes in their honor.

“It was really impressive,” said Joel. “You’ll never forget it.”

Felix highly recommends the trip to local veterans. He said that World War II veterans with medical conditions are given top priority and that medical personnel are available at all times. He added that while most expenses and arrangements are taken care of by Honor Flight Maine, County vets and their guardians do need to take care of their own travel to the Portland airport. Any vets interested in the trip, or becoming a guardian, can visit online honorflightmaine.org/applications for more information.

Highlights for Theriault included “mail call,” traveling by police escort, and an emotional visit to the Korean War Memorial.

“These guys’ generation of service was different than mine,” said Felix. “Mail call was big for them, you had to wait months to get a letter back then.”

In the Korean War, Theriault said he and his fellow soldiers experienced mail call “at least once a month.”

Honor Flight organizers reached out to families and friends of each veteran prior to their departure and amassed hundreds of letters in order to surprise them during the trip. For the first time in over sixty years, Theriault once again heard “mail call” and received 16 to 17 letters from his loved ones, fellow veterans, and state representatives.

“It didn’t dawn on me until I got that envelope in my hand and opened it up,” he said. “I thought, ‘That reminds of the time I was over there.’”

The last time Theriault heard mail call was in 1953 on a plane headed home from Korea.

Their trip to Baltimore from Washington, D.C., was taken in two buses escorted by capital police. Both Felix and Theriault said the police ensured no time was wasted during the commute.

“The police were not playing,” said Felix.

“They were pushing cars off the side of the road left and right,” said Felix. “It was such a highlight that people were actually coming from the back of the bus to look out the big window.”

As soon as they hit the interstate, police rushed in front of them, forcing all cars to pull over.

“I don’t know the jurisdiction of the capital police,” said Felix, “but they escorted us all the way to Baltimore which I think is outside their jurisdiction.”

“It was supposed to be an hour-long ride,” said Theriault, “and we were there in 35 minutes.”

The Honor Flight crew, consisting mostly of Korean War vets, met many Koreans freed during the conflict while visiting the memorial.

“These guys,” said Felix. “I don’t know how they held it together.”

“They were literally coming up to them guys saying, ‘I would not be free. I probably wouldn’t be alive if it weren’t for your people there,” said Felix. “I don’t want to speak for Joel but, for a lot of them, I heard that it meant something, that the circle was closed, that their service actually benefited mankind.”

Felix said he met a first generation Korean-American man in his fifties, who came to America and just finished sending his son through a military academy to make sure they “pay back” American soldiers for their sacrifice.

“It sent a chill down my spine,” said Felix. “This guy immigrated to the U.S., has a kid, and his kid decides to serve his Country. America is their home now.”

As a veteran himself, Felix said the trip as a whole gave him the “full measure” of sacrifices made on behalf of the United States.

“There’s a whole lot of people besides me who carried a weapon and defended this country,” he said.

A cold front will approach tomorrow with a chance for snow showers through the day into the evening. The front is expected to move through tomorrow night with another Arctic air mass.
Crown Politics END_OF_DOCUMENT_TOKEN_TO_BE_REPLACED

Three candidates are vying for two seats on the Fort Kent Town Council. Voters will decide which of the three -- Corey Pelletier, Brandon Dayton or Andrew Caron -- will get a seat during the town’s annual election on Monday, March 22.
Our Sponsors END_OF_DOCUMENT_TOKEN_TO_BE_REPLACED