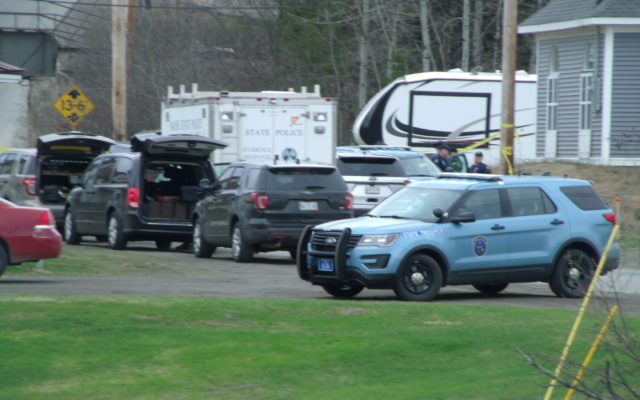 Jen Lynds, BDN Staff • May 4, 2018
A Maine State Police sergeant shot a man during an armed confrontation in Oakfield Friday as officers were trying to arrest the suspect in an ongoing case, according to police.

OAKFIELD, Maine — A Maine State Police sergeant shot a man during an armed confrontation in Oakfield Friday as officers were trying to arrest the suspect in an ongoing case, according to police. The wounded man, 54-year-old John Corneil of Smyrna, was taken to Houlton Regional Hospital to be treated. No one else was injured.

Steve McCausland, spokesman for the Maine Department of Public Safety, confirmed Friday afternoon that the shooting happened near the Oakfield Thriftway on Main Street just after 11 a.m.

He said that three state troopers went to the store to arrest Corneil as part of an ongoing investigation. An armed confrontation between the man and Sgt. Chad Fuller ensued outside the store, and the suspect was shot, McCausland said in a press release issued Friday afternoon. No other details about the shooting or why Corneil was wanted were released. 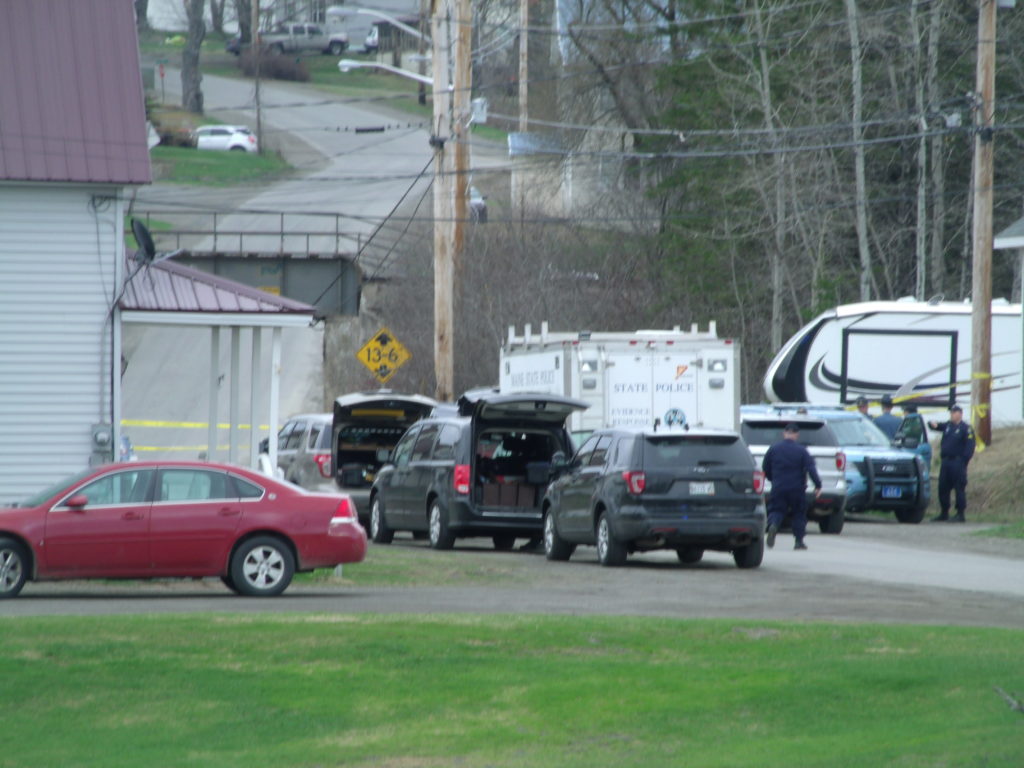 The Maine State Police Crime Scene Unit and state police investigators gather on the Ridge Road in Oakfield Friday near where an officer shot a man during an armed confrontation. (Jen Lynds | Houlton Pioneer Times)

Under standard procedure, Fuller, a 20-year veteran of the state police has been placed on administrative leave with pay pending an investigation by the state attorney general’s office.

U.S. Border Patrol Agents blocked off access to Ridge Road leading to the Oakfield Thriftway, shortly after the shooting occurred. They were diverting traffic around the road Friday afternoon. Down the road leading to the store, blue lights were visible surrounding the scene. Residents continually stopped their cars to question the agents.

Corneil was no stranger to law enforcement. According to a criminal history record obtained from the State Bureau of Identification, he was arrested in June 2008 for refusing to submit to a warrant for his arrest. No information was provided about the reasons for the warrant, but the record indicates Corneil was sentenced to 48 hours in jail and fined $250.

He was sentenced in March 1999 to two years in prison with all but 45 days suspended, on a charge of criminal threatening with a dangerous weapon, for firing at a state police officer who tried to serve him with an arrest warrant in late August 1998. 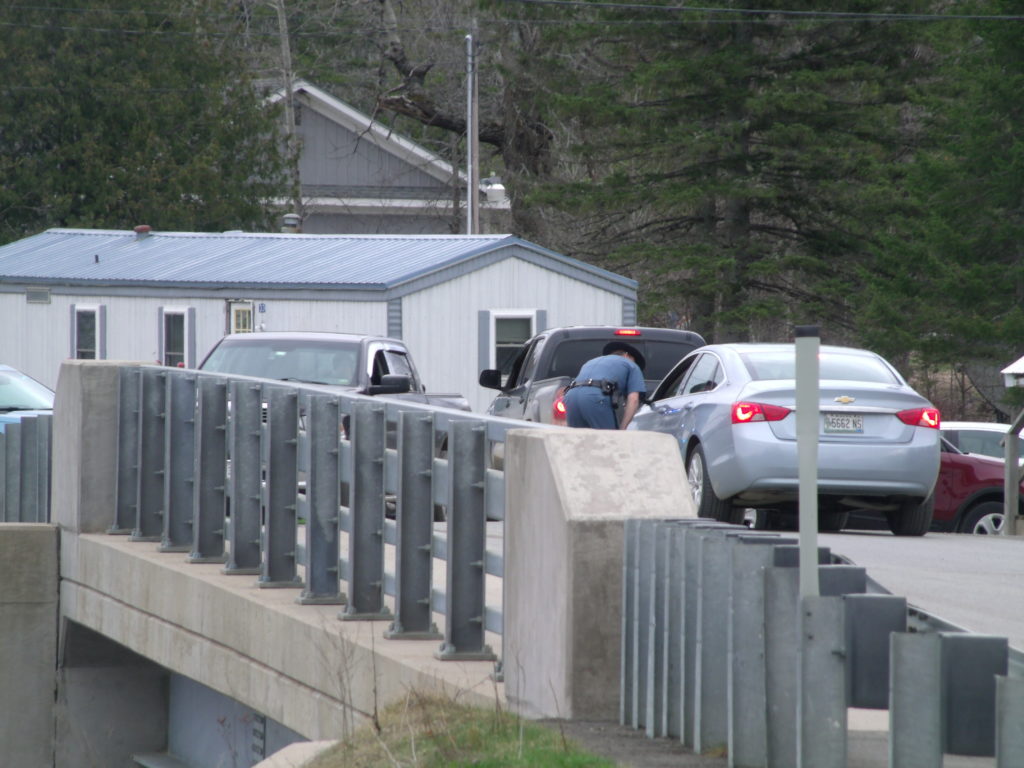 A Maine State Police trooper talks to residents on the Ridge Road Friday, May 4, near where a trooper shot a man during an armed confrontation. Police were trying to keep people away from the area as they investigated the shooting. (Jen Lynds | Houlton Pioneer Times)

According to archives from the Bangor Daily News, Corneil barricaded himself in his Merrill house on Route 212 for four hours when the trooper tried to serve him with the warrant. That warrant stemmed from his failure to appear in court on charges connected to a police chase earlier that summer when Corneil was charged with assault on an officer, according to the BDN archives.

On Friday, residents of Oakfield questioned what had happened at the popular grocery store in their peaceful southern Aroostook community.

Kirby Hardy Sr., who owns a redemption center in town, said that he remembered Corneil as “a really nice guy in high school.” But he said over the years “his yard has always been full of blue lights.”

Hardy said that he had heard that police were looking for Corneil and that there had been an increased presence of police in town over the last few days.

The redemption center is just a short distance away from where the shooting occured and Hardy was surprised that he did not hear any gunshots on Friday.

“You’d think that I would have,” he said. “But during the afternoon, I saw a number of police cars rush by, and then an ambulance rushed in.”

Mariah Lane, who has worked at the Thriftway for three years, was not on the job Friday. She said that she hadn’t seen Corneil at the store since September but that she always felt uncomfortable when he was around and that fellow employees at the store had told her to be cautious around him.

Jon Porter, principal at Southern Aroostook Community School, which is located about three miles away, said Friday afternoon that the school was notified by police, but no lockdown procedures were initiated.

“By the time we heard about it, it was over,” Porter said. “Law enforcement notifies us if they need us to lockdown. We have our standard procedures of keeping outside doors locked and any visitor needs to buzz to get in the building.”

Writer Joseph Cyr of the Houlton Pioneer Times contributed to this report.

As the Maine Turnpike expects 1 million travelers alone over the Labor Day weekend, policymakers are gearing up for a sprint to solve one of the state’s most intractable problems: a long-standing — and growing — transportation funding gap.
Apex Weather END_OF_DOCUMENT_TOKEN_TO_BE_REPLACED

A cold front moved through the Valley early this morning, and it will be followed by an Arctic cold front this afternoon.
Campaign Corner END_OF_DOCUMENT_TOKEN_TO_BE_REPLACED

U.S. Senator Angus King (I-Maine) today visited with students at the University of Maine at Fort Kent (UMFK) to discuss his work in Maine and Washington and answer questions from students.
Our Sponsors END_OF_DOCUMENT_TOKEN_TO_BE_REPLACED