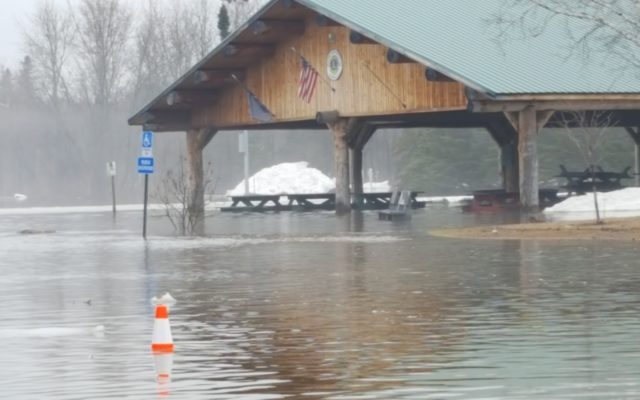 A river gauge indicated that the St. John remained near flood levels into early Sunday morning before water levels receded to about 22.2 feet under sunny skies Sunday afternoon.

Just before noon Sunday, the NWS canceled its flood warning, which had been in effect for a couple of days, for both the St. John and Fish rivers at Fort Kent. An earlier forecast called for the St. John River to crest at about 23.1 feet — a half foot above flood stage — just after midnight. 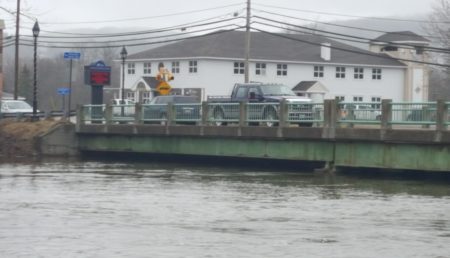 A swelling Fish River flows just under the Fish River Bridge in Fort Kent as vehicles drive across at about noon Saturday.
Andrew Birden|Fiddlehead Focus

The Fish River, which has a flood stage of 11 feet at Fort Kent, crested at 10.9 feet around 1 a.m. Sunday but started receding later that morning and was at 10.6 feet at about 2 p.m., according to the weather service.

However, a flood warning remained in effect until further notice for the Mattawamkeag River above Mattawamkeag, where minor flooding continued Sunday with water levels at 15.5 feet, 2 feet above flood stage of 13.5 feet. At 15 feet, the river flooded and shut down the Bridge Road in Haynesville in southern Aroostook on Saturday, according to the NWS and Aroostook County Emergency Management Agency.

Observation charts on the NWS web site showed the Aroostook River cresting below flood stages Saturday at both Masardis and Washburn and gradually dropping through the day Sunday. The Penobscot River, which crested Friday, continued over the weekend to drop below problem levels, the NWS reported.

“A half inch or more of rain is expected in many spots [Sunday] evening into early Monday morning, and could briefly delay decreases in river levels. However, significant rises back to flood stages don’t appear likely at this point,” the NWS stated early Sunday on its web site. Meteorologists reasoned that most of the snowpack had already melted and would not be adding to the runoff. 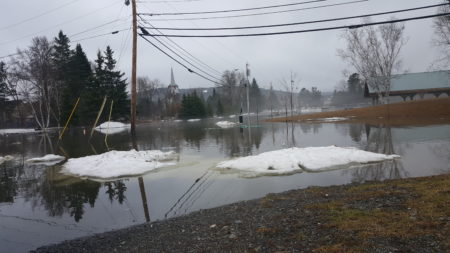 Heavy rain and rapidly melting snow on Thursday caused streams, brooks and culverts to overflow, shutting down a number of roads in The County, including Henderson Road west of Easton and Currier Road in Fort Fairfield.

Rising water levels on Madawaska Stream isolated some people in Westmanland in Aroostook on Friday causing game wardens to use a Maine Warden Service airboat in the afternoon to evacuate one woman from her home. They used the airboat to bring supplies to others in the area after the flood waters made Little Madawaska Lake Road impassible.

Shortly after 3 p.m. Saturday, the NWS canceled a flood watch that had been in effect since Thursday for most of northern Maine, including northern Penobscot and Piscataquis counties.

As the Maine Turnpike expects 1 million travelers alone over the Labor Day weekend, policymakers are gearing up for a sprint to solve one of the state’s most intractable problems: a long-standing — and growing — transportation funding gap.
Apex Weather END_OF_DOCUMENT_TOKEN_TO_BE_REPLACED

The Valley will receive an inch or less of accumulation from Thursday's system based on current forecast model data.
Our Sponsors END_OF_DOCUMENT_TOKEN_TO_BE_REPLACED