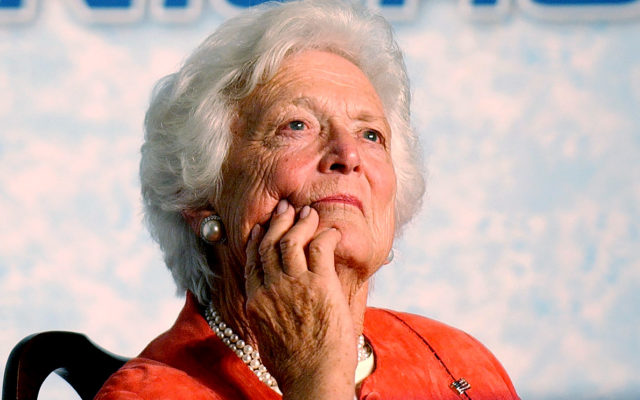 Governor Directs Flags to Half Staff in Memory of Barbara Bush

Ben Pinette • April 18, 2018
As a mark of respect for the memory of Barbara Bush, Governor Paul R. LePage has directed that all United States flags and State of Maine flags shall be flown at half-staff immediately until sunset on the day of interment.

AUGUSTA, Maine — As a mark of respect for the memory of Barbara Bush, Governor Paul R. LePage has directed that all United States flags and State of Maine flags shall be flown at half-staff immediately until sunset on the day of interment.

The former first lady passed away Tuesday in Houston at age 92.

“Ann and I send our deepest condolences to the Bush family upon the passing of First Lady Barbara Bush,” said Governor LePage. “Mainers hold a special place in our hearts for President and Mrs. Bush, and we will treasure our memories of her time spent in our state. She was a wife, mother, grandmother, great-grandmother, military spouse, former First Lady and a strong advocate of family. America has lost a great friend.”

Messages of condolence have included these from Maine:

U.S. Sen. Susan Collins (R-ME):  “Barbara Bush was a great First Lady, a terrific advocate for literary programs and the Barbara Bush Children’s Hospital in Portland, and a strong woman who loved her family, the State of Maine, and our country. I first met Mrs. Bush in 1994 when I was running for governor, and she campaigned with me.  Since that time, I have been fortunate to have had her as a friend as well as a stalwart supporter. Every summer for more than 20 years, I have visited President and Mrs. Bush at their Kennebunkport home. It was always one of the highlights of the year. I shall miss those delightful visits with her. My heart goes out to President Bush and to the entire family.”

U.S. Sen. Angus King (I-ME): “First Lady Barbara Bush was a true American, leader, mother, and wife whose lifelong commitment to universal literacy improved the lives of generations of American children. In Maine, many of us were fortunate to spot her as she walked the beach in Kennebunkport over the years, and her connection to our state, her deep concern for the wellbeing of its children, and her unwavering generosity has helped provide care for thousands of children throughout Maine at Barbara Bush Children’s Hospital. With grace and devotion, she proudly served our country and its citizens. Mary and I join the state of Maine and a grateful nation in keeping the First Lady and the entire Bush family in our thoughts during this difficult time.”

Congresswoman Chellie Pingree (D-ME): “Mrs. Bush was a remarkable woman whose compassion touched the lives of many– she held a special place in our country and especially here in Maine.  … The former First Lady’s commitment to Maine was always apparent through her donation of time and resources to the Maine Literacy Volunteers, the Barbara Bush Children’s Hospital at Maine Medical Center, and the University of New England’s George and Barbara Bush Center.  Her legacy will live on through her family and her charitable works. Our thoughts remain with the Bush family during this sad time.”

Representative Bruce Poliquin (R-ME): “I’m saddened by the passing of First Lady Barbara Bush. Thank you for being an inspiration to so many in Maine and across our nation. May you rest in peace. My prayers go out to the entire Bush family tonight.”

Bishop Robert E. Deeley of the Roman Catholic Diocese of Portland: “On behalf of the diocese, I offer my prayerful sympathy to the Bush family at this difficult time. Our state of Maine has lost a radiant presence of goodness and generosity. She approached life with humor and kindness, thus showing us how to live with the triumphs as well as the losses and sorrows that life presents. A woman of faith and humility, Mrs. Bush was always quick to help the least among us throughout her life, and she died as she lived, with courage and grace. May she be at peace with the Lord.”

Former U.S. Senator Olympia J. Snowe and former Maine Governor John R. McKernan, Jr: “The nation has lost a remarkable woman and one of the most respected and revered First Ladies in America’s history.  Our thoughts and most heartfelt prayers go out to President George H.W. Bush, President George W. Bush, and the entire family at this time of profound sadness. Throughout her life, Barbara Bush personified the kind of strength of character that is built on the pillars of family, faith, and friends.  As a loving wife for more than 70 years to a U.S. President and full partner in that extraordinary team; the mother of another President and of children who all grew to embrace the ideals of service; and an invariable force of nature in her own right, Barbara Bush never missed an opportunity to give back to the country she loved.  We are all blessed to have had the benefit of her influential voice and her immeasurable contributions.”

High pressure will bring mostly clear to partly cloudy skies to northern Maine today and tonight as low-pressure slides east of the region in the southern part of the state.
Campaign Corner END_OF_DOCUMENT_TOKEN_TO_BE_REPLACED

Dale Crafts filed his nomination papers for Feb. 21 with the Secretary of State to officially be placed on the primary ballot on June 9, 2020, for the U.S. House of Representatives 2nd District race.
Our Sponsors END_OF_DOCUMENT_TOKEN_TO_BE_REPLACED