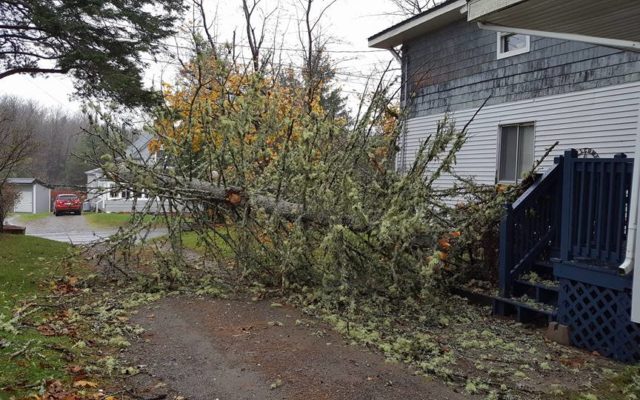 Because of the scope of the outages and destruction elsewhere across the state, however, recovery was slow to start, but utility companies were beginning to restore power. Several schools and businesses reopened after they were forced to close Monday.

The damage caused by the storm’s heavy winds and rains is being considered more destructive than the ice storm that froze Maine in its tracks in 1998.

In the immediate aftermath of the storm, crews focused on de-activating downed lines to reduce public safety risks. That limited their ability to restore power to customers. On Tuesday morning, nearly half of Maine’s electricity customers remained without power.

After reaching a peak outage number of more than 390,000 customers Monday, Central Maine Power was able to restore power to more than 30,000 customers, exceeding the projected possibility the company set for Monday. In a news release Monday night, CMP spokeswoman Gail Rice said the company achieved its primary goal of restoring power to hospitals.

Rice said crews would be working Tuesday to restore power to additional customers and that they they also hoped to have a better timeline for recovery, which could take at least a week in some areas.

Tuesday morning, Emera Maine reported more than 62,000 customers without power, down from a peak of over 89,000.

Central Maine Power said downed trees and flooded roads made it difficult to get to areas that needed repair, adding that the damage from the storm was unprecedented.

“This storm left us with the largest number of outages in the company’s history, even higher than the 1998 ice storms that many of us remember,” Rice said.

For the second day in a row, Amtrak’s Downeaster rail service between Boston and Brunswick also was suspended.
The high winds also did damage in Maine’s harbors, especially the Waldo County city of Belfast, where at least six vessels broke from their moorings, reducing them to rubble as they smashed on the rocks.

Only one member of Maine’s congressional delegation had come out in favor of impeaching President Donald Trump ahead of House Speaker Nancy Pelosi’s Tuesday announcement that the Democratic-led House of Representatives would begin an impeachment inquiry.
Apex Weather END_OF_DOCUMENT_TOKEN_TO_BE_REPLACED

Dale Crafts filed his nomination papers for Feb. 21 with the Secretary of State to officially be placed on the primary ballot on June 9, 2020, for the U.S. House of Representatives 2nd District race.
Our Sponsors END_OF_DOCUMENT_TOKEN_TO_BE_REPLACED