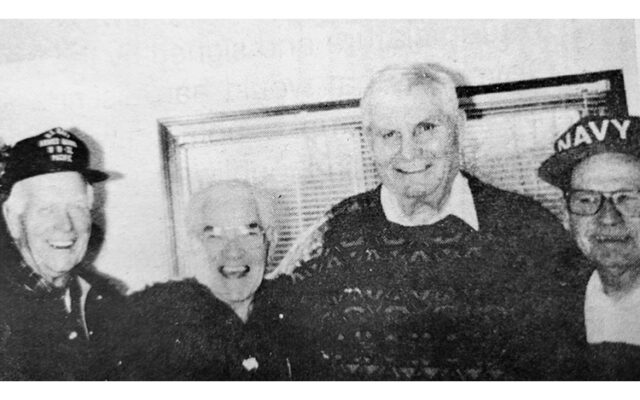 McDonald’s opens store — Ricky Chamberlain, an 11-year-old boy from Madawaska, officially opened the Madawaska McDonald’s on a Monday in January 1973 by cutting a ribbon on 25 $1 bills to be donated to the Acadia School which Ricky attends.

FK town office hosts a Christmas party — Approximately 50 children gathered around the Fort Kent Town Office conference room on Friday, Dec. 19, 1998, for a Christmas party. Parents and friends joined in the fun as local musicians performed Christmas carols that led up to a surprise appearance from Santa Claus, who delivered presents and good cheer to everyone in attendance. The participating children also had a chance to socialize with plenty of snacks and drinks in between a Christmas story, a craft session, and a drop-off of food or gifts that were delivered to local families.

Steel spans new international bridge project — Workers have nearly completed installation of the large steel girders that will underlie the roadway of the new international bridge between Fort Kent and Clair, New Brunswick. Bernard Hache, a spokesperson with the New Brunswick Department of Transportation and Infrastructure, said that after the steelwork is complete, crews will begin assembling the forms to create the actual bridge deck. Hache also said the $13.9 million project is on budget and on time to be completed by August 2014. After the new bridge is completed, removal of the current bridge will commence.

Maine’s longest serving legislator, Martin was first elected to the Maine House of Representatives in 1964 when he was 23.
Our Sponsors END_OF_DOCUMENT_TOKEN_TO_BE_REPLACED