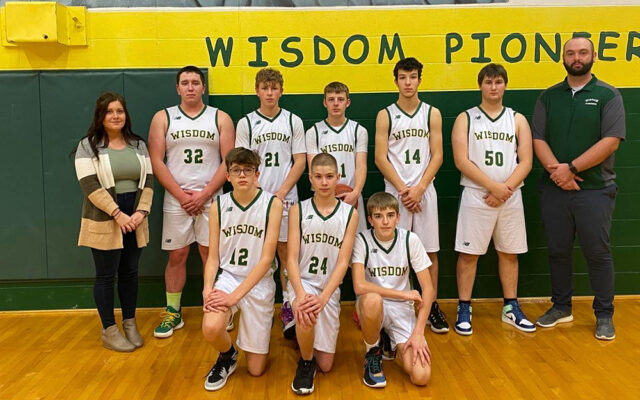 Wisdom boys could be underdogs to watch

Contributed • December 23, 2022
If there is an underdog team in Class D North boys this year, it could very well be the Wisdom Pioneers, according to their coach, Nate Boynton.

ST. AGATHA, Maine – If there is an underdog team in Class D North boys this year, it could very well be the Wisdom Pioneers, according to their coach, Nate Boynton.

Nevertheless, this small team of eight players, including two eighth-graders, is one to watch.

“I think we’ve got a good group of guys that a lot of teams will underestimate,” Boynton said. “I think that we can surprise a lot of people and make a deep playoff run.”

Last year, the Pioneers were coached by Dom Rossignol and went 11-5 on the regular season, earning them the fourth seed in Class D North. The Pioneer crushed No. 13 Ashland, 94-45, in a preliminary round and defeated No. 5 Bangor Christian, 46-44, in a thrilling quarterfinal at the Cross Insurance Center.

Unfortunately, Wisdom lost Carter Pelletier and Connor Thamsen to graduation last year. Boynton said their leadership will be missed this season. He described Pelletier as “a career 1,000 point scorer who could get a bucket basically whenever needed.” And Boynton said Thamsen was “a lead-by-example kind of guy.”

Wisdom’s speed and athleticism are a few primary strengths of the Wisdom boys, who can read one another well on the floor.

“This is a good experienced core who have played together since they were in fifth grade, so the chemistry on the court is something that comes naturally to this group,” Boynton said.

The Pioneers will have four returning players as well as one new addition to the starting lineup.

“Kaden Daigle will be manning the middle,” Boynton said. “Strong and athletic, he’ll be asked to defend the rim and rebound the basketball as well as work in the post on offense.”

Boynton said he will look to scoring guard Domininc Gendreau to get some key baskets, draw the attention of the defense, and get his teammates involved.

“Logan Lagasse will be in the 3-and-D role, tasked with getting open off the ball to open up the middle, knocking down shots and defending the opposing teams key players,” Boynton said.

Point guard Camden Pelletier will be responsible for “initiating the offense as well as collapsing the defense to get his teammates open, or attack the rim himself,” according to Boynton.

Barrier, new to the team, will be charged with “setting screens, rebounding, and knocking down open shots.”

As team development is concerned, Boynton said he is working with the boys to increase communication and confidence.

“Communication on the court is something that can always be improved upon, so that has been a key area of focus,” he said. “Instilling confidence in some of the guys who haven’t been playing as long, or are stepping up into larger roles is also a focus point for this season.”

Boynton counts Southern Aroostook, Easton and Katahdin among teams who will be tough to beat this year.

“Southern Aroostook is pretty much the bar for Class D in the County over the past few seasons, you can always count on them finding their way towards the top come February,” Boynton said. “We also play Madawaska and Fort Kent who are tough, but give us some good competition in a class higher than ours.”

Maine’s longest serving legislator, Martin was first elected to the Maine House of Representatives in 1964 when he was 23.
Our Sponsors END_OF_DOCUMENT_TOKEN_TO_BE_REPLACED