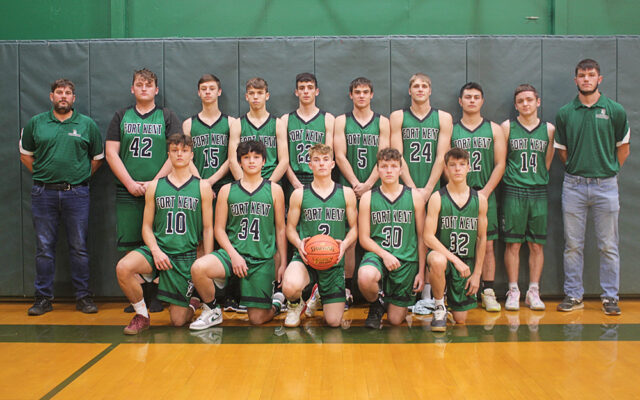 Jessica Potila, SJVT / FhF Staff Writer • December 23, 2022
The Fort Kent Community High School varsity basketball boys are not expecting an easy season, but they are prepared to face the challenge.

FORT KENT, Maine – The Fort Kent Community High School varsity basketball boys are not expecting an easy season, but they are prepared to face the challenge.

“Frankly, all of the teams we play are going to be strong this year,” Coach Chad Cyr said. “We have a tough schedule which is exactly what we want. We will definitely be in a lot of close games and the teams we play will win a lot of games. Hopefully we can win our good share of games as well,”

The Warriors are returning from a successful season last year where they held the No. 1 position with a 17-1 regular season record. The team won a preliminary playoff game against No. 16 Central Aroostook, 64-42,  and defeated No. 8 Calais, 59-39, in the quarterfinals at the Cross Insurance Center in Bangor.

The team also lost a legendary coach with the retirement of Larry Murphy, who served as assistant coach to the Warrior boys.

“He was a great asset to the team. As a new coach I was very fortunate to have coach Murph with his passion, heart, and of course experience by my side for the past few years,” Cyr said.

Former Warrior athlete and 1,000 point scorer Caleb Delisle, older brother of Austin Delisle, has taken over as assistant coach. Cyr said Caleb Delisle has “mighty big shoes to fill,” but is off to a good start.

“He has fit right in and we couldn’t have asked for a better candidate. The boys like him, respect him, and he brings in a very high basketball IQ,” Cyr said.

The Warriors’ greatest strength is the work ethic of the student athletes, according to Cyr.

“They fight, scratch, claw and just never give up. I believe that is our culture as Warriors and it gives us an edge on a lot of teams,” he said. “We are very senior and junior heavy with great leadership in those classes as well.”

Improving on defense will be an area of focus for the Warrior boys this year. The starting lineup is likely to include Drew Deschaine, who Cyr said has some substantial height and lots of skill.

“He can work in the low post, is a good rebounder and a solid mid-range shooter. He is currently working on stretching the court which will be a tremendous asset,” Cyr said.

Ethan Daigle is also a potential starter who Cyr described as a very well-rounded player.

“He is a great shooter with slashing ability. He sees the floor really well and is a good defender,” Cyr said.

Lance Gagnon is a potential starter with great length, according to Cyr. “He is very crafty around the rim, a great rebounder and can shoot the ball really well,” Cyr said.

“Great shooting capability,” could land Tyler Ryder a starting spot, Cyr said. “He also sees the floor really well and can get to the rim,” Cyr added.

The final potential starter is Keegan Cyr. “He is probably our best on ball defender with very quick hands and feet,” Cyr said. “He looks up the floor really well in transition and has a quick step to get to the basket in the half court.”

Another player to watch is Ethan Raymond, who is currently healing from a double surgery on his shooting shoulder. “He gave us some quality minutes last year and everyone can most likely look forward to seeing him with lots of minutes at the turn of the year when he’s all healed up,” Cyr said.

Maine’s longest serving legislator, Martin was first elected to the Maine House of Representatives in 1964 when he was 23.
Our Sponsors END_OF_DOCUMENT_TOKEN_TO_BE_REPLACED