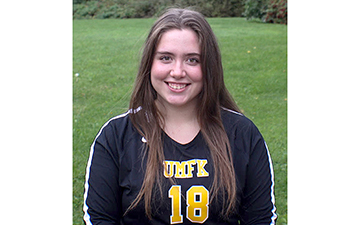 Contributed • December 10, 2022
The University of Maine at Fort Kent was well represented with awards for high-achieving athletes and coaches at the 2022 USCAA National Conference in November.

FORT KENT, Maine — The University of Maine at Fort Kent was well represented with awards for high-achieving athletes and coaches at the 2022 USCAA National Conference in November.

Jermaine West is the USCAA Women’s Soccer Coach of the Year. West stepped in to fill the head coach role late into the season, but made an immediate impact. His players connected immediately and they hit the ground running with a successful season that ended with the USCAA national championship.

“This is not a team; this is a family. Coaching this group, I couldn’t ask for anything more. It was a pleasure to work with this group of ladies and if I could go back and do it all over again I would without hesitation,” said West.

Tara Kelley is the USCAA Women’s Volleyball Coach of the Year. 2022 was Kelley’s second season. In addition to a 16-game win streak, she elevated the volleyball program to a runner-up finish. She was able to mix in several new athletes with the returners and create a cohesive group.

“This team was built differently from the start,” Kelley said. “They have the leadership, encouragement, positivity, and energy that every team strives for. With every game, win or loss, they found positives that they reflected on. They also found things they individually needed to work on.”

Beatriz (Bea) Garrido Jaramillo is the USCAA Student-Athlete of the Year. Beatriz  is slated to graduate in the spring of 2023 with a bachelor of science degree in behavioral science (MHRT/C concentration) with a minor in criminal justice. The senior volleyball setter is not only a leader on her team, but also serves as the SAB president, student senate secretary, and helps out anywhere she is needed. Her high GPA also has her on the All-Academic Team.

“Bea is a great ambassador of UMFK. She embodies everything you want in a student-athlete,” said UMFK Athletic Director Carly Flowers. “She is a good teammate and heavily involved on campus. I have enjoyed getting to know Bea and watching her compete. This honor is very much deserved!”

A weak area of low pressure will move across the Gulf and to the east today.
Crown Politics END_OF_DOCUMENT_TOKEN_TO_BE_REPLACED

Maine’s longest serving legislator, Martin was first elected to the Maine House of Representatives in 1964 when he was 23.
Our Sponsors END_OF_DOCUMENT_TOKEN_TO_BE_REPLACED