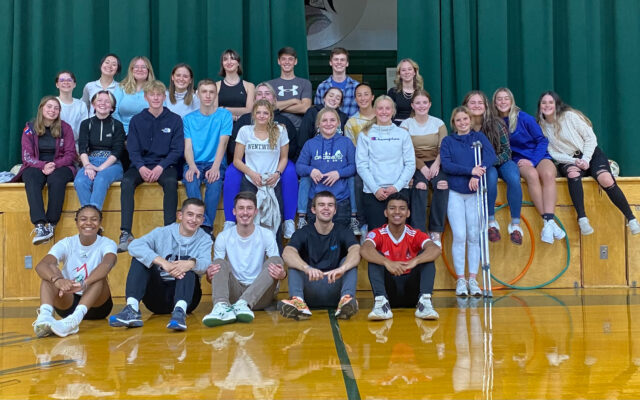 Jessica Potila, SJVT / FhF Staff Writer • November 28, 2022
Students living an ocean apart came together for the first time since 2019 when the French exchange program returned to Fort Kent Community High School after being halted by the pandemic.

FORT KENT, Maine – Students living an ocean apart came together for the first time since 2019 when the French exchange program returned to Fort Kent Community High School after being halted by the pandemic.

A dozen “terminale” students, the equivalent of seniors in the United States, from Cholet, France, spent nearly two weeks this month living with host families in the St. John Valley while attending French language classes at the Fort Kent high school.

Fort Kent French teacher Robert Daigle is passionate about the exchange program, which he initiated.

“It adds an element of reality to their study of the language; it gives it a real-world context,” Daigle said. “It’s also so much more fun to practice the language with a peer.” 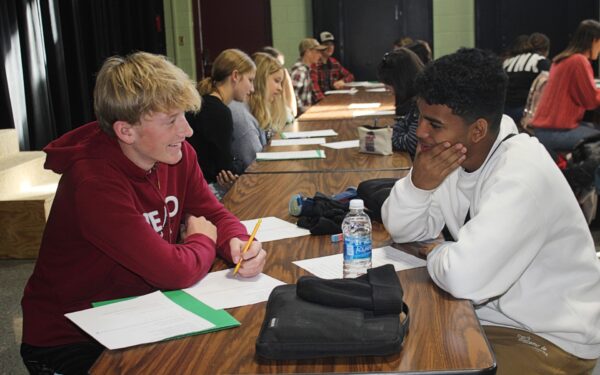 But the students on both sides of the ocean discovered they have more in common than the study of French and a shared teenage experience. Many are distantly related.

In 2017, Daigle and his students researched the ancestry of many St. John Valley family names and discovered an ancestral connection directly linking Fort Kent to Cholet.

Daigle said between 15 and 25 percent of the students in the SAD 27 school district are the descendants of Louis Gaste dit Bellefleur, who left Cholet as a soldier in the French navy when he was 31 years old.

In 2011, Daigle applied for participation in the Maine-France Partnership Program through the Maine Department of Education and was partnered with educator Tanguy Vilboux at Lycee Europe Robert Schuman in Cholet. In 2013 the two schools on opposite sides of the Atlantic Ocean began exchanging students each year.

In March 2020, Fort Kent students were prepared to travel to Cholet but the SAD 27 school board canceled the trip when the newly discovered coronavirus, Covid 19, began spreading rapidly throughout Europe.

However, classrooms from the two schools continued to maintain contact through video exchanges and by sending gifts to one another.

“We didn’t let it die during COVID,” Daigle said of the exchange. 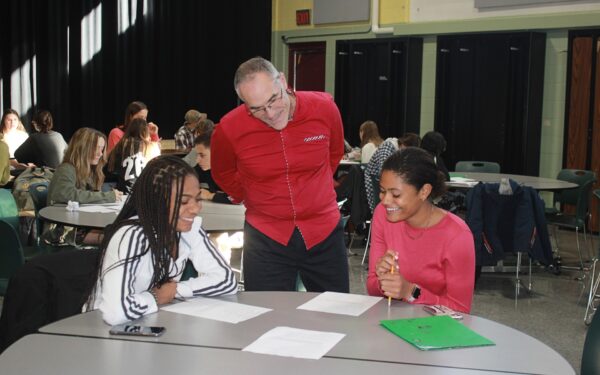 The experience allows the students from both communities to experience things they’d never be able to do in their hometowns, Daige said. And more than practicing their French language skills with one another, they also benefit socially.

Daigle pointed out that in France, family meals are so important that schools and businesses provide a one to two hour lunch break so that people can return home to eat with one another. In the United States, athletics are more valued by society than they are in France.

“The day is 24 hours long wherever you live on the planet, but what a culture chooses to prioritize in that time highlights what is important to that culture,” Daigle said.

Cholet student Manon Ly-huchet said she enjoys the forested landscape of northern Maine, as well as the friendliness of the area people.

“Everybody says ‘Hi, how are you?’ They will ask ‘Are you OK?’ and ‘How are you doing?’ In France it is not like that; we walk in the corridors and that’s it,” Ly-huchet said. “It’s important to see how cultures are different. We must be open minded.”

While learning about their differences, the students also learn more about themselves, according to Daigle.

“As we go through our day-to-day lives, we are so caught up in our routines that we often don’t take the time to reflect on our own language and culture.  An exchange with students from different political, geographic, linguistic and cultural realities sheds light on details about their culture and language that they did not realize were there,” Daigle said.

The students also learned they have a few things in common.

“As teenagers we are all experiencing changes, no matter where we are in the world,” Fort Kent sophomore Lily Oliver said. “We all enjoy social media, and connect to the world in the same ways.”

Fort Kent students are planning a return visit to Cholet in March 2023.

Maine’s longest serving legislator, Martin was first elected to the Maine House of Representatives in 1964 when he was 23.
Our Sponsors END_OF_DOCUMENT_TOKEN_TO_BE_REPLACED