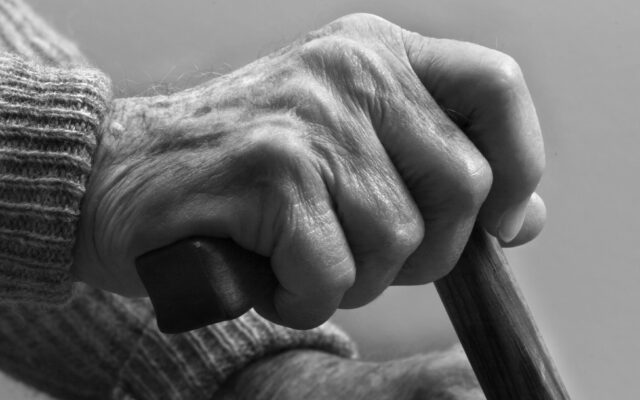 At 90 years old, Gerard Ouellette was presented with the Boston Post cane at the Grand Isle Historical Society annual meeting on Nov. 6.

The town of Grand Isle was one of the lucky recipients of a Boston Post cane.

Born at home in Lille on April 7, 1932, Ouellette was the baby of 14 children born to Magloire (Mack) and Anna (Roseanne Cyr).

“I’ve been the baby of the family all my life and now I’m the oldest in a whole town,” he said.

After high school he joined the U.S. Army during the Korean War. He trained at Camp Gordon in Georgia for four months to become Military Police to guard the prisoners of war. He unfortunately stepped on a booby trap, which caused him to become deaf, and he left the Army at that point.

He returned to Lille and married Benita Morin of Keegan on Nov. 26,1955. The couple will be married 68 years this month.

“”That’s a long time to the same person. We have four children (Dianne, Linda, Jerry, and Jimmy). Sadly, Jimmy passed away at the age of 35 in 2002. That was a hard year. I have six grandchildren and six great-grandchildren,” he said.

“I started farming potatoes with my brother on my father’s farm in Lille right after the Army. I farmed potatoes until I was 75 years old. I did not visit the doctor too much in my lifetime but that year I went to see the doctor to see if I should retire or if I was fit enough to keep farming. Well, to my surprise, the doctor said there was nothing wrong with me and if I retired now, it would probably lead to an early death.

“So I decided to keep farming but not potatoes because that’s too hard for an older person. I changed to farming oats and I did that until I was 81 and then I retired [after] 60 years in the farming business,” he said.

He also was a volunteer firefighter in Grand Isle for five years under Fire Chief Euclide Soucy. He was chairman of the Maine Potato Council for three years and a member of Agway, attending annual meetings for 15 years in Syracuse, New York.

In 1967 he joined the Knights of Columbus in Grand Isle and was a 3rd degree member. In 1969 he became a 4th degree member in Madawaska. He has been a Knight for 55 years.

He also was a substitute rural mail deliverer for the U.S. Postal Service for 13 years.

“I’ve also been a member of the American Legion in Madawaska for 36 years. I still like to snowmobile so I am a member of the Madawaska Snowmobile Club. In my younger days Benita and I would go ice fishing almost every day on Square Lake. We would leave with our snowmobiles from the back of the house in Lille. She loved to fish more than me,” Ouellette said.

“In the summertime, I still ride my ATV. I am still a member of the Grand Isle ATV Club. It keeps me young,” he joked. “I used to like to go dancing on Saturday nights. Benita and I went to the dance at Roland’s Rendez-vous a lot. We also enjoyed the music of Jean Boucher at the Madawaska Hotel. That wasn’t yesterday,” he said.

“I have been lucky all my life. I was born on April 7, which was also the birthday of Lucille Parent who held the Boston Post cane of Grand Isle before me,” Ouellette said.

He said he used to have animals at the farm but he and his wife gave them up. But they still plant a vegetable garden. They love the vegetables too much to give that up, he said.

“I’m lucky to still be able to live, along with my wife, in the house that I built,” he said. “So far we don’t need any helpers. I hope to be able to stay in Grand Isle for many more years.”

Heavy snow is expected to overspread the Valley this afternoon and continue into the evening hours.
Crown Politics END_OF_DOCUMENT_TOKEN_TO_BE_REPLACED

Maine’s longest serving legislator, Martin was first elected to the Maine House of Representatives in 1964 when he was 23.
Our Sponsors END_OF_DOCUMENT_TOKEN_TO_BE_REPLACED