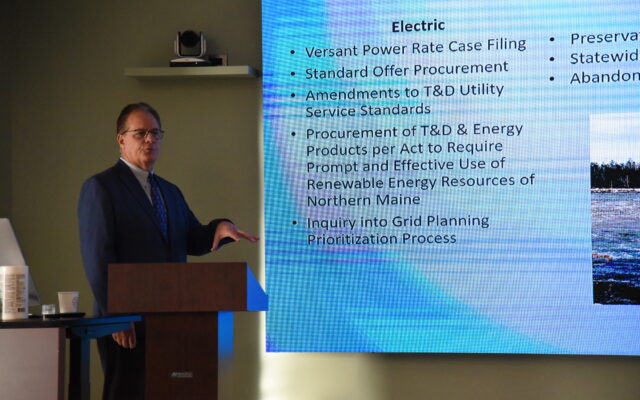 Paul Bagnall, • October 10, 2022
Northern Maine is already meeting Maine’s renewable energy goals with about 88 percent of its power coming from hydroelectricity through the Tinker hydroelectric dam on the Aroostook River and also New Brunswick.

PRESQUE ISLE, Maine — Northern Maine is already meeting Maine’s renewable energy goals with about 88 percent of its power coming from hydroelectricity through the Tinker hydroelectric dam on the Aroostook River and also New Brunswick.

For the transition to renewable energy, Maine will need more solar and wind power with storage because of the future high demand for electric vehicles and heat pumps in homes with smaller energy facilities that connect to the local distribution system, according to Maine Public Utilities Commissioner Patrick Scully.

The grid will need to be stronger to carry the electricity to customers, and withstand and recover quickly from more frequent storms from climate change, he said.

Maine’s climate goals — established by the state Legislature — include that 80 percent of the electricity that serves consumers comes from renewable energy by 2030. Aroostook County already exceeds that goal. Scully hopes that after transitioning to more renewable energy, costs will be stabler and not as volatile as natural gas price fluctuations have been.

“We’re talking about an investment, the cost of that transmission line with the upgrades that need to be done in the system that it connects to — so the power can actually get to market — we’re looking at a billion dollars, or in that neighborhood. So it’s not a small cost,” Scully said.

Scully discussed the rising costs of energy and what the transition to renewables would look like when he took part in an Eggs ‘n Issues session at the Edmunds Conference Center at Northern Maine Community College. Approximately 22 people from 15 different organizations were there to hear his talk.

The rest of Maine is not meeting the state’s 2030 goal yet because of the high amounts of natural gas used and some nuclear-generated energy, he said.

This year Maine PUC received bids on the transmission line on March 1, the generation bids on May 2, and under the law, Maine PUC has until Nov. 1 to pick the winning bidders and finalize contracts.

The incentive hasn’t been there to make a connection from northern Maine to the rest of New England, then there’s the cost of the transmission lines to connect northern and southern sectors of the state. There has been discussion of whether northern Maine should be electrically connected to the rest of Maine and New England for more access to energy sources other than New Brunswick.

“I think the real challenge is how do we get our energy consumption, mostly driving our cars and heating our houses, how do we get that off from oil and natural gas and carbon-based resources and get it electrified,” Scully said. “That’s going to mean more renewable power in the future and that’s going to mean a stronger grid to handle all of that extra demand.”

One possible outcome Scully went over was to get other states to pay a certain percentage of the transmission line to meet their renewable energy needs as well and decrease the burden on Maine ratepayers.

“We are going through a transition from an energy system that uses a lot of gas and oil and carbon resources to one that doesn’t, and that’s going to be a costly transition to make,” Scully said. “So we know there are going to be costs, we can’t avoid them, but what we really want to do is make the transition in the most cost effective way.”

Net energy billing has proven to be a strong subsidy but as a consequence there has been an explosion of community solar, with 319 megawatts online and 1,600 megawatts projects still being in development across Maine. This includes northern Maine, but the state has a total load of only 2,000 megawatts, according to Scully.

“I think understanding how energy is provided, because I think a lot of residents seem to think that Versant is 100 percent of the bill, and there are different parts of that bill that Versant is only a little piece of the rates that are going up,” Central Aroostook Chamber of Commerce executive director LaNiece Sirois said.

The next “Eggs N’ Issues” will be held on Dec. 14 with Office of the Public Advocate member William Hardwood.

Heavy snow is expected to overspread the Valley this afternoon and continue into the evening hours.
Crown Politics END_OF_DOCUMENT_TOKEN_TO_BE_REPLACED

Maine’s longest serving legislator, Martin was first elected to the Maine House of Representatives in 1964 when he was 23.
Our Sponsors END_OF_DOCUMENT_TOKEN_TO_BE_REPLACED