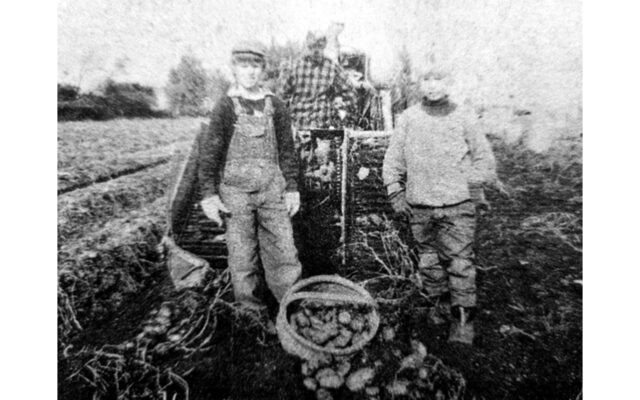 Dr. Chan has been practicing medicine in Fort Kent since July 1972. Van Buren has been searching for a doctor to ease the load for Dr. Labbe, who has been handling the ills of the Van Buren area sick by himself since Dr. Sanfacon left.

Call of the wild — Jim Clavette is living proof necessity is the mother of invention. Clavette used a simple oil funnel as a call to entice a 975-pound bull moose into the sights of his 30.06 rifle on the first day of Maine’s annual moose hunt. The retired policeman bagged the trophy on the Derosier farm in St. Agatha. Clavette has been working the past several weeks hauling potatoes in the area and had seen the moose on several occasions. It took him less than a half-hour after the official 6:14 a.m. start of the season on a Monday in 1997 to bring it down at 6:40 a.m. This was the first year Clavette had applied for a permit and his sub-permittee was his brother Richard Clavette of Madawaska. The rack on the animal measured out to 55.5 inches. With four days left in the season, Clavette said he plans on returning to hauling potatoes for the duration of the harvest.

New Van Buren port facility is 85 percent complete — The expanded Land Port of Entry on the U.S. side of the Van Buren and St. Leonard, New Brunswick, border crossing is approximately 85 percent completed, according to officials with the General Services Administration, the federal agency constructing the facility. The new border crossing facility has been under construction since June 2011. The previous structure, constructed in 1965, was damaged in the flood of 2008 and customs agents have been working out of temporary buildings since then. A 2010 International Border Crossing Feasibility Study indicated that from 1997 to 2008 an average annual value of $1.02 billion (Canadian) of two-way commercial traffic passed through the location.

Heavy snow is expected to overspread the Valley this afternoon and continue into the evening hours.
Crown Politics END_OF_DOCUMENT_TOKEN_TO_BE_REPLACED

Maine’s longest serving legislator, Martin was first elected to the Maine House of Representatives in 1964 when he was 23.
Our Sponsors END_OF_DOCUMENT_TOKEN_TO_BE_REPLACED